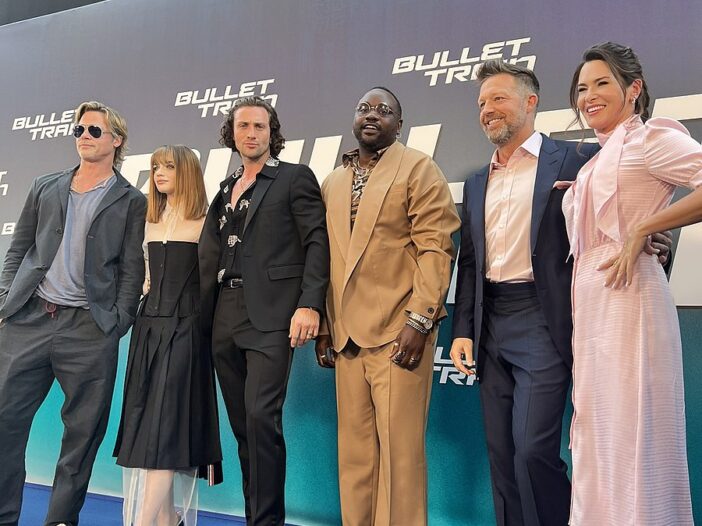 If you want to see Brad Pitt beat people up on a train in Japan, you’re in the right place.

“Bullet Train,” released Aug. 5, is the result of Hollywood’s top action minds behind hit movies like “Deadpool 2,” “John Wick” and “The Equalizer.” Based on the novel of the same name by Japanese author Kōtarō Isaka, “Bullet Train” tells the story of a group of hitmen and members of the yakuza, or a Japanese crime syndicate, stuck together on one of Japan’s famed Shinkansen — a.k.a. bullet trains. While the plot is generally barebones and confusing at times, “Bullet Train” provides enough frenetic, gory action and humor to serve as an entertaining weekend distraction.

In the film, Pitt plays a bounty hunter codenamed Ladybug, who is hired to retrieve a briefcase from a Shinkansen departing from Tokyo to Kyoto. Except, it turns out to not be so simple as multiple factions chase after the mystery briefcase, including two brothers codenamed Lemon (Brian Tyree Henry) and Tangerine (Aaron Taylor-Johnson), a Japanese man named Kimura (Andrew Koji) and a teenage girl named Prince (Joey King). Eventually — after hefty doses of action — the cast of characters meets the White Death, a ruthless yakuza leader who awaits at the train’s last stop in Kyoto.

While this fairly simple plot sounds exciting, the film often overcomplicates a story that most viewers likely neither expect nor want to be too complex. “Bullet Train” makes extensive use of flashbacks for even the most minor characters, and though they are sometimes used in an ironic manner, they still muddle the story and at times hinder enjoyment of the film.

Nevertheless, the film takes full advantage of its R rating, showcasing much of the same violent action that made “John Wick” famous. Blood spurts everywhere as characters are shot, bodies explode and limbs are sliced off without much hesitation.

The movie balances this violence with a darkly comedic tone; for instance, some of the film’s funniest moments occur when characters’ eyes are bleeding from snake poison. Childish gags about fruits and Thomas the Tank Engine further the hilarity through their jarring contrasts to bloody violence.

Additionally, the movie’s Japanese aesthetic — though it generally serves as window dressing — does help differentiate it from standard Hollywood action. The incorporation of martial arts and Japanese weapons breathes life into a genre dominated by shootouts and bombs.

Moreover, the film’s scathing and juvenile humor is expertly aided by the characters’ performances. Pitt drives “Bullet Train” forward, literally, as its nonchalant protagonist seeking to reform his life through positive thinking and mindfulness: unlike classic action protagonists, Ladybug does not bring a gun onto the train and tries his hardest to talk people down from their emotions rather than fight them. Pitt’s aloof presence drives the film’s heart and humor. The hitman brothers also offer hilarious banter, while Kimura’s father, the stoic former yakuza known only as the Elder (Hiroyuki Sanada), provides a strong commanding presence towards the end of the film.

For better and for worse, “Bullet Train” largely follows the vein of a standard R-rated action film. It does not reach the highs of its action-comedy brethren like the “Deadpool” films, but “Bullet Train” is a solid showcase for Brad Pitt’s post-Oscar career. Pitt is as alive as ever, adding an impressive new line to his resume — though maybe not as impressive as Ryan Reynolds’s comedic turn in “Deadpool.”

“Bullet Train” is a bloody ride that you definitely do not want to miss: all aboard.