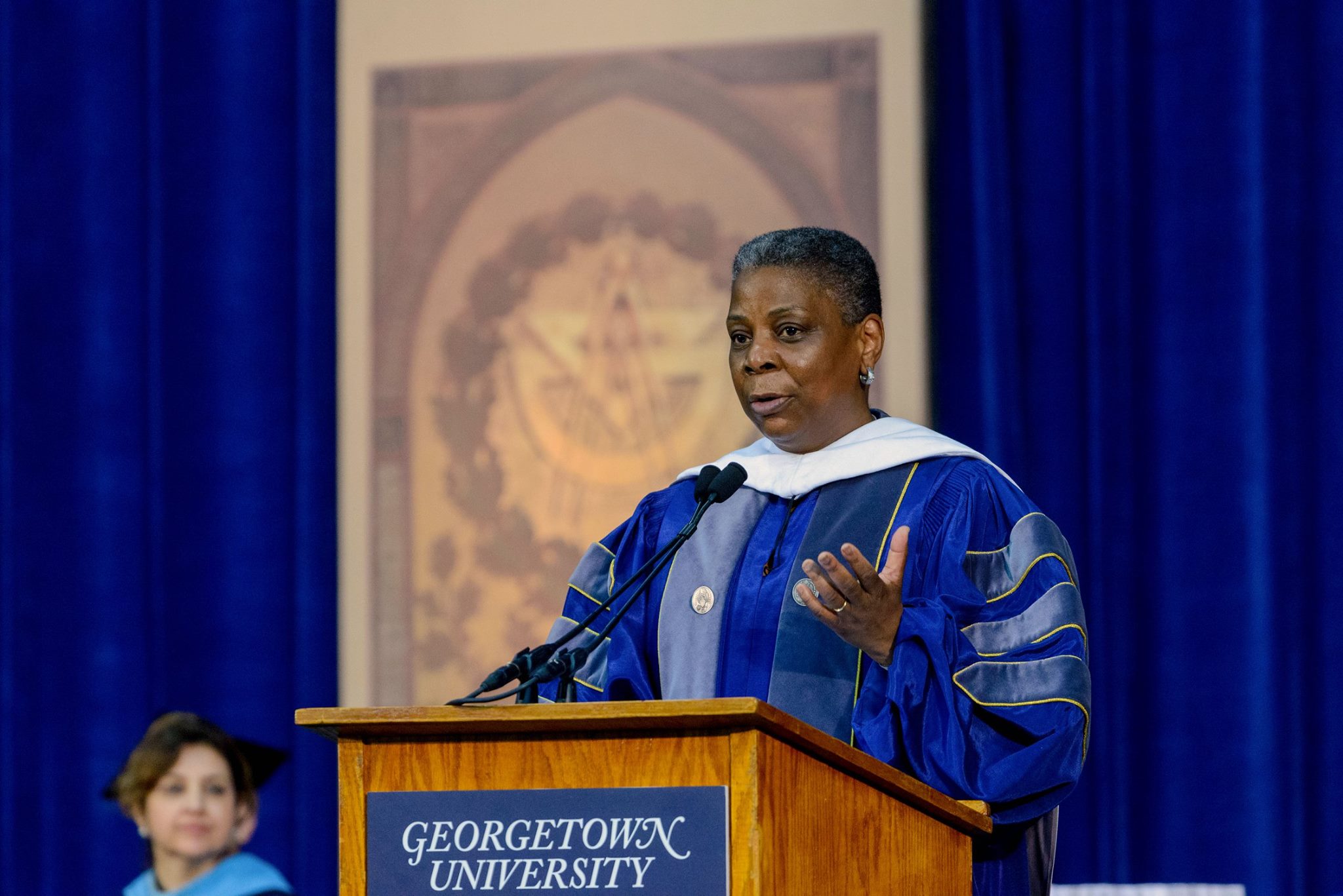 Using technology, recent graduates can work to forge a more equitable society, Ursula Burns, former chairman and CEO of Xerox, a business that provides print and digital document services, said in her commencement address to students of the Georgetown University McDonough School of Business on Friday.

Burns grew up in the Lower East Side of New York and worked her way out of an impoverished childhood, studying mechanical engineering at the New York University Tandon School of Engineering, then Polytechnic Institute of Brooklyn. She pursued her master’s degree in mechanical engineering at Columbia University. Burns was named CEO of Xerox in 2009, becoming the first black female CEO of a Fortune 500 company. While she no longer leads Xerox, Burns now sits on the boards of companies like Uber and serves as the chairwoman of telephone company VEON, which primarily serves developing countries.

Burns highlighted discrimination as a central problem in today’s world and encouraged the MSB graduates to work toward building a more equitable world.

Burns asserted that technology is the tool that the younger generations can use to reshape the world and address the problem of inequality and discrimination.

“Technology is the solution,” Burns said. “Now, you have [artificial intelligence], you have the internet, you have social media, you have the ability to change the world essentially from your seats, and I want to make sure you actually understand the power and take advantage of it.”

Burns said that the MSB graduates must assume the responsibility of pushing toward positive change because of their talent, as well as the skills and opportunities they received as students at Georgetown.

“You have something that very few people in the world will ever be able to get, and that’s a college education — fewer, even, a college education from a university like this,” Burns said. “So, unfortunately, you’re talented; unfortunately, you’re getting a Georgetown degree because you’ve got to strap it on. You’re going to have to carry the world for a whole bunch of years as we go forwards.”

Warning the MSB graduates of the challenges ahead, Burns encouraged them to continue to work toward building a better world and society even though there will inevitably be setbacks.

“None of this stuff is going to be easy. It’s going to cost money and time and energy and lot of your emotions,” Burns said. “Doing good work and pushing society forward, creating a revolution can seem and feel impossible, but it is not. It isn’t easy, it’s not linear, it’s not inevitable, but you must continue.”

Burns said that the ability to overcome challenges can help enable young leaders to rise to achieve their goals.

“No matter what you pursue, there will be obstacles — big, small, devastating and inconsequential and everything in between — and the difference between you and the next guy will be how hard you are willing to persevere and to overcome,” Burns said.

Almeida echoed Burns’ call to action for the Class of 2018 to strive to make a positive difference in the world.

“The world needs you,” Almeida said. “If you look at factors like income, wealth, life expectancy and health across the world and through history, you realize this: We are probably not just the 1 percent. We are the 1 percent of the 1 percent, and so we have a duty to make a difference.”