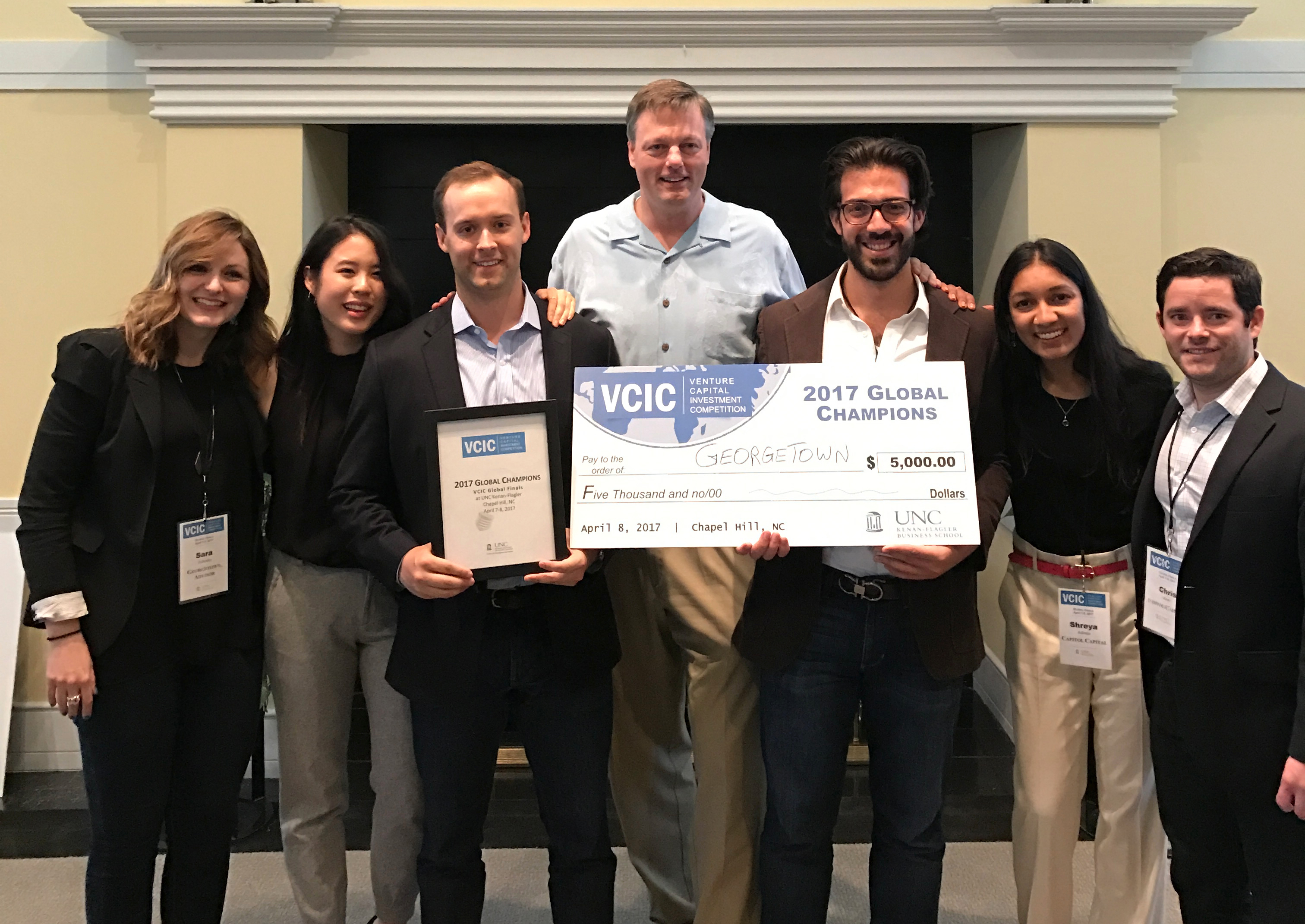 Georgetown’s Venture Capital Investment Competition team won first place at the VCIC Global Finals, a competition to convince judges to invest in a potential startup company, beating 12 teams from three continents in the championship hosted April 7 and 8 at the University of North Carolina at Chapel Hill.

The team upended 12 champions in their respective regions, defeating the second-place team from Brigham Young University in the final round after trailing behind them on the second day. The first place prize was $5,000.

The global round with all 12 teams took just over two days. The first round of judging occurred Thursday. At the end of Friday, Georgetown finished in second place with BYU taking first with a small lead.

The team had to analyze business plans and research assigned startups to determine which business would be the best investment for the judges. Competitors interviewed the entrepreneurs and developed a financial plan with the best startup to present to judges.

Half of the participants were eliminated by the beginning of the second day. With the remaining six moving on, Papas said the team knew the next session would be definitive.

“At this point, we knew this would be a make-or-break session,” Papas said. “Finally, we received the amazing news with our team taking first, BYU second, and the European Institute of Business Administration from Singapore taking third.”

Adiraju said the team’s preparation prepared them well for the competition. The process was a compilation of different approaches developed through prior experiences, according to Adiraju.

“No single mode of preparation was independently helpful,” Adiraju said. “It was actually the combination of technical practice in the form of due diligence of local startups in the DC area, acting out scenarios, spending time as a team discussing where our key strengths and weaknesses were and ultimately building our overall approach on this.”

Adiraju further emphasized the connection between team members as a crucial factor for their success.

“Being present but also aware of the mental state of each of your teammates is how we really connected with the entrepreneurs and judges, a key part of scoring in the competition” Adiraju said. “So, all in all, it was really the face time with the team members that took our training to a point where we really started to see a win in the future.”

Cottrell said the finals were significantly more intense than their previous competition, the Feb. 10 VCIC South Regional Finals. Cottrell said the main difference, other than the experience and drive of the other teams, was the judges — as former competitors, they knew which questions the teams found most challenging.

“The competition at UNC Chapel Hill was much more intense. Each of the teams had won their regional event so we were competing with the best teams in the world, and they’d really put their heart into the competition — many traveling internationally to come,” Cottrell said.

Cottrell said the competition’s judges were more difficult to persuade since many were former competitors.

“The competition has been going for 20 years, and there were a lot of judges who had done it as students, now work in venture capital, and returned to judge,” Cottrell said. “They had the experience to be much more critical than the regional judges and they were definitely much more challenging.”

With Adiraju, Papas and Ahern pursuing professional opportunities, Cottrell going into the Army Reserve and Cheng staying behind to finish her degree, the team is set to separate.

Ahern said despite their impending separation, all members looked forward to keeping in touch, with an eye toward forming business alliances down the stretch.

“Two members of the team have jobs lined up for after graduation, but we’ve been discussing possibilities for keeping the group together and investing together,” Ahern said. “We all really enjoyed working with each other and continually came to the right answer as a group.”