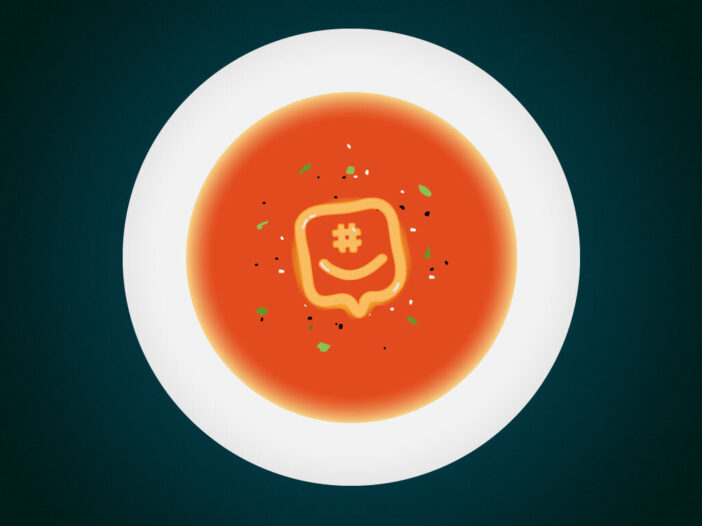 One night during the fall semester final season, a picture of over 100 sticks of Land-O-Lakes butter in a fridge appeared in a Georgetown University student GroupMe. The butter was up for grabs, and the owner, Jas Donohue-Oyzar (COL ’23), invited students to come to her Henle Village apartment to take as many sticks as they wanted.

Immediately, members of the “Free Food On Campus” GroupMe — a student group chat with over 2,800 members dedicated to distributing free food on the Hilltop — jumped at the opportunity.

Unsurprisingly, the now famous “butter incident” caused quite a stir in the group chat. Members questioned why anyone would have so much butter to get rid of and what circumstances had led to such a collection in the first place. They also asked when they could come pick up some sticks, Donohue-Oyzar said.

“People were coming, taking 16 sticks for one person,” Donohue-Oyzar told The Hoya. “It was nice. We met people. Now I say hi to more people when I walk by them. I gave butter to everyone.”

Donohue-Oyzar’s roommate had probably left the butter in the fridge as a prank, she told The Hoya. But the instant and lively GroupMe response showed that the campus community was more than willing to help out in situations like these — in this case, for the novelty, but also for the free dairy product.

The butter incident is funny, but the existence of the GroupMe — typically characterized by images and descriptions of overflowing fridges, leftovers from catered events and miscellaneous items that students were giving away — is also a symptom of a larger campus issue: food insecurity.

In addition to students offering extra personal food to others, campus organizations combating food insecurity have used the GroupMe as a way to further their goals, and it has even become a site of civil discourse as students organize around issues of food insecurity and controversial meal plan requirements.

Since its establishment in August 2019, the “Free Food On Campus” GroupMe has gathered close to 3,000 members. They range from students looking for a free bag of chips, to students experiencing food insecurity who need access to inexpensive or free nutritious meals, to those with leftovers they hope to distribute.

Other members, including from campus organizations, focus on combating food insecurity by advertising free food opportunities to the channel.

Founded by Margaux Ochoa (SFS ’22), the chat began as a handful of students posting about free food opportunities on campus to diminish food waste, Ochoa said.

“I really just wanted to find a way for students to be able to connect and be there for each other in community. I was very bothered by the amount of food that was kind of going to waste on campus,” Ochoa said in an interview with The Hoya. “So I wanted to try to do something small that I thought might be able to combat that type of food waste.”

The group chat has since grown into a constant conversation between thousands of students, usually discussing free food but also sometimes debating various on-campus issues and even making jokes, which can be frustrating because that distracts from the GroupMe’s original goal, according to Ochoa.

“I don’t have time to babysit anyone,” Ochoa said. “I just expect if you’re in the chat, just follow all the rules.”

Since “Free Food on Campus” was founded over two-and-a-half years ago, students have increasingly used the GroupMe to share information about Students Advancing Food Equity (SAFE) and the Hoya Hub, an on-campus food pantry, two organizations dedicated to fighting food insecurity in an effort to reach more food insecure students.

The large number of students in the GroupMe gives visibility to groups like SAFE, which conducts food rescues to bring donated food from local restaurants to campus. That enhanced visibility allows them to broaden the distribution of their resources and reduce food waste, according to Nicholas Hwang (COL ’23), food rescue coordinator for SAFE.

“I find the group chat has two distinct purposes. One is eliminating food waste. Georgetown is a college, there’s a lot of events going on, and sometimes people just have extra food,” Hwang said. “The second one is more so a more recent one where most of it is connected with the Hoya Hub, where there’s technically free food.”

But for most of the GroupMe’s members, combating food insecurity does not appear to be the chat’s main goal, according to Bella Fassett (SFS ’24), a member of the GroupMe.

“I would say the outcome — the primary effect — is not that it alleviates food insecurity. It is that it just provides an extra treat to people occasionally, is what it seems, is my perception,” Fassett said.

While the GroupMe has positive implications for the community, Fassett is concerned that some members have lost sight of the chat’s primary goal of serving students experiencing food insecurity.

“Lately SAFE has been putting their pictures of when they do a rescue in the free food chat,” Fassett said. “So that has then been an issue of people perceiving that as free food in the sense of free food without qualifications.”

Advertising the Hoya Hub and food rescues on the GroupMe runs the risk of SAFE’s rescued food reaching people who do not actually need it, ​​according to Abigail Orbe (COL ’23), SAFE president.

“The free food group chat is kind of like a free-for-all, if everybody just likes to go and takes everything, and we want to make sure that, first and foremost, it’s people who need it are able to do it first,” Orbe said in an interview with The Hoya.

While both SAFE and the Hoya Hub aim to provide food to Georgetown students, the organizations are separate entities, and administrative barriers can make it difficult for the two to interact in meaningful ways, according to Orbe.

SAFE is a student group under the umbrella of the Center for Social Justice (CSJ), while Hoya Hub operates under the Division of Student Affairs and receives funds through donations rather than student activity fees.

SAFE faces difficulty coordinating with Hoya Hub and other campus organizations, and the GroupMe has helped with cohesion, according to Hwang.

“The only thing that’s tying us together, that keeps this partnership with the Hub alive is us — the students, the managers, and people at SAFE. We’re the ones facilitating everything,” Orbe said. “There isn’t an administrative system that’s making sure that we’re coordinating.”

In addition to organizations using the channel for distribution, the “Free Food” GroupMe has also been a place for discussions and complaints about the university’s meal plan requirement, in light of the university’s decision to require all on-campus students to enroll in a meal plan this year.

The policy also requires first-years and sophomores to purchase the more expensive All Access 7 Plan, which allows for unlimited meal swipes at Leo’s at an annual cost of $6,520.

Following the announcement of the meal plan requirement for the 2021-22 academic year, students demanded a more affordable option, as well as exemptions for all on-campus juniors and seniors, who often have access to kitchens. The requirement, however, remained in effect.

The limited dining hours for Leo J. O’Donovan Dining Hall and other dining options that use meal swipes can be a source of food insecurity among students, according to Fassett.

“If you don’t eat before 10 p.m., you’re out of luck. You have to buy your own dinner, off campus, or from Vittles or Snaxa, which costs money,” Fassett said. “If you can’t afford to do that, then you eat air for dinner.”

While the Table at Leo’s, which serves all-you-can-eat buffet style meals, closes at 8 p.m. other dining options around campus are open until 10 p.m. for most weekdays.

The university decides the dining hours based on the needs of students, according to a university spokesperson.

“The hours of on-campus dining locations are selected to best meet the needs of the campus community based on utilization rates,” the spokesperson wrote in an email to The Hoya.

For students with dietary restrictions or time restraints, finding nutritious food at the dining hall can be difficult, according to Willow Volkert (COL ’25), who is vegan and works two jobs during the school year. Volkert decided to apply for a meal plan exemption, but the university denied her request, she told The Hoya.

The university’s lack of sufficient alternative dietary options paired with its meal plan requirement place financial burdens on students, according to Volkert.

“You’re saying, in the name of food security, I’m gonna have to pay for food I can’t eat and then have to go pay for food off campus?” Volkert said in an interview with The Hoya.

Students can submit a meal plan exemption or modification request after completing a mandatory meeting with Georgetown Dining Services’ registered dietician. The university also offers specialized menus and, in some cases, housing accommodations for students who have food allergies, experience medical conditions that cause dietary concerns, or observe religious diets.

The meal plan requirement was established to ensure that all students have access to consistent meals, according to a university spokesperson.

“To support and promote a healthy living and learning community where all students thrive, we offer a number of nutritious, flexible and affordable meal plan options for students on campus,” the spokesperson wrote.

To bridge this distance between the efforts of the administration and the concerns of students, Volkert has chosen a new avenue: advocacy, with support from the “Free Food On Campus” chat.

“I feel like protesting is the most effective way of getting their attention and getting the attention of people nearby,” Volkert said. “Stirring the pot, basically so that Georgetown has to do something about it, because it’s affecting their reputation.”

Volkert posted a call for action in the “Free Food On Campus” GroupMe on Feb. 13, and received 30 likes on her message in the span of four days. As of Feb. 22, 76 users have liked the message. According to Volkert, 20 people sent her their email addresses, saying that they would like to be involved in her campaign.

“I’m sure you all know that Georgetown has mandatory meal plans for all underclassmen, and justify it in the name of food security,” Volkert wrote in the Feb. 13 message. “This is obviously very frustrating for everyone. The school isn’t going to listen to people’s individual complaints, but if we organize and tell Georgetown that we want the option to have a less intense meal plan, they hopefully will listen to student interests.”

Volkert said she hopes to amend the mandatory underclassman meal plan to only include 14 meal swipes at Leo’s dining hall, rather than the current unlimited meal swipes, which would reduce the price by almost $300, as well as decrease the prices of all current mandatory meal plans.

In the coming weeks, Volkert plans to meet with other students who share her concerns and frustrations, and organize advocacy against the meal plan requirement.

Moving forward, Ochoa, the GroupMe’s founder, said she hopes that the channel will continue to address important issues of food insecurity on campus, helping students at an individual level while also providing a positive environment for all of the group chat’s members.

This article was updated March 1 to correct SAFE’s status as a university-funded club and clarify the nature of SAFE’s food rescues.