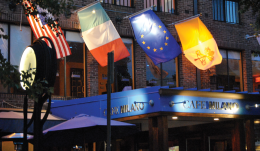 The Iranians who allegedly plotted to kill the Saudi ambassador to the United States were aware that their plan to bomb a D.C. restaurant could cause mass casualties.

Their response: “If the hundred go with him, [expletive] ‘em.”

After the foiled plot was announced, rumors spread that the likely target was high-end restaurant Cafe Milano — located just seven blocks from the front gates on Prospect Street near Wisconsin Avenue.

Two men, one an Iranian-born U.S. citizen and the second reportedly associated with the Iranian Revolutionary Guard, were accused of plotting the assassination of Saudi ambassador Adel al-Jubeir (GRD ’84). This summer, the pair approached a man they thought was a Mexican drug cartel associate, but who was, in fact, an undercover U.S. informant. The Iranian-American was arrested Sept. 29 and plans to plead not guilty to the charges.

At the time of the arrest, the assassins had allegedly finalized their plans to use a C-4 explosive to bomb a restaurant that the ambassador was known to frequent twice a week, according to records taken by the informant. U.S. authorities have also said that the Israeli embassy could have been a secondary target.

An assassin was quoted as saying that collateral damage extending to roughly 150 people in the surrounding area would be “no big deal.”

For some Georgetown students, the likely proximity of the planned attack changes their perspective on safety in D.C.

“It’s almost unbelievable,” said Tim Devita (COL ’14). “We don’t really realize that we are in the U.S. capital, and we’re reminded that it is a high security risk to live here.”

Cafe Milano is well-known as a hotspot for Washington insiders. Multiple reports have suggested that it was the target, although the restaurant is never explicitly mentioned in legal documents. A manager at Cafe Milano said he did not know if the restaurant was targeted.

“It’s a little scary,” said Krista Engemann (COL ’13) upon hearing the news. She remarked that she felt reminded of what it was like to live in New York City during the 9/11 attacks.

A worker at Tuscany Cafe, a pizzeria on the same block as Cafe Milano, expressed shock upon hearing how close the explosion could have been to his workplace. The employee, who asked not to be identified, said that such news in Washington is more frightening than the persistent threat of danger he once experienced living through a foreign civil war.

John Collins (COL ’14) said he has a different perspective from having grown up in New York City and experiencing terrorist threats.

“You got to live life, right?” Collins said. “I’m pretty confident in our homeland security, and there are plots all the time.”