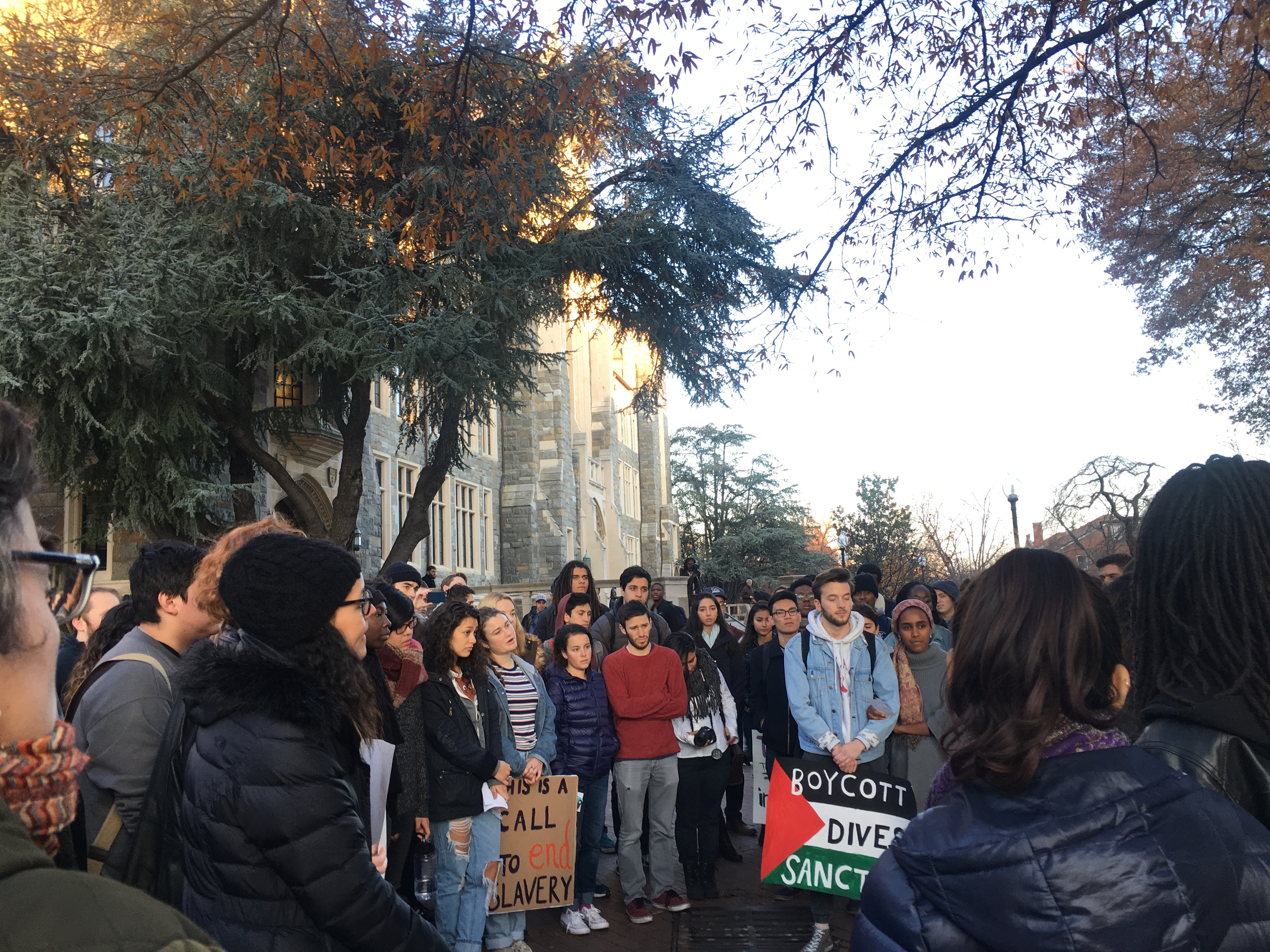 Georgetown University Forming a Radically Ethical Endowment Coalition, a student-organized group seeking  transparency in Georgetown’s endowment, demanded the university to divest from private prisons and companies that contribute to the “occupation of Palestine,” during a launch rally in Red Square Dec. 7.

Chris Morris (COL ’19), an organizer for GU F.R.E.E, said such investments contribute to human rights abuses both in the United States and abroad.

“We came together today to hold the university accountable for its role in perpetuating state violence with a specific goal of publicizing Georgetown’s holdings and companies which consistently and knowingly endanger human life,” Morris said.

According to a press release released by the campaign, students from GU F.R.E.E submitted a proposal to the Committee on Investment and Social Responsibility Oct. 12 requesting transparency on the university’s investments but have yet to receive a reply.

The coalition, which is endorsed by 17 students groups,  has also sent a letter to University President John J. DeGioia requesting confirmation that the university’s endowment is not invested in any companies that support private prisons or the “occupation of Palestine.” The letter demands a response by Jan. 13.

While members of GU F.R.E.E met with Chief Investment Officer Michael Barry and Associate Vice President of Operations Christina Roberts, Morris said the administration has not acted upon their request that Georgetown divest from companies perpetuating state violence.

“We find it hypocritical and disingenuous for Georgetown, a Jesuit academic institution, to profit off of the oppression,” Morris said. “Does cura personalis only apply when it doesn’t impact our investment returns? Is faith and justice limited by supply and demand?”

The coalition is endorsed by groups representing underrepresented populations and groups that advocate Palestinian independence from Israel, including the Georgetown chapter of the NAACP and GU Students for Justice in Palestine.

The Jewish Student Alliance, J Street U Georgetown and the Georgetown Israel Alliance are not members of the coalition.

Hoyas Against Hate did not respond to a request for comment as of 11:30 p.m.

GU F.R.E.E. said that while the group is planning to expand the coalition, it does not plan to invite J Street U Georgetown, which advocates for a two-state solution between Israel and Palestine. The national J Street organization does not support the Boycott, Divestment, Sanction movement because the BDS movement does not support a two-state solution, according to the J Street website.

“We are still in the process of building our coalition and will be meeting with more groups as the campaign progresses,” the group wrote in an email to The Hoya. “We have not contacted nor do we intend to contact J Street U as their national charter explicitly condemn the BDS call from Palestinian civil society, which our call for divestment from companies that empower the Israeli occupation serve as a direct a response to.”

The initiative comes after the board voted in June 2015 to divest from all coal companies.

GUFF member Grady Willard (SFS ’18) said the group has been pursuing a socially responsible investment policy beyond divestment from fossil fuels in the last year and a half.

Willard said an official statement of divestment from the university would carry weight regardless of whether Georgetown is actually investing in these controversial areas.

“Even if Georgetown is not invested in a particular issue, there is some merit to the university saying they’re divesting from that issue because there’s something about Georgetown saying we don’t condone this,” Willard said.

One of the campaign organizers Eman Abdelfadeel (COL ‘17) said the GU F.R.E.E campaign seeks to provide justice to those who deserve it.

“We want to affirm the agency of the Palestinian people. They, like all people, are entitled to tangible justice,” Abdelfadeel said. “We recognize that peace is impossible without justice, so we proudly endorse the 2005 call of Boycott Divestment Sanctions as a tool to hold Israel accountable for its crimes.”

MacKenzie Foy (COL ’19), who is an organizer for GU F.R.E.E., said Georgetown’s investment in private prisons is akin to continuing the legacy of slavery.

“There’s no legacy of slavery more present in American life than prisons. The university fails to end its complicity in practices which are antithetical to our foundational Jesuit principles,” Foy said. “While our president may assert our university’s commitment to justice, there have only been halfhearted efforts to follow through on promises of reconciliation. Reconciliation looks like divestment.”

Morris said this campaign is a way for students to fight back against state violence.