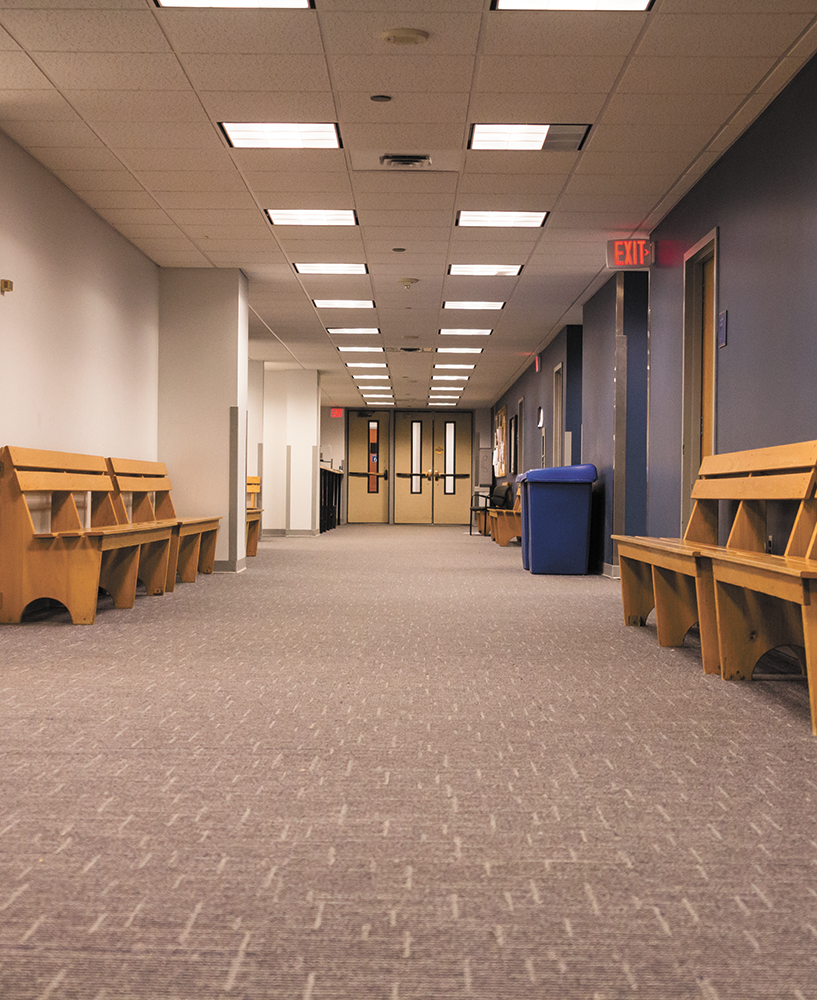 After the School of Foreign Service Academic Council rallied support through Georgetown Roundtables, an online forum where Georgetown students can pitch their ideas, renovation plans regarding the Intercultural Center are underway. Renovations will include the addition of student study space similar to that found in Regents Hall and the Rafik B. Hariri Building.

The SFSAC spearheaded these changes, believing the ICC Galleria to be a poorly designed space.
“We call the ICC our home, but no one studies there. It also looks really bad for Georgetown in general and the SFS tours,” SFSAC President Kyle Zhu (SFS ’14) said. “We say, ‘This building is the building for the SFS,’ and then you see students sitting on the ground because there are no seating spaces. It’s just unsavory to look at.”

The SFS Academic Council garnered support through its IdeaScale platform, which earned over 400 votes and strengthened the council’s proposal to the Office of the Provost.

“It’s great for us because we were able to put numbers to interest,” Zhu said.

The office had considered updating the ICC before the proposal’s inception, but it had not proceeded with this planning. After the SFSAC proposed renovating the ICC Galleria, the office expanded the idea to include adding study-friendly furniture to the elevator areas on the first and second floors.

“They’ve talked to the furniture company that did Regents and MSB and are going to contract with them to put those types of furniture in the first two floors,” SFSAC Vice President Megan Murday (SFS ’15) said.

Despite this collaboration, the project suffers from technical setbacks: Updating the building’s electricity and lighting will prove difficult. The ceiling is a skylight, which complicates hanging lights, and the concrete and brick floor needs to be taken apart in order to facilitate the addition of outlets.

“In order to fix some of the issues in the ICC like lighting, soundproofing, acoustics, electrical work, that actually requires a look at the entirety of the ICC and seeing how you would change everything,” Zhu said.

Procuring the desired furniture is also an issue since some fixtures include outlets.
“If they want to get tables that are integrated with the electrical system, so tables have outlets, that also requires looking at it. It’s all related, it’s all intertwined. So it’s kind of like everything is dependent on each other. So you need all your ducks in a row before you can really have a conversation about it,” Zhu said.

An engineering firm is currently exploring other alternatives, but the renovations remain stalled until these problems are resolved.

Vice President for Planning and Facilities Management Robin Morey has confirmed that his department will support the changes.

“We provide the planning, design and construction expertise for our clients. We integrate the clients’ programmatic requirements and, to the extent possible, ensure we meet the project goals, objectives and budget,” Morey wrote in an email.

Planning and Facilities Management will ensure that all codes are followed in order to avoid technical issues.

“Effective programming and planning and design can help mitigate technical challenges during construction activities while ensuring we meet our client’s requirements as well as building code compliance,” Morey wrote.

The first two floors of the ICC are more likely to undergo timely renovations because they do not suffer from the same structural complications as the upper floors.

The complexity of these structural issues precludes the SFS Academic Council from offering a time estimate for the project.

“[The Provost’s Office] doesn’t want us to talk about timeline yet, so out of respect to them we won’t. But the engineering firm is doing the study this semester,” Murday said.

However, the council hopes the new furniture will be moved into the first and second floors by the end of the semester.

According to Zhu, some professors have already raised opposition to the project because of potential noise problems. However, the proposal might include soundproofing offices in order to eliminate this problem.

“This issue of noise because professors who are faculty members who have offices in the space are already complaining about loud noises, and they are afraid that if you increase the volume or usability of the space, that that now is going to get out of control so how do we soundproof their offices or make it so that it’s not a bothersome thing?” Zhu said.

The changes will allow for more student traffic and might also affect More Uncommon Grounds, which is located in the ICC Galleria. The storefront might extend its hours to accommodate student traffic, but the preliminary nature of the plan precludes an imminent decision.

“We would absolutely be open to adjusting our schedule in response to student demand if traffic to the ICC increases, but we don’t need to make any firm decisions on this until the project is further along,” MUG Director and future Corp CEO Sam Rodman (MSB ’15) wrote in an email.

The ultimate goal of the project remains to transform the ICC into a space where student collaboration is possible.

“We see the ICC as a building that houses a lot of these classrooms, but it is a space where students go to class and then leave,” Murday said.

Kristen Sullivan (SFS ’17) expressed support for the project, which also aims to solidify a strong SFS identity through the establishment of a community location.

“I almost feel like each school has its own building. So SFS has ICC, the Nursing School has St. Mary’s or Reiss and then MSB has Hariri, so I feel like SFS students can identify the most with the ICC,” Sullivan said.

However, other students expressed doubts about the effectiveness of this project.

“You can’t add furniture and call something a study area,” John Harrison (COL ’16) said. “More student space is never a bad idea in theory, but ICC just doesn’t have the room to be an actual student space.”

There were also concerns about how long it would take to finish the serious changes like digging into the ICC concrete in order to update the lighting and electricity.

“I don’t really mind as long as it doesn’t exceed the four years, because then just from a selfish perspective, if it’s still under construction when I’m a senior and I just dealt with all the construction it’d be a little annoying,” Kathleen Daly (COL ’17) said.