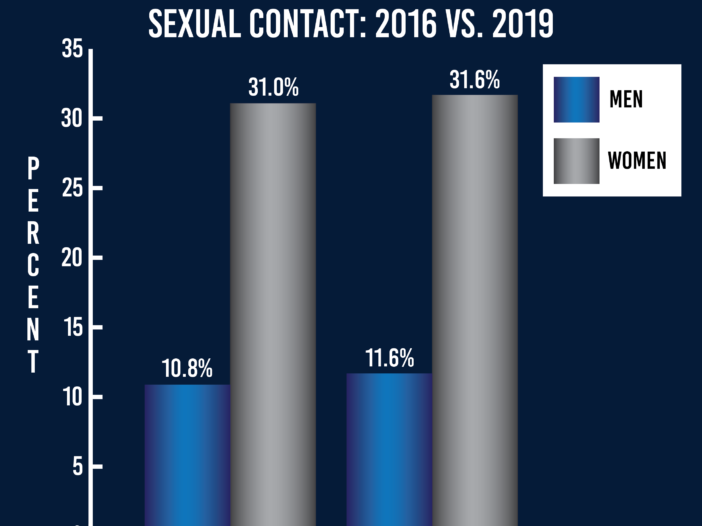 While sexual assault rates at Georgetown University have not changed significantly, students’ awareness of sexual assault resources has increased in recent years, according to the results of the 2019 Campus Climate Survey on Sexual Assault and Misconduct released Oct. 15.

The national survey was conducted across 33 universities by the Association of American Universities, which designed the survey to assess the frequency of campus sexual assault and misconduct in a way that allows for data sharing across universities.

Among undergraduate students, 31.6% of women and 11.6% of men reported experiencing nonconsensual sexual contact since entering college, according to the 2019 survey. These rates are not significantly different from the 2016 rates of 31.0% for women and 10.8% for men.

Georgetown reported higher rates of sexual assault compared to other participating universities. The AAU reported that on average, 25.9% of undergraduate women and 6.8% of men have experienced nonconsensual sexual contact while in college.

Georgetown students also reported lower trust compared to the AAU average in the institutions that are reponsible for the handling of sexual assault reporting compared to students at other universities, according to the survey. When asked if they believe that campus officials would conduct a fair investigation in response to a report of sexual assault or other misconduct, 44.0% of students indicated that it is very or extremely likely that the investigation would be fair compared to 50.5% for the AAU average.

The university aims to increase transparency and work more closely with students in the administration’s discussion of sexual assault and misconduct issues, Title IX Coordinator Samantha Berner said at a press conference on the survey results Oct. 15.

“We are constantly trying to engage more with students, so going to students in the spaces that they feel most comfortable with, and making meaningful relationships and establishing trust in that way,” Berner said. “Trust may not be built in this broad scale, but will also include more personal interactions and conversations.”

Since the first survey, students have become more aware of the resources available on Georgetown’s campus, including Health Education Services, the Title IX Office and the Academic Resource Center, according to this year’s survey results.

The university posed a similar question in the 2016 survey, in which 77.1% of students indicated they did nothing when they witnessed a drunk person heading for a sexual encounter.

Following the first survey, the university made bystander intervention training, known as “Bringing in the Bystander,” a mandatory part of orientation for first-year and transfer students.

The newly mandated training may have a connection to the higher rates of students willing to engage in intervene in situations in which they perceived the possibility of sexual assault, according to Berner.

“We’re always striving to find better ways to engage with our community and address these issues on our campus.” Berner said. “I think looking at the climate survey results, to see a vast improvement in knowledge of how to intervene and students feeling like they’re comfortable enough to intervene, that speaks a lot to the training.”

HES, which coordinates bystander trainings, hopes to further collaborate with students on initiatives to combat sexual misconduct on campus, according to interpersonal violence training and educational specialist Erin Hill.

“Bringing comprehensive bystander intervention training to this campus has always been a student driven initiative, and we are so pleased to see this education having a positive impact in our community,” Hill wrote in an email to The Hoya. “It’s encouraging to see students feeling more comfortable intervening for others, and we look forward to creating even more educational opportunities for students to expand these skills.”

The survey results are divided by several demographics, including race and sexual orientation. The results show that undergraduate transgender, genderqueer and nonbinary students experience both instances of sexual assault and harassment at similar rates to undergraduate women.

“The survey findings underscore that, as a community, we have significant work to do in order to achieve a campus environment free from sexual misconduct,” DeGioia wrote in an email to the community. “Our work will address all of our students, and we will have a particular focus on addressing the experiences of students of color; transgender, genderqueer or nonbinary (TGQN) students; and students with disabilities.”

The university has planned several listening sessions because of the survey results, which will be hosted by faculty, staff members and administrative leaders from each of the campuses. The first listening session will be held Oct. 21.

The university’s ultimate goal for the campus community is to create a long-lasting, positive culture change, according to Hill.

“All of us must remain diligent in not only educating ourselves on how to support and uplift others, but also engage in critical self-reflection of how we ourselves can be better community members,” Hill wrote.