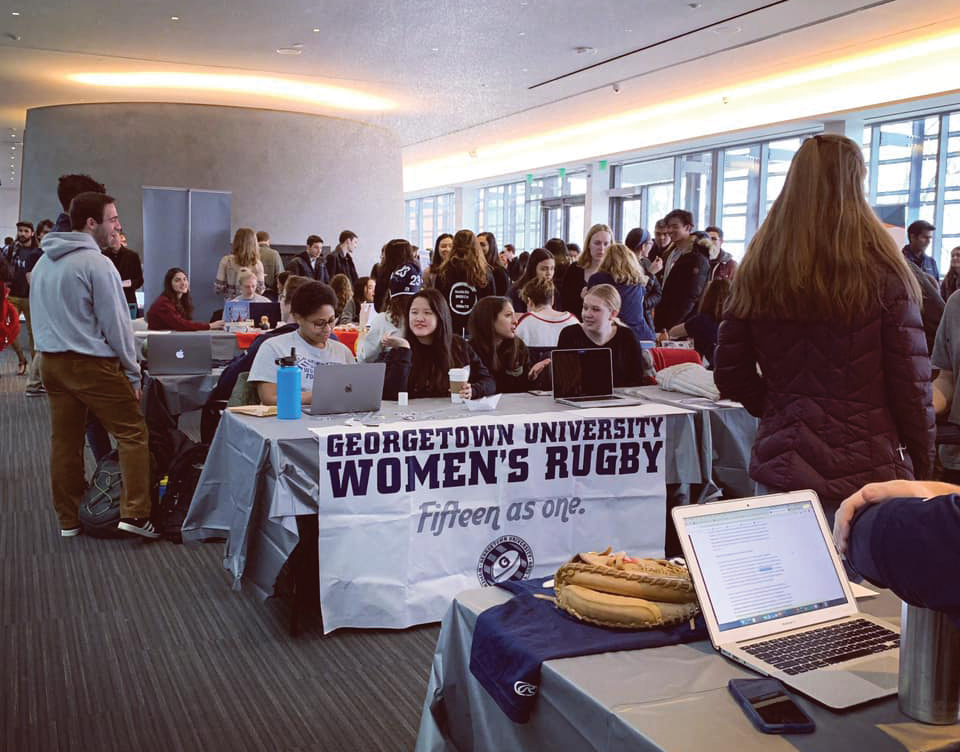 When Georgetown students introduce themselves on campus, a laundry list of identifiers ensues: name, school, year, major, maybe hometown and then extracurriculars. At Georgetown, club involvement can determine friendships, social involvement and perception on campus.

This emphasis on involvement in often application-based, seemingly exclusive extracurriculars has led to the emergence of the phrase “club culture,” a term that has become a defining factor of social life at Georgetown that suggests clubs’ perception and the power they have in framing students’ daily lives.

Student clubs and organizations at Georgetown have always been an integral part of their experience at university. Among the oldest debating societies in the nation, the Philodemic Society was founded in 1830 by Fr. James A. Ryder, S.J., and notable alumni include former Supreme Court Justice Antonin Scalia (CAS ’57).

Mask and Bauble Dramatic Society, founded in 1852, is the oldest student-run collegiate theater troupe. Eleanor Roosevelt was a patron of the club in 1936, and alumni include Bradley Cooper (COL ’97) and actor John Barrymore before he was expelled in 1897.

A 2012 student life report found that 92.9 percent of the student body was involved with at least one of over 250 organizations, demonstrating how prevalent club culture is at Georgetown.

Before enrolling in Georgetown, prospective students learn about the university’s many club offerings. Over 200 extracurricular groups exist at Georgetown, and admissions tours and presentations emphasize the wealth of on-campus involvement opportunities, according to Charlotte Kelly (COL ’20), a tour guide for the Blue and Gray Tour Guide Society. Even though the presence of clubs is emphasized, the pressure to join them is less clear.

“I would say that most prospective students are not aware of the extent to which club culture is a dominating force in the typical Georgetown student’s social life,” Kelly said.

Given that Georgetown does not recognize most Greek life, these extracurriculars seem to gain more importance, which Kelly tries to be honest about during her tours without blowing their exclusivity out of proportion.

“Most people do seem very compelled by the notion of club culture determining some of their social life in place of the typical Greek system,” Kelly said.

Despite this focus in campus tours, many students arrive on campus unaware of the pervasiveness and importance of club participation that creates a negative pressure for students, according to Cira Mancuso (SFS ’21).

“I knew about club culture in the traditional sense, not the Georgetown sense,” Mancuso said. “But absolutely no one actually told me the reality of Georgetown club culture.”

Students are confronted with the magnitude of Georgetown club offerings early each semester during the Council of Advisory Boards Fair. At CAB Fair, students can learn about different extracurriculars and can sign up to hear more from those clubs. The event can also bombard some students, according to Mancuso.

“It was so overwhelming, too crowded and just an overall sensory overload,” Mancuso said.

“Once I saw the applications, I couldn’t believe it. It felt like I had just finished applying to college and now I had to write multiple essays about why I wanted to join a club?” Rivero wrote in an email to The Hoya.

Though CAB Fair can be intimidating, the real stress of “club culture” for some arrives when club exclusivity crystallizes.

The preprofessional atmosphere surrounding clubs like Students of Georgetown, Inc., commonly known as The Corp, or the Georgetown University Alumni and Student Federal Credit Union creates high levels of student interest in their acceptance process and social benefits. While GUASFCU, Blue and Gray and The Corp no longer publish their acceptance rates, GUASFCU only accepted 7.6 percent of 290 applicants and Blue and Gray only accepted 10.2 percents of 313 applicants in the fall of 2016.

Some clubs have ceased to publicize their acceptance rates, which comes out of an effort to avoid adding to the overvaluing of exclusivity, according to former Corp CEO Alex Gong (SFS ’20) in a November 2018 Hoya article (“Clubs Respond to Criticisms of Selectivity,” The Hoya, Nov. 2, 2018, A4). The Corp has declined to release its statistics since 2015, when its acceptance rate was reported as 18 percent.

“A consensus among the club leadership community in recent years is that by releasing acceptance numbers or interview numbers, you perpetuate the idea that exclusive clubs are the ones you want to get into and that it is some kind of accomplishment if you get an interview or got in,” Gong said.

Tight-knit groups, however, can also contribute to the sense of camaraderie, according to Abigail Adams, a student at the University of Edinburgh who is currently on a yearlong exchange at Georgetown.

“Coming to Georgetown, I definitely saw the collective sense of purpose inherent in club culture as a positive,” Adams said. “Basically everybody on this campus seems to be engaged with something extracurricular in some way, and those spaces are valuable to students as their social ‘homes’ while also serving a wider mission, whether that’s professional development or journalism or advocacy.”

Adams is currently involved in Mock Trial, Delta Phi Epsilon Professional Foreign Service Sorority, Georgetown Journal of International Affairs and the Caravel, and she plans to get more involved with the Hoya Hub. A “club culture” does not exist at her home university, but her experience with Georgetown’s extracurricular scene has been so positive that she is currently applying to transfer permanently.

“In this way, ‘club culture’ was really helpful —  it provided a way for me to meet like-minded people,” Adams said.

While club culture can have unintended consequences, joining clubs can still be beneficial for the social life of students.

Mancuso participated in clubs her first year at Georgetown, but quit them to pursue internship opportunities. Joining them at all, though, still gave her a friend group that she would not have been found otherwise.

“I’m lucky I did, because I don’t think I would have found friends otherwise. It’s bizarre,” Mancuso said.

Clubs satisfy humans’ need to find themselves through other people by breaking down a large population like a university into more manageable groups, according to Fathali Moghaddam, the director of the Interdisciplinary Program in Cognitive Science and a professor in Georgetown’s department of psychology.

“Humans have deep-rooted identity needs that can be satisfied better through participation in small groups involving face-to-face interaction and personal familiarity with other members than large institutions such as Georgetown University,” Moghaddam said. “We can’t possibly know all the members of the university, but we can get to know other club members. The identity that develops through small group processes is very satisfying.”

Committing to too many clubs, though, can have negative effects on students’ academic performance, according to Moghaddam.

“The impact on some students is detrimental, because they lose perspective and invest far too much time in clubs and organizations and too little time on academic activities,” Moghaddam said.

While clubs can help students connect with people with similar interests, they can also keep people from interacting with a wide range of friends, according to Rivero.

“On a very superficial level, I think the intersection between social life and clubs makes a lot of sense,” Rivero wrote. “On the other hand, I think it’s unfortunate. Many of the clubs on campus lack diversity; most students find themselves living in bubbles, having similar conversations all day.”

Clubs limit people’s social lives if they choose not to join them,  according to Kian Blewett (SFS ’22).

“The clubs at Georgetown are ridiculously exclusive, and being forced to structure your social life within that framework is not good for anyone,” Blewett said. “Those who get left out are left even more isolated and those who get in are stuck in echo chambers.”

When reflecting on the downsides of club culture, students are quick to blame the university administration, calling on Georgetown to intervene to change campus culture. Yet the culture seems to come from the high concentration of motivated students on campus.

The administration does not play the same role for all organizations such as clubs, student businesses or other student-run programs, according to Erika Cohen-Derr, the assistant vice president for student affairs.

“Those are all categorically different in some important ways, but to a lot of students, they’re not,” Cohen-Derr said.

Clubs and other organizations are student-driven and organized around a common interest and mission. They receive university funding and therefore must abide by certain policies — including having some form of open membership.

The regulatory power of the administration lies largely with the Center for Student Engagement and Student Activities, a program under the Division of Student Affairs that regulates university policy regarding clubs on campus.

The clubs traditionally perceived as the most exclusive that are now trying to address this issue often have strict admissions policies or for-profit structures like The Corp and GUASFCU — as such, they fall outside the realm of the CSE’s regulation. They do not receive university funding, they pay rent for spaces on campus and they have closed application review processes. Therefore, changing “club culture” requires student leaders in those groups to change the way they advertise and accept applicants, according to Cohen-Derr.

“They need to be challenging the barriers that prevent students from feeling a sense of belonging,” Cohen-Derr said in an interview with The Hoya.

The director of the CSE, Aysha Dos, declined to comment.

Clubs can improve the perceived exclusivity culture by publishing club acceptance statistics like some have done, more clearly communicating admissions criteria to applicants and implementing open membership, according to Cohen-Derr.

CAB has even started hosting a second CAB Fair just for clubs without an application process.

Despite her emphasis on open membership options, Cohen-Derr acknowledged the importance of application processes in certain clubs. Selectivity makes sense for clubs with capacity restrictions or skill requirements, but she encourages groups with application-only structures to adopt a more tiered level of participation.

Student perception of club exclusivity demonstrates a varied interpretation of the value of Georgetown’s club culture, according to Blewett.

“I actually think the narrative surrounding club culture is the biggest thing perpetuating it,” Blewett said.