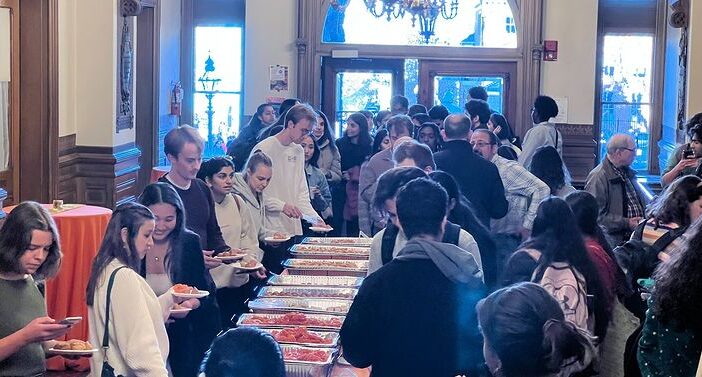 Georgetown University Campus Ministry coordinated a Chaplain’s Tea centered around a Sikh holiday in an effort to further recognize Sikh students at the university.

Campus Ministry organized a celebration of Gurpurab — a Sikh holiday celebrating the birth of the first Sikh guru and founder of Sikhism — at the Nov. 8 Chaplain’s Tea, a weekly event hosted by Campus Ministry offering free tea and snacks and the opportunity for students to speak with university chaplains and members of Campus Ministry. Campus Ministry’s Director for Dharmic Life, Dr. Brahmachari Sharan, spoke on the significance of Gurpurab, alongside members of the Sikh Student Association (SSA).

Keerat Singh (SFS ’22), one of the co-presidents of SSA, said the event was the first time a Chaplain’s Tea featured the Sikh faith during her time at Georgetown.

“I have been attending Chaplains tea since freshman year so it was really exciting to be finally having one centered around a Sikh holiday,” Singh wrote to The Hoya.

Chaplain’s Tea represents an important step for Georgetown to engage with the Sikh community at Georgetown, according to Singh.

“It’s important because we need to raise awareness about religions that aren’t taught in schools to both increase visibility of religions like Sikhism and to counter hate in the world,” Singh wrote.

Sharan said Campus Ministry has made changes in recent years in an aim to better reflect the backgrounds of Georgetown students, including the change of Hindu life into Dharmic life, which encompasses Buddhists, Hindus, Jains and Sikhs on Georgetown’s campus. Sharan said that he advocated for the change in order to represent a greater number of students from various faiths.

Sikh students lead Sunday Sangats, coordinating the singing of Shabads, and setting up a langer, or community kitchen, once a month when Campus Ministry organizes a space for Sikh students to gather and worship.

According to Sharan, Campus Ministry has seen an impressive degree of coordination and self-sufficiency on part of the SSA and other Sikh students on campus.

“Because they see that the students themselves manage the Shabads, they manage the entire event, and they’ve created a wonderful community for people — because of that, there’s just a really high estimation of the Sikh Student Association,” Sharan told The Hoya. “Because other traditions have actual chaplains on campus to help them, while these results are student led.”

Sharan said that this celebration of Gurpurab further reflects Campus Ministry’s commitment to providing space for Sikh students at Georgetown to honor their religion.

“Over time, Campus Ministry has been really impressed by how Sikh students gather, and how they do work together, not only for their own communities, but for all the communities,” Sharan said. “So when they did start to add themes to Chaplain’s Tea, they felt it was only natural to include one of the most cherished societies that they have at this school.”

Kelly Rankin, Campus Ministry’s communications and outreach coordinator, said that Campus Ministry decides the weekly themes for Chaplain’s Tea throughout the semester and takes into account many factors, including holidays and partner availability, to honor students’ diverse backgrounds.

“We host Chaplains’ Tea to highlight the diversity of our campus community,” Rankin wrote. “We like to feature partners as a means of promoting the important work happening at Georgetown to our faith communities and to broaden engagement in these informal gatherings.”

Singh said she hopes the university’s support for the Sikh community will continue, with the Gurpurab celebration representing a stepping stone for recognition on campus.

“Other important Sikh holidays include Vaisakhi, in April, and Bandi Chhor Divas, which happens around the same time as Diwali,” Singh wrote. “It would be great to have other celebrations supported by Campus Ministry in the same way that they are supporting Gurpurab.”