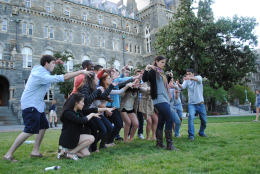 The Georgetown Phantoms is Georgetown’s oldest co-ed a cappella group.  Founded in 1988, the Phantoms began as a loosely-organized holiday caroling group, putting on spontaneous performances around campus and popping up like “Phantoms” (hence our name). Over the last 23 years, we have developed into a dynamic group of about 19 Hoyas, maintaining a yearly repertoire of 50 plus songs ranging from classical music to Top 40 hits.  The Phantoms have performed all across the Georgetown and greaterD.C. communities. We have also performed as the opening act for Chingy and the Black Eyed Peas on BBC Radio 1, as well as at venues including the State Department, the Smithsonian Museum of Natural History and the Kennedy Center. In 2010, the Phantoms competed for the first time in the International Competition for Collegiate A Cappella and won “Outstanding Soloist” in the quarter-final and semi-final rounds.

By far the most exciting time of year for the Phantoms is the annual D.C. A Cappella Festival, orDCAF, which is co-hosted by the GraceNotes. DCAF, now in its 20th year, took place these past two weekends in front of sold-out crowds in Gaston Hall.  The festival featured various Georgetown a cappella groups, as well as guest groups from around the country; this year, the Phantoms invited the Yale Whiffenpoofs (from NBC’s “The Sing-Off”) and the NYU N’Harmonics (a DCAF staple) to perform. The reach and reputation of DCAF continues to grow immensely each year.

The Phantoms are finishing production of our sixth CD, which will  be released by Christmas. In the meantime, the Phantoms look forward to continuing to sing for the Georgetown community and  extending our reach. Most recently, we have been invited to perform at the White House on Dec. 3 as part of the White House’s holiday festivities.

Spring auditions are quickly approaching, so if you’d like to audition, feel free to email us [email protected], find us at facebook.com/hoyasaxa, follow us @guphantoms or visit our website at georgetownphantoms.com.