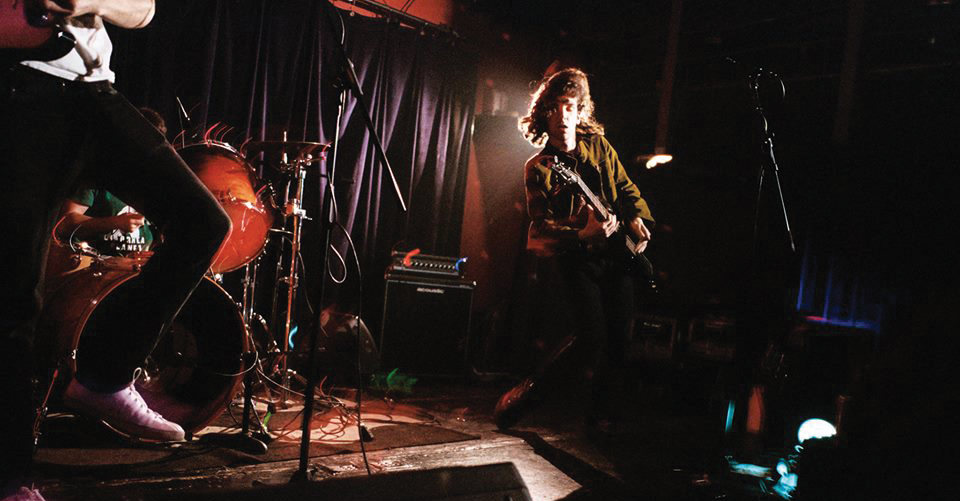 Rarely in an era where flawless stage presence seems to be the par excellence of live performance will a band forgo pyrotechnics and flashy outfits for flailing limbs and crunchy guitars. Although Car Seat Headrest unassumingly took the stage at the 9:30 Club on Sept. 19 outfitted like a high school garage band, its sound was far from juvenile. With a mix of ear-shattering guitars, vulnerable and poignant lyrics and an audience filled with electric energy, the atmosphere at the 9:30 Club crackled with the magnetism of sheer noise.

Car Seat Headrest began as the solo act of singer and guitar player Will Toledo in 2010. From humble beginnings recording in the back seat of his car, Toledo began to gain positive attention from LPs released on the independent music streaming site Bandcamp. In 2015 Toledo signed with Matador Records and released “Teens of Style” to critical acclaim. The solo project of the Leesburg, Virginia native soon grew into a bona fide rock band that eventually led to the 2018 re-release of Toledo’s earlier recordings in fully fleshed-out form as the album “Twin Fantasy.”

The Seattle-based band Naked Giants accompanied Car Seat Headrest on tour and matched its energy every step of the way. The smoky, lo-fi vibe of the 9:30 Club provided the perfect backdrop for what can most accurately be described as Naked Giants’ DIY psychedelic jam session. The band was made up of a simple power trio of bass, guitar and drums. Yet with careful layering and the musical prowess of guitarist Grant Mullen, the band produced enough sound to leave the audience dazed and confused — in the most positive way possible.

The turnaround between Naked Giants’ final track and Car Seat Headrest’s first was brief, allowing the audience’s energy to remain at fever pitch. Car Seat Headrest took the stage without fanfare or mystery, with the members of Naked Giants serving as part of Toledo’s backing band. Car Seat Headrest led into its first track via a cover of the Lou Reed song “Waves of Fear.” The cover elicited some confusion from the crowd — which was quickly resolved when the band launched into “Fill in the Blank,” a moshy power-rock track off its 2016 album “Teens of Denial.”

With no more than the introduction “we are Car Seat Headrest and we’re gonna play some songs,” the band jumped into the next track, “Bodys.” The track presents a matured version of teenage angst where carelessness is forfeited for the beginnings of self-consciousness and consequence rears its ugly head. Toledo pleadingly crooned on stage “Don’t you realize our bodies could fall apart at any second? / I’m terrified your body could fall apart at any second” while flailing his body with reckless abandon.

The theme of an Icarian fall after the height of teenage reckless abandon permeated the setlist Wednesday night, most notably with the performance of “(Joe Gets Kicked Out of School for Using) Drugs With Friends (But Says This Isn’t a Problem).” Toledo dedicated the song to the college students in the crowd before singing lyrics that would hit close to home for many college students.

Cruising at a deliberately lagging tempo, he sang, “Hangovers feel good when I know it’s the last one / Then I feel so good that I have another one.” Toledo delivered this line with a vocal intonation like he was experiencing not his first and certainly not his last hangover. The lyricism and drowsy nature of Toledo’s performance perfectly encapsulated the piquant feeling of teenage denial in the face of drug culture. Even more pointedly, Toledo juxtaposed the high expectations of drug use with their disappointing rewards by singing, “Filled with loathing and religious fervor / I laid on the floor of my friend’s bedroom for an hour / And tried not to piss my pants.” Toledo in this way managed to elegantly sum up the incredibly inelegant nature of being a “teen of denial” or “teen of style” conforming to what he acerbically calls “the modern style.”

After performing the relatively obscure “America (Never Been),” Car Seat Headrest switched to the crowd favorites “Drunk Drivers/Killer Whales” and “Destroyed by Hippie Powers.” The crowd began to mosh during these two infectiously driving songs. The easily sing-able chorus of “Drunk Drivers/Killer Whales” almost disguised the fact that the song is a poignant vignette of the internal debate whether to drive home after drinking. The song takes a humanizing approach to the pitiable state of would-be drunk drivers, conceding, “We are not a proud race / It’s not a race at all / We’re just trying / I’m only trying to get home.”

The concert ended with an encore featuring the 13-minute electrifying dirge “Beach Life-In-Death,” Toledo’s magnum opus of youthful ennui. With the crowd now in full mosh-mode, Toledo and company mixed crackling guitar licks with percussive anguish for a truly jolting finale. Rock may have been pronounced dead, but it seemed like it was resurrected on Wednesday night by Car Seat Headrest. By releasing vulnerability, fear, confusion and teenage angst through the tension of pure sound, Car Seat Headrest left the audience emotionally exhausted and musically astounded.