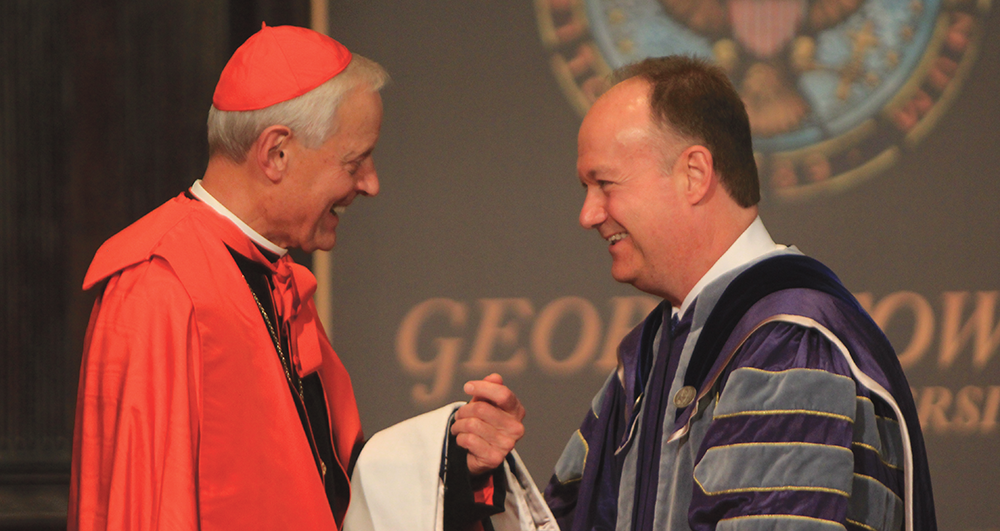 The event began with a processional of university leaders and a performance by the Georgetown University Concert Choir. Secretary of the University Edward M. Quinn (SFS ’73) then read from the University Charter, which turns 200 next March.

The official honorary degree was presented to Wuerl by board of directors Chair Paul Tagliabue (CAS ’62).

The degree was conferred by University President John J. DeGioia, who spoke about Wuerl’s dedication to the Catholic faith and service throughout his life.

“We come together today in Gaston Hall to recognize the contributions of an extraordinary leader, teacher  and man of faith,” DeGioia said. “It’s fitting that we gather here in the oldest Catholic and Jesuit university in the United States to honor the faith and service of Cardinal Wuerl.”

After Wuerl accepted the honorary degree, he gave a speech about the importance of God and teaching in the Catholic community.

“We were made in the image and likeness of God. … There is a God-given plan for every single human being,” Wuerl said. “Each one of us has the potential to make this the manifestation of God’s community and doesn’t this university exist as this church does to say to the next generation that you can make a difference.”

The ceremony concluded with the singing of the Georgetown Alma Mater and the offering of  a benediction from Reverend Robert M. Hussey, S.J.

Honorary degrees are bestowed upon commencement speakers each year. Additionally, any of Georgetown’s graduate or undergraduate schools, or the president of the university, can nominate individuals for an honorary degree. Nominees must have achieved eminence within their careers or scholarship and and must have a relationship with the university or be involved with work that is closely related to the university’s mission.

The university bestowed an honorary degree upon Wuerl’s predecessor, Theodore Cardinal McCarrick, in 2004.

“I was … surprised more students weren’t in attendance. I expected the audience to be predominantly older, but I had anticipated a larger student turnout,” Cuppari said.

Cuppari said that she thought that the speakers of the event placed an emphasis on Georgetown’s Catholic identity.

“As for representing our Catholic identity, I thought the ceremony did an excellent job. President DeGioia looked absolutely thrilled to be presenting Cardinal Wuerl with his honorary degree, and the standing ovations for his Eminence showed how well received he was at Georgetown,” Cuppari said.“This was definitely a great opportunity for Georgetown to reconnect to its Catholic identity and, as a Catholic, I was happy to see Georgetown reaffirm its Jesuit and Catholic heritage.”