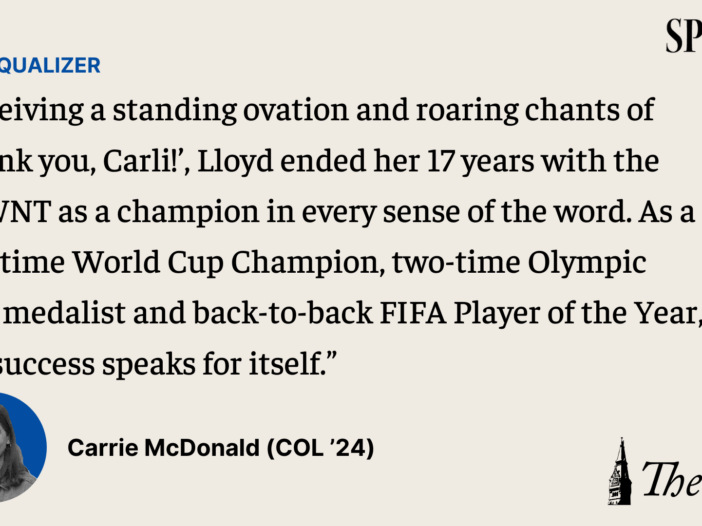 As she stepped off the international soccer pitch for the 316th and final time, U.S. women’s national soccer team (USWNT) star Carli Lloyd closed out her legendary career with a dominant 6-0 win against South Korea and cemented her legacy as one of soccer’s all-time greats. In doing so, she passed the torch on to future generations of players looking to follow in her impossibly large footsteps; it was no coincidence that Lloyd started her final game as captain of one of the USWNT’s youngest lineups in a long time.

Receiving a standing ovation and roaring chants of “Thank you, Carli!” Lloyd ended her 17 years with the USWNT as a champion in every sense of the word. As a two-time World Cup Champion, two-time Olympic gold medalist and back-to-back FIFA Player of the Year, her success speaks for itself. She brought quantity and quality to the team, ending her career with 134 goals for her country — the third-most in USWNT history — and an incredible 316 appearances, the second-highest tally in world soccer history.

Yet Lloyd’s impact on the team cannot be characterized by these impressive statistics alone. Lloyd will be remembered not for how many times she found the back of the net, but for her unapologetically relentless work ethic.

I will never forget the images of a devastated but nevertheless determined Lloyd sprinting up and down the pitch after a semifinal loss to Canada at the Tokyo Olympics. This was just days before scoring two goals in the bronze medal match, ultimately leading her heartbroken team to the podium.

While Lloyd is leaving the sport, her fiercely competitive spirit will endure. Her resilience will be the most important aspect of her legacy and will persist in the attitudes of her teammates. The younger generation of national team players will have to carry the mercilessly high expectations of the world on their shoulders. When they inevitably fall short, Lloyd’s lessons in tenacity will help pick them back up.

Head coach Vlatko Andonovski has been criticized for choosing to play experienced players like Lloyd instead of developing the wealth of young talent at his disposal. Lloyd’s retirement opens the door for these players to gain valuable playing time on the international stage and to start to craft their own new USWNT era as the team turns its attention to the 2023 World Cup and 2024 Olympic qualifying tournament.

Among the rising stars is 22-year-old midfielder Catarina Macario, who has been coined the future of the USWNT. Macario is able to create innumerable offensive opportunities, while her sharp dribbling skills cause the best of defenders to misstep. She shocked the soccer world by signing with European powerhouse Olympique Lyonnais in France instead of entering the National Women’s Soccer League (NWSL) draft following her college career at Stanford University, but her untraditional decision seems to have paid off. Macario is thriving in the French Division 1 Féminine and has become a regular starter for the best club team in the world, becoming an instrumental force behind Lyon’s undefeated record so far this season in both the French domestic league and the European Champions League.

Forward Sophia Smith is an equally exciting prospect. She made history in 2020 when, at 19 years old, she became the first teenager to be drafted into the NWSL and then became the first player born in the 2000s to earn an international cap for the USWNT in November 2020. Smith is electrifyingly fast on the ball and can follow with unerring accuracy. This 2021 NWSL season, she led the league in both shots and shots on goal.

I am curious and excited to see how these players make their mark on the international stage. In 17 years, I would not be surprised if we were comparing their impacts to that of Lloyd. As the top-ranked team in the world, many worry the USWNT can only fall in one direction, particularly after a disappointing third-place finish at the Tokyo Olympics. However, the world has not had the chance to see the real depth of the U.S. talent pool, the secret weapon that sets the U.S. apart from the rest of the world. Lloyd may have hung up her cleats, but her impact on the team will be everlasting and the USWNT will not stop striving for greatness.