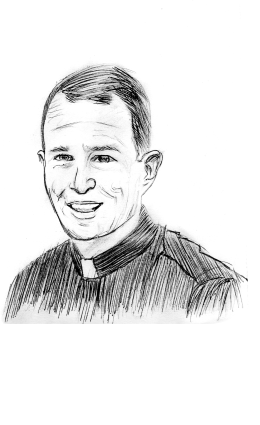 Last weekend, I spent some time in the Jesuit cemetery here on campus. As part of a tour for seniors and their parents, I walked among the graves and told the stories of several of the Jesuits buried there.

I found myself inspired once again by the work of great men who have arisen in each generation. Fr. Patrick Healy, S.J.,  positioned the university to serve the national mission of reconciliation after the Civil War. Fr. Gerry Campbell, S.J., followed the call of the Second Vatican Council and made leadership and interreligiousdialogue central to Georgetown’s identity. Fr. Timothy Healy, S.J., gave the university national and global aspirations and an expanded research profile.

I was also struck by the generations that are less well-known. These include the Jesuit priests and brothers who taught, offered Mass and gave spiritual counsel daily, maintained buildings and worked in labs and quietly tended to the spirit, heart and mind. In an equally important way, they contributed to making this Hilltop a sacred place that has formed so many generations of students.

The tour raised a deep question for me — one that resonated in the wake of Jesuit Heritage Week: How does this generation — my generation and yours — carry forward this tradition? How are we to bear the lofty vision of Fr. John Carroll, S.J., and Patrick Healy while also giving witness to the gentle, quiet prayerfulness of the Jesuits who daily supported and gave life to that vision? Amid those graves, I noticed a tension in myself between the aspiration to greatness and the equally important call to depth and groundedness.

I recalled the words of Jose Ortega y Gasset, the Spanish philosopher and historian who suggested that there is nothing more humbling than recognizing that one belongs to a generation. Until you gain this perspective, you can think that all history depends on you, and that all that you do is a new discovery and a unique accomplishment. But once you see the generations before you, and see your own generation for what it is: historically contingent, living out its one brief moment on the planet. You cannot help but take a more humble — and interestingly, more grateful — stance.

In a remarkable way, telling our story, especially about the diverse generations that came before, helps us become the “generations to come.” Remembering that this university is built not just on its shining moments of triumph but also on its long hours of unseen work and study and conversation and service — and even failures, from time to time — helps us take up our place in history. And more and more, I think it provides an important corrective for us, reining in our sometimes insatiable appetite for success and greatness and reminding us of the virtue of humble groundedness.

Of course that word, “humble,” is not featured on resumes or job descriptions very often. But it might be the most important thing we can learn here. The word comes from the Latin humus, which means “of the earth.” Gardeners will tell you that in English, humus is the most nutrient-rich soil. It produces. And it does so precisely because it has been enriched by the life that came before; it is filled with the organic matter of previous generations.

Humus is also the root of another word: humor — something that can be sorely needed in our constant rush to win awards and achieve perfect grades. With a generational perspective of who contributed to greatness even as they lived with their own fads, follies and foibles, we can laugh in a healthy way about ourselves. Humor cuts the sting out of our failures and gently pushes us to learn from mistakes and misfortunes, and to move forward in hope.

As I finished the tour of the cemetery, amid my brothers who are now literally “of the earth,” I found myself saying a little prayer that our generation — students, faculty, staff and Jesuits — might embrace this moment, in all humility, and bear fruit not just in the greatness that wins accolades, but in the depth and groundedness that are most truly human.

Fr. Matthew Carnes, S.J., is an assistant professor in the government department. He is one of the alternating writers for AS THIS JESUIT SEES IT …, which appears every other Friday.