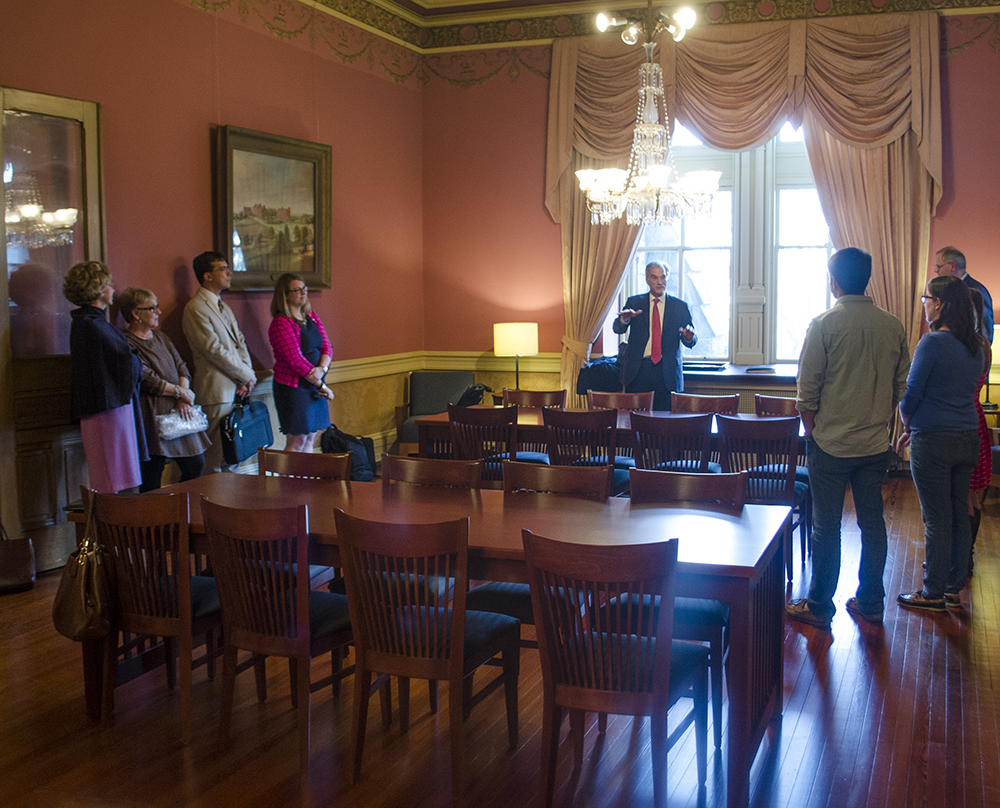 The university’s newest study space, the Carroll Parlor, reopened Thursday on the first floor of Healy Hall after being converted from an art show room. Dedicated to senior undergraduates, the study space features three tables with seating for about 25 people.

The room previously was used as a showplace for significant items in Lauinger Library’s collections, and a number of paintings from the collection still adorn the walls of the study space. However, most items were moved to various other locations around campus to accommodate the new space.

Three members of the Senior Class Committee, including Chair Bridget Mullen (COL ’15), were present at Thursday’s opening to receive an honorary university seal dating back to about 1900. The seal, a replica of the ones decorating the ceiling of the Carroll Parlor, was presented by Vice President for Student Affairs Todd Olson and Provost Robert Groves to commemorate the opening.

“Carroll Parlor is a really historic space on campus, and I think we all know, especially students who have been here for four years, that space is at a premium at Georgetown,” Mullen said. “So it really means a lot to have a space that is dedicated specifically to seniors.”

The new study room, located next to the Campus Ministry office, was proposed by the Campus Life Working Group in 2013 and renovation of the space began in late 2014, according to Olson.

Olson said that the new study space is a symbolic reflection of the university’s emphasis on undergraduate education. Though a number of graduate study spaces exist on campus, this is the first uniquely undergraduate space dedicated to seniors.

“I’m personally excited that this will be a special place for senior students to spend time to study together, to make special memories in their final year on the Hilltop,” Olson said.

Groves said that the room is symbolic not only in its purpose, but also in its location in Healy Hall.

“This is prime real estate if you don’t know that,” Groves said. “People would kill for this room; you got it.”

The study room will remain open whenever Healy Hall is open, from 7 a.m. to 10 p.m. every day. Olson said that though the room is intended for seniors only, there will be no security measures or enforcements to check that only seniors study in the room.

“We’re not going to sort of kick other students out, but we wanted to send a message about what the space is,” Olson said.

Groves said that he is hopeful the study space will cement the importance of academics at Georgetown and be a resource for generations of students to come.

“I think this is just a dynamite use of this space,” Groves said. “When tours come by, we can say there’s scholarship here going on at Georgetown.”