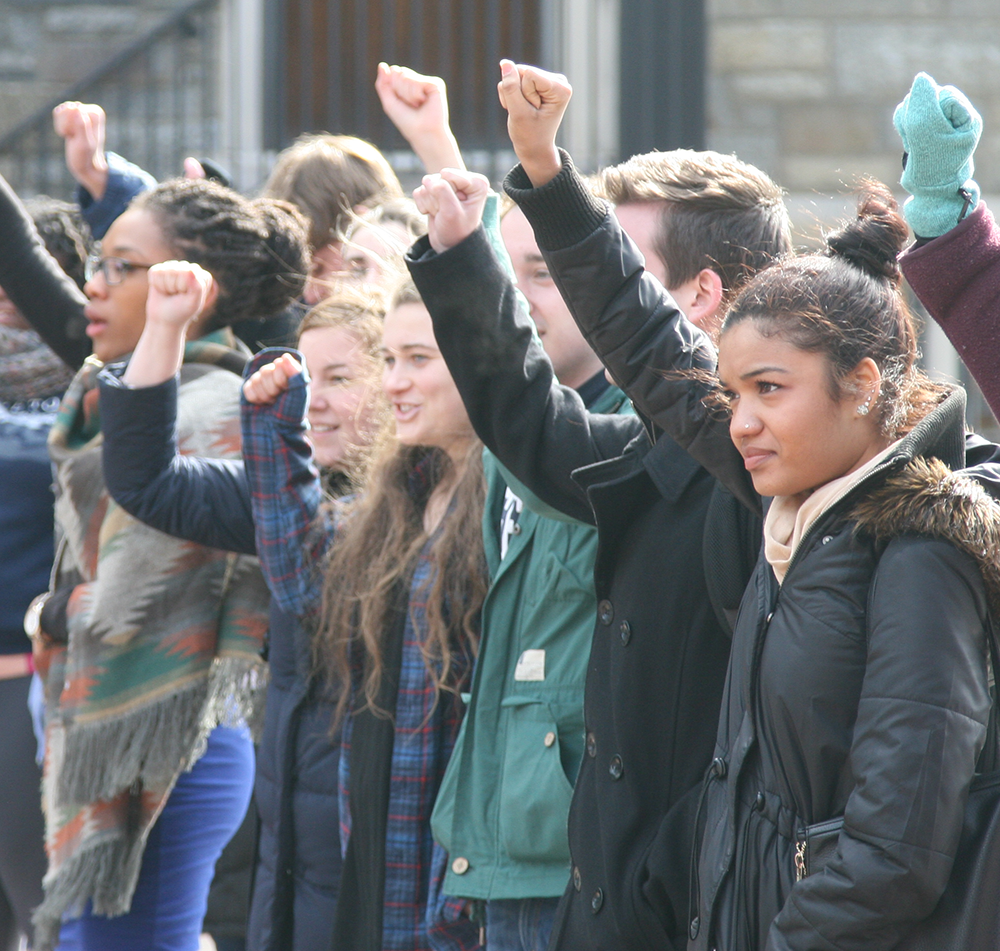 In response to a cartoon in the Georgetown Voice, students organized a town hall discussion and demonstration in Red Square on Sunday and Monday, respectively, to augment campus-wide awareness about racism and responsible satire.

The Page 13 cartoon, published in the Voice’s Feb. 19 issue, depicts then-GUSA executive candidates Chris Wadibia (COL ’16) and Meredith Cheney (COL ’16) in a horse costume, beaten by now-GUSA president- and vice president-elect Joe Luther (COL ’16) and Connor Rohan (COL ’16) wielding two bats that read “Satire” and “Heckler.” Two bystanders at the bottom of the cartoon discuss the scene, with one saying, “Should we make them a grave?” The cartoon was met with criticism for depiction of violence against African-Americans, since Wadibia is black, as well as misogyny, as Cheney is depicted as the horse’s rear.

According to Georgetown Voice editor-in-chief Dayana Morales Gomez (SFS ’16), the cartoon was meant to criticize satire publication The Georgetown Heckler — run by Luther and Rohan — and its treatment of Wadibia and Cheney. In an article posted Feb. 18 titled “The Georgetown Heckler Endorses Joke Candidates Chris and Meredith for GUSA Executives,” the Heckler staff criticized the ticket’s minimal platform and Wadibia’s comments in the presidential debate Feb. 16.

Morales Gomez said the cartoon was redacted and removed from the Voice’s website immediately after the newsmagazine heard of the criticism.

“We don’t have a huge staff in the office every week, and most articles and drawings are coming in on production night, so mistakes slip through the cracks,” she wrote in an email. “Sometimes we forget an Oxford comma; sometimes we misattribute a quote. This week we neglected to consider all implications of Page 13’s drawing. The intent of the drawing was to criticize the Heckler, so we were not expecting a response like this. That being said, we have been receptive to the response and have since redacted the drawing. We are working to make sure a drawing like this one never again makes it to print.”

The Voice also issued a formal apology for the cartoon on its website Friday night, and Morales Gomez said that they are in the process of developing guidelines for their cartoon page.

“I think most are being receptive to our apology,” she wrote. “An apology obviously can’t take back the drawing or the hurt, but we hope that what people really believe in our apology is that we are working to do better. We don’t want this drawing to be seen as a representation of what the Voice is or what it stands for, but we are excited about where the conversation is going.”

Criticisms of the cartoon abounded on social media, leading to the creation of two events.

The first, a town hall discussion on Sunday, organized by the Black Leadership Forum, brought together over 100 students and administrators including Wadibia, Page 13 editor and cartoonist Dylan Cutler (COL ’16), current GUSA President Trevor Tezel (SFS ’15) and Vice President Omika Jikaria (SFS ’15), Luther and Rohan, as well as Vice President for Mission and Ministry Fr. Kevin O’Brien, S.J. The event, originally located in the Intercultural Center, had to be relocated to St. William’s Chapel because of the large turnout.

The discussion was moderated by Innocent Obi (SFS ’16), and any student in the audience could share their thoughts and concerns about the cartoon.

Kimberly Blair (COL ’15), the organizer of the Monday demonstration, spoke at the town hall about how she connected the cartoon to police brutality occurring in the United States.

Matthew Robinson (COL ’18) said he was disappointed that the cartoon was published.

“You should never forsake writing and editing material for a punch line,” Robinson said. “As a member of the Georgetown community we need to focus on intellectualism, never compromising intellectualism, never compromising journalistic integrity and never ever ever using anything that could be seen as racially separatist or even misogynist. I think these are things we need to discuss.”

Javan Robinson (MSB ’15), who opened the town hall, took a different perspective, and said that although the cartoon upset him, he believes that the cartoonist and editors may not have understood its implications.

“The great thing about Georgetown, that has shaped me to be the person that I am, is that I have been able to meet and speak with people from all over the world who have had different experiences, and I wouldn’t change that for anything,” he said. “Maybe, they didn’t know that this could be wrong, and they didn’t know the issues that could come from this, which for me is honestly hard to see because I am an African-American male,” Robinson said. “It is definitely possible that they did not see that.”

Wadibia also spoke, and said that although he does not harbor ill will regarding the content of the cartoon, he hopes that it can encourage campus-wide discussion about racism.

“I just want to say, I am by no means angry at all,” Wadibia said. “I am very sad and a little disappointed. I stand before you guys because I believe in my ideals of Georgetown. I am not a perfect individual, no one in this room is perfect.”

Although Morales Gomez was present at the town hall, she did not speak. Cutler, instead stood and delivered a speech, apologizing.

“I came here because I want to apologize to the community. I made a mistake, I ignored perspectives outside my own and I tried to spread my own message using imagery that was far too severe,” he said. “In doing so, I failed to look outside myself. And you know what, that’s the result of my privilege.”

Cutler said that he encourages the community to help educate him about his actions and about racism.

“I stand with you, I ask to be your ally,” Cutler said. “I don’t want to contribute to racism and I don’t want to make anyone feel afraid. It is not my intention to spread a message of hate. I want to help silence the message of hate and it is apparent that I still have a lot to learn in order to do so. So I invite you, please come up, introduce yourself to me and I invite you to teach me. I promise, I’m really not as bad as that cartoon may have led you to believe.”

A demonstration in Red Square followed on Monday. More than 100 students and faculty took part in the silent demonstration, which began at 2 p.m., standing in a circle and raising their fists for 10 minutes. Demonstrators included Luther, Tezel, Wadibia, Cheney and O’Brien.

Blair spoke to the crowd about the cartoon after the silent demonstration, encouraging community involvement in other Georgetown projects. She passed around a petition urging the university to pass a diversity course requirement and discussed standing in solidarity with Aramark workers for improved conditions as their contract with the company expires in March.

“This is what coming together looks like,” Blair said during the demonstration. “I want to stand today in solidarity with each other. … We’re trying to create unity and consciousness so that you can put yourself in somebody else’s shoes while you’re here at Georgetown.”

Demonstrator Kamli Sirjue (MSB ‘16) said that she thinks a larger discussion on race definitely needs to happen at Georgetown.

“I’m here to support Chris and Meredith because that comic was extremely disrespectful, and I think it needs to be brought to the campus’ attention,” Sirjue said. “We really need to think about racism and sexism when we’re doing these things. It’s unacceptable.”

The committee will release the results of its discussion, which is not open to the press or public, in a week, according to Kleinman. The group will evaluate the complaint and decide whether to refer it to a sanction or educatory body or to not take action.

“We debate the question of whether or not the complaint has merit,” Kleinman said of the committee’s process. “In other words, whether or not we believe it should be referred to a sanction or an educatory body and whether or not we as the student expression committee need to engage in further education or perhaps need to release a clarifying document about the policy or revise the policy itself.”

This particular issue may be referred to the Media Board or Office of Student Conduct, but Kleinman said since this is the first time the committee has ever reviewed a case from student media, he is unsure of what will occur.

In 2008, The Hoya published an April Fool’s issue containing racist and other inappropriate material, leading to an office sit-in by students.

The university issued punitive measures, including sanctions and increased structural oversight. It remains unclear if the Voice will be subject to official punishment.

Olson and Lord deferred comment to Cohen Derr, who said that the committee is unsettled by the cartoon but pleased to see student discussion in its wake.

“Although we were disappointed that the Voice chose to publish this cartoon, we have been encouraged by their efforts to engage in understanding issues of diversity,” Cohen Derr wrote in an email. “The extent of respectful and constructive dialogue that has resulted from this incident is a powerful learning experience and testimony to the strength of our community.”