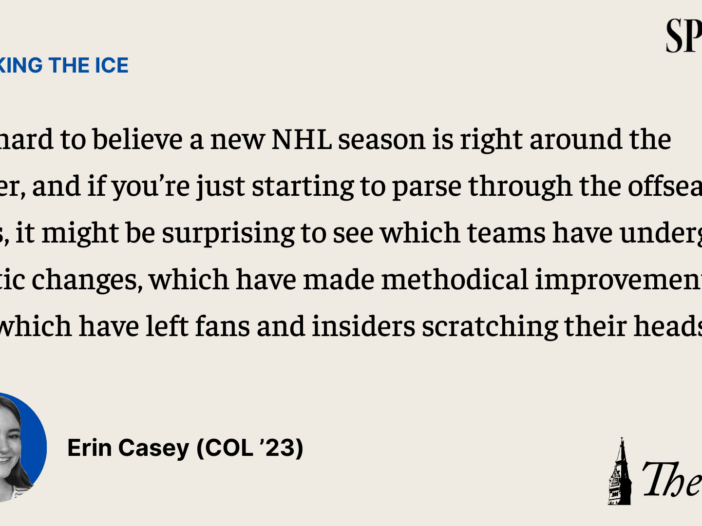 It’s hard to believe a new NHL season is right around the corner, and if you’re just starting to parse through the offseason news, it might be surprising to see which teams have undergone drastic changes, which have made methodical improvements, and which have left fans and insiders scratching their heads.

When Johnny Gaudreau and Matthew Tkachuk both decided to part ways with the Flames, they dealt the organization a seemingly impossible hand. Gaudreau and Tkachuk made up two-thirds of one of the most offensively dynamic lines in the league, as their line produced the most goals in the 2021-22 season.

Calgary’s front office had its work cut out for it trying to replace Gaudreau, a career point-per-game player, and Tkachuk, one of only two players under 25 years old to score 100 points last season. Nonetheless, management made smart decisions to remain serious contenders.

The Flames chose to trade Tkachuk rather than negotiate a short-term contract and risk losing him to free agency in the future after he informed the organization he had no intention of signing a long-term deal with them. In a surprising blockbuster trade, Calgary dealt Tkachuk to the Florida Panthers in return for Jonathan Huberdeau, MacKenzie Weegar and Cole Schwindt. Huberdeau recorded a career-high 115 points last season, and Weegar is an excellent two-way defenseman.

The Flames then cleared salary cap space to sign Nazem Kadri, the most sought-after free agent after Gaudreau. Kadri played the best hockey of his career last season and significantly contributed to the Colorado Avalanche’s success.

Calgary’s front office responded to significant challenges with smart additions to its roster. Fans should be excited to watch a different but still very talented team hit the ice in October.

While Ottawa did not have a particularly successful season last year, the Senators have made significant improvements to their roster this offseason to add to their young core. They traded for Alex DeBrincat and Cam Talbot, and signed free agent Claude Giroux.

At just 24 years old, DeBrincat put up 78 points in 82 games last season for the Chicago NHL team and absolutely has the potential to be a point-per-game player in the future.

DeBrincat can be someone that the Senators can build around for years to come. His signing alone is reason for Ottawa’s fans to get excited for the future.

Talbot is a significant improvement over the Senators’ goalie last season Matt Murray, who recorded a 3.23 goals-against average and .899 save percentage over his two seasons with the Senators. Even though Talbot’s age makes it unlikely that he will be the Senators’ long-term solution, he will provide consistency and give the team the chance to win more games.

The addition of Giroux makes the Senators a far more offensively dangerous team. Giroux, a seven-time NHL all-star, also adds the kind of veteran leadership teams like to bring in to help mentor younger players. Ottawa’s offensive core includes captain Brady Tkachuk, Josh Norris, Tim Stützle and now DeBrincat, all of whom are under the age of 25. Giroux’s presence can help these players reach their full potential, which will be crucial to the long-term success of the team.

The Senators might be a couple years away from making the playoffs, but they are certainly on the right track.

After ending the regular season with one of the worst records in the league, it is hard to argue Chicago has any other choice but to commit to a rebuild. Although team executives have made clear their intention to do so, they have consistently missed the mark.

This offseason, Chicago chose to part ways with DeBrincat, Kirby Dach and Dylan Strome. Each of them is young, and each, especially DeBrincat, has the potential to be part of a winning system. Instead of rebuilding around a young core, Chicago has chosen to cling to Jonathan Toews and Patrick Kane. To the front office’s credit, Chicago seems to be trying to move Kane, but it is hard to imagine a successful rebuild in Chicago’s future so long as it continues to deal young talent and hold on to depreciating assets.

Chicago desperately needs to invest in and develop young talent to have a real shot at being successful once again.