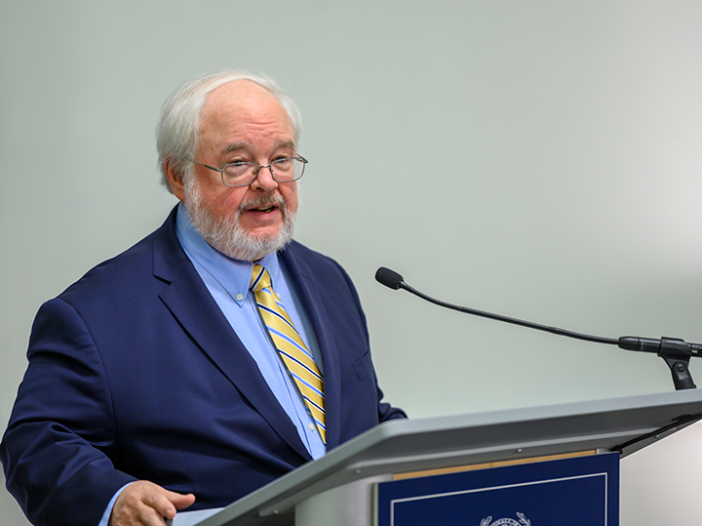 The panel focused on the impact Francis has had during his six years leading the Catholic Church and challenges that he pope currently faces, particularly the clergy sexual abuse crisis. Gregory was joined by Helen Alvaré, an anti-abortion advocate and law professor at George Mason University, and John Carr, director of the Initiative on Catholic Social Thought and Public Life at Georgetown University at the event in the Dahlgren Chapel of the Sacred Heart.

The panelists spoke about the resistance movement within the Catholic Church against Francis, as well as the implications of the issues he has chosen to prioritize on during his time as pope. The speakers also reflected on the challenges currently facing the church, including the clergy sexual abuse crisis and controversies about the role of women.

The extent of the pushback against the relatively liberal Francis, who was named pope in 2013, is anomalous, even for an ancient institution like the Catholic Church, according to Gregory.

“Opposition to the pope is not new, but what is new is the level and intensity that is there,” Gregory said. “It’s the insidiousness of the opposition movement that I think is scandalous for us.”

The Office of Mission and Ministry and the Initiative on Catholic Social Thought and Public Life hosted the panel, “The Francis Factor Today,” as part of the Dahlgren Dialogues series. The series, which was started in October 2017, features conversations with leaders on contemporary issues involving faith and public life.

Francis has emphasized the church’s teachings on protecting the environment, embracing migrants and being more inclusive toward LGBTQ Catholics. Many Catholics oppose Pope Francis because of personal or political motivations, rather than with constructive criticism, Carr said.

Public controversy over Francis’ leadership has lasted for years. Journalist Ross Douthat warned that Francis could increase opposition from conservative Catholics and divide the church in a 2015 article in The Atlantic. In 2017, a high-ranking German cardinal spoke out to oppose Francis’ support of reforming the church’s ban on divorced Catholics receiving communion.

The widespread use of social media can also explain why the opposition movement to Francis may appear to have more traction than opposition to previous popes, according to Gregory.

“Social media gives the opposition a megaphone,” Gregory said. “The Holy Father has to deal with divisions that are trumpeted with no control.”

The way the pope responded to his own mistakes handling the cover-up of the clergy sexual abuse scandal in Chile demonstrated his leadership, Gregory said.

While in Chile, Francis accused survivors of sexual assault of slandering the priests who abused them. Francis later apologized for his statements, saying he received inaccurate information and taking responsibility for contributing to the crisis. Gregory was impressed by the pope’s humility.

“His apology was stunning,” Gregory said. “He’s revealed his humanity in startling ways.”

The pope has also attempted to address the unequal representation of women in the church.

The direct way that Francis speaks about the need for increased involvement of women in the church is effective in bringing attention to the issue, according to Alvaré, who is the adviser to the Pontifical Council of the Laity and the U.S. Conference of Catholic Bishops.

“One of the cool things about Pope Francis is he’s very blunt steering a big ship,” Alvaré said. “He says big things about the role of women in the church, and he says them many times, and I’m glad for that because this ship has to be moved.”

The pope’s mantra of emphasizing service over servitude is something that should be applied to women’s role in the church, according to Alvaré.

“I think there needs to be more of an involvement of women on an ongoing basis,” Alvaré said. “We’re not starting from scratch. There’s women doing all kinds of things. But we’re not celebrating it enough, and we’re not realizing it enough.”