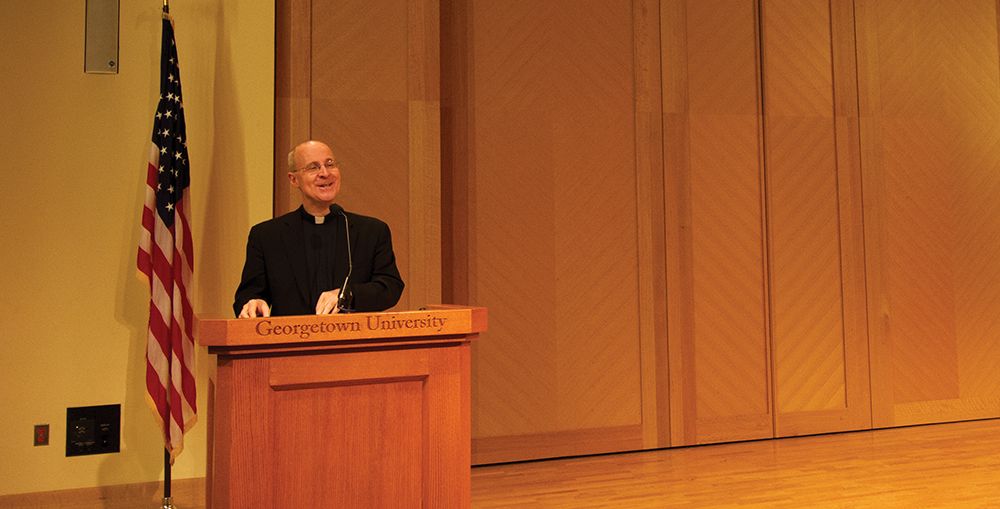 Open dialogue between the LGBT community and the Catholic Church is necessary to eliminate stigmas associated with LGBT Catholics, author Fr. James Martin, S.J., said Wednesday at a book talk cohosted by the Georgetown University Library and the LGBTQ Resource Center.

Martin discussed his latest book, “Building a Bridge: How the Catholic Church and the LGBT Community Can Enter into a Relationship of Respect, Compassion, and Sensitivity,” which was published in June of 2017.

Martin has authored 11 other books and has made appearances as a commentator on CNN, NPR, Fox News, Time, HuffPost, The New York Times and other news outlets. Pope Francis also appointed Martin as the consultor for the Vatican’s secretariat for communication in 2017.

Martin called for shared and celebrated life experiences between people from all walks of life.

Martin’s acceptance of the LGBT community in the Catholic Church has drawn criticism from conservative members of the Catholic Church, he said. In September, he was disinvited from the prominent Catholic Seminary Theological College for backlash over his divisive views. Despite the backlash, Martin still remains outspoken in his belief that LGBT individuals deserve to be welcomed into the church.

“You can’t be sensitive to the LGBT community if all you do is issue documents about them, preach about them or tweet about them, without actually knowing them,” Martin said. “One reason I think the institutional church has struggled with that sensitivity is that many church leaders still do not know many gay people.”

Martin also spoke about the distinction between the challenges faced by women and members of the LGBT community within the Catholic Church.

“Now, some people say, ‘no, women are more marginalized,’” Martin said. “Women are marginalized in this church, but not to that extent. There are no things that are comparable for LGBT people. ”

Martin said that if the church fails to interact with members of the LGBT community, it is failing to follow Jesus’ call for acceptance.

“That lack of familiarity and especially friendship means that it is more difficult to be sensitive,” Martin said. “How can you be sensitive to a person’s situation if you don’t know them?”

To forge unity among the two communities, Martin urged Catholics to reach out and befriend members of the LGBT community if they have not already.

Ultimately, Martin said, building these bridges is not important solely for unity within the church, but something Jesus himself would do.

“When Jesus encountered people on the margins, he saw not categories, but individuals,” Martin said. “[LGBT people] are seen as the other. But, for Jesus, there is no other. There is no ‘us and them.’ There’s just us,” Martin said.

Martin concluded by reiterating the importance of dialogue between members of the LGBT community and the Catholic Church, again using Jesus as an example.

“This is what the church is called to do with people who feel like they’re on the margins,” Martin said. “Encounter them. Listen to them. Accompany them. Heal them. Help them. Love them. Because that’s what Jesus did.”