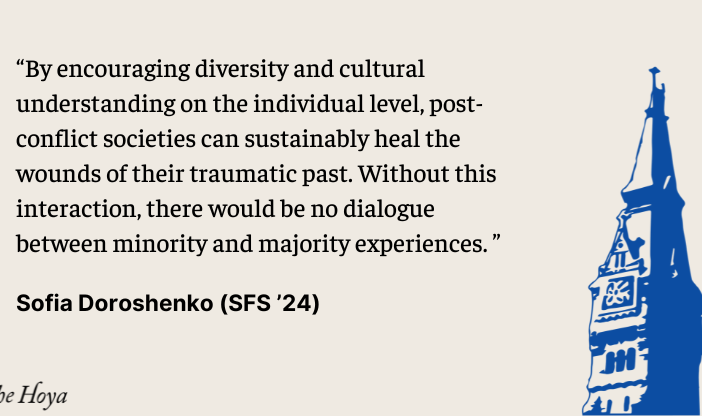 Walking the streets of Kazimierz, the historical Jewish district in Krakow, Poland, under the summer heat of late June, I clearly noticed the presence of Jewish memory in the air. There are countless museums on Jewish life in Poland, cafes and bars with Jewish decorations and gift shops selling tokens of Jewish symbols. This material memory, though, is incomparable to the neighborhood’s main attraction of the moment: the 31st Jewish Cultural Festival in Krakow.

The festival, the largest Jewish festival in Europe, brings concerts, performances, artists, workshops and lectures to the streets of the old Jewish quarter. This year, the crowd was an intersection of local Poles, Jewish travelers, European tourists and Ukrainian refugees, all of whom found themselves in the nexus of the celebration.

Yet I quickly realized that this abundance of Jewish life is not the norm — not in Poland, Krakow, or even the Old Jewish Quarter. Locals assert that they would be surprised if even 200 Jews lived in Krakow. Prior to World War II, Jews made up almost 25% of Krakow’s population, while today they make up less than 1%. In fact, the founder of the Jewish Cultural Festival is not Jewish, and only a small percentage of organizers and volunteers were Jewish. How then, in this post-conflict Polish space, is it possible for the minority culture to be revived, depicted and redistributed by non-Jews?

In spaces where minority groups — in this case Jews in Poland — have little to no representation, they cannot singularly sustain their cultural heritage on a national scale. Jewish culture is still considered a major part of the Polish national identity, but after the atrocities of World War II, a lot of this focus was on the absence of Jewishness in Poland instead of the presence of a rich cultural heritage. For instance, many tourists’ experiences only involve visiting Auschwitz and learning about the Holocaust. Jewish culture is viewed through the lens of suffering and destruction. But the Jewish Cultural Festival, where memory of Jewish identity shifts away from hardship and towards culture, is the ideal space to learn about Jewish heritage in Poland through celebration and joy.

During my stay in Krakow, some people did believe that because there are very slim chances of a significant future Jewish population, the Jewish past is better left where it is: the past. Yet I also met young people who were discovering their own Jewish ancestry, appreciating Jewish art or cultivating a Jewish identity by becoming more religious or converting. I also found that many non-Jewish Poles were still interested in exploring Jewish culture, for instance by majoring in Jewish studies or even volunteering at the Festival because they wanted to learn more about the culture. For all of these people, Jewishness lies not only in the past, but also in the future. This orientation towards the future is in turn the focus of the Jewish Cultural Festival, where memory of Jewish identity focuses on its cultural experience like music, legends, or art. And for all the visitors of the festival, from non-Jewish Poles who are not familiar with Jewish culture to European tourists who just happen to be around, it is an ideal space to learn about Jewish heritage in Poland through celebration and joy.

Even though the festival was founded by and is primarily run by non-Jewish Poles, we must consider that it would be extremely difficult for the minority Jewish population to run such a massive festival and upkeep the memory of Jewish culture without help. It is also important to nuance our understanding of who is inside and outside of a culture, especially since many non-Jewish Poles are familiar with Jewish culture.

Furthermore, Poland’s demographics show that it is a heavily homogenous nation, both ethnically and religiously, with more than 95% consisting of ethnic Poles and more than 85% identifying as Catholic. Since the festival is an event where non-Jewish Poles get to interact with and learn about Jewish culture firsthand, it counters the effects of divisiveness due to an increasingly conservative government. The fact that this interaction is done through music, art and performance only strengthens its personal and profound effect on the audience. By encouraging diversity and cultural understanding on the individual level, post-conflict societies can sustainably heal the wounds of their traumatic past. Without this interaction, there would be no dialogue between minority and majority experiences.

The festival, then, breaks the conventional rules of what we tend to expect about culture. Cultural spaces are always shifting and being negotiated, and it is important to remember that culture can be something that everybody participates in. In the festival’s case, the non-Jewish Polish founder and organizers actively celebrate Jewish culture and uphold the area’s Jewish history in a positive light, when very few other people do. The festival also collaborates with Jewish communities across the globe, bringing them to Krakow and resurrecting, even if impermanently, its Jewish presence. Ultimately, through the arts and performance, non-Jewish Polish cultural curators set out to and succeeded in delving into the roots of Jewish life and transcending the staunch ‘suffering’ narrative of Jewish past in Poland.

Thanks to the research opportunity provided by the Mortara Center and the generosity of the Jewish Cultural Festival in Krakow, I was able to experience the Festival firsthand.

Sofia Doroshenko is a junior in School of Foreign Service.