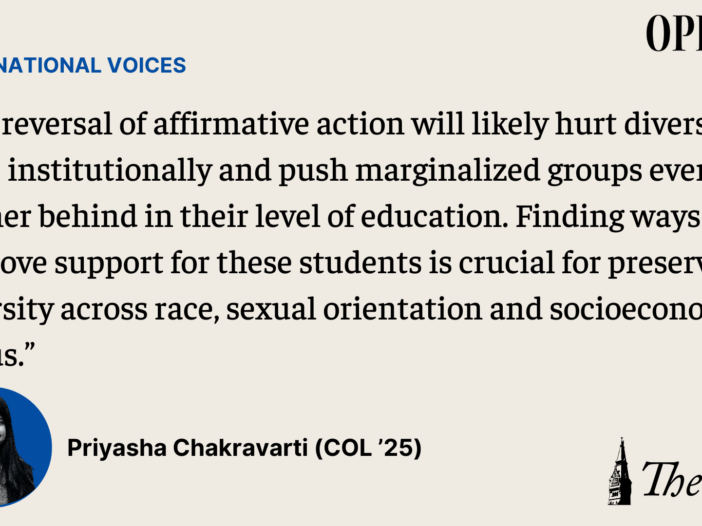 The Supreme Court of the United States (SCOTUS) is currently reviewing the 2003 affirmative action case Grutter v. Bollinger, and their ruling has the potential to overturn a 50-year-old precedent that aims to increase opportunities for marginalized populations in educational institutions and the workforce. It is a pivotal time to reflect on the importance of diversity in education and take steps to increase representation of minority communities in an equitable manner.

The Students for Fair Admissions organization, a nonprofit group of over 20,000 students and parents who believe that the consideration of race in college admissions is unfair and should be terminated, filed two cases against Harvard University and the University of North Carolina (UNC) at Chapel Hill in 2014. These cases claim that Harvard and UNC are violating the provisions of Title VI of the Civil Rights Act, which call for “prohibition against exclusion from participation in, denial of benefits of, and discrimination under federally assisted programs on ground of race, color or national origin.”

Recent discourse around affirmative action should prompt Georgetown University to reflect on the diversity of its own student body. Over 47% of current undergraduates are white, which nearly qualifies Georgetown as a predominantly white institution. An August 2022 amicus brief signed by Georgetown and 56 other Catholic colleges and universities indicates the university’s support for affirmative action, but it is imperative that our community fully comprehends the gravity of SCOTUS’ impending decision and rethinks the importance of a diverse student body.

Interaction with peers from diverse backgrounds is one of the most important and fruitful aspects of pursuing higher education. Growing up attending international schools, I was exposed to a variety of cultures and perspectives from a young age, which is something that has made me a more open-minded, globally aware and accepting person.

Diversity can be defined in more ways than race alone. As an international student, for example, I notice that there are not too many of us on campus. As our world becomes more and more polarized, interacting with and understanding other people, regardless of ethnicity or race, is becoming increasingly imperative.

Justice Clarence Thomas has historically questioned the benefits of promoting diversity at colleges and universities. He, along with multiple other conservative judges, has spoken in favor of race-neutral policies, deeming selections based on race as unconstitutional. They argue that such policies can also help maintain a diverse student body by providing students an opportunity to demonstrate their backgrounds more holistically rather than “checking a box,” as Justice Amy Coney Barrett stated.

However, evidence from several universities indicates that diversity rates are likely to decline if Grutter v. Bollinger is overturned. Two of the country’s top public university systems, the University of Michigan and the University of California, were banned from considering race in college admissions decisions for over a decade. This action severely reduced race-based diversity within the student body. In 2021, the first-year class at University of California, Berkeley included 258 Black students and 27 Native American students out of 6,931 total students — just 3.7% and 0.4%, respectively. 1998 was the first admissions year affected by the ban and the number of black first-year students admitted to Berkeley and UCLA reduced by half.

In the past 16 years, the percentage of Black students at the University of Michigan has decreased from 7% to 4%. This is despite extensive outreach and the trial of race-neutral admissions policies. These low numbers not only limit the academic prospects for students of color, but also deter future generations of students of color from applying and enrolling.

These examples illustrate the importance of admission policies that intentionally counter the inequities and implicit biases that impact our higher education system. Though this can be done through affirmative action policies, it can also come in the form of financial and informational outreach to support and encourage historically underrepresented populations to apply to and attend college.

Beyond race, there are several other barriers that prevent qualified students from attending top higher education institutions in the United States, including citizenship and socioeconomic status. From my personal experience as an international student, several of my peers back home faced financial barriers when considering applying abroad, as many U.S. universities offer minimal aid to international students. Georgetown’s Office of Financial Services website states that “financial aid for international students is extremely limited,” which tends to be true across most U.S. universities unless they are one of the five colleges or universities that are need-blind for all applicants. These five institutions include Massachusetts Institute of Technology, Harvard University, Princeton University, Yale University and Amherst College, which are all undoubtedly competitive. For universities to better accommodate new students and new perspectives, they must find ways to lower these barriers and promote diversity.

The reversal of affirmative action will likely hurt diversity rates institutionally and push marginalized groups even further behind in their level of education. Finding ways to improve support for these students is crucial for preserving diversity across race, sexual orientation and socioeconomic status.

Priyasha Chakravarti is a sophomore in the College. International Voices appears in print and online every third Friday.