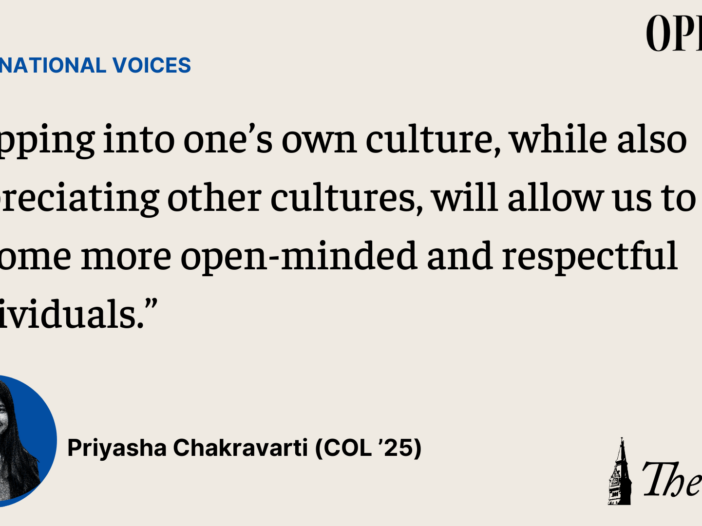 As non-American individuals or those who have spent much of their lives abroad, I have seen non-Western international students fall victim to identity lingos like “whitewashed,” “coconut” or “fresh off the boat.” It may exacerbate existing confusion we already face surrounding the idea of home, culture and identity. The intention may be humor, but it can often indirectly foster more division and distance between groups. It is important for us to rethink how these terms affect other people, regardless of intent, and be willing to embrace our own and other cultures however we choose. Over 14% of Georgetown’s undergraduate students are international, meaning they have lived in more than one country throughout their lives. We must understand the implications of certain identity lingos to help foster an inclusive and diverse campus experience.

Admittedly, I have both used and been on the receiving end of various identity lingos. I am originally from India, but have lived abroad in the Philippines for most of my life. My international exposure and family influence have shaped many of my interests. For example, I am not super into Bollywood movies or music, nor am I very religious. As a result, I have previously been called “whitewashed,” by South Asian Georgetown students or a “coconut,” by my South Asian friends back home, implying that I am not a “true Indian.”

The term “whitewashed,” refers to becoming too assimilated with the West. “Coconut,” implies that though someone may be brown or look Indian on the outside, they are white on the inside, or Westernized. I have been called this before and yet, I consider India home, visit twice a year, love Indian food and culture and speak my native languages. There is no determining factor in how “Indian,” or “not Indian,” someone is. If someone prefers soccer over cricket, but watches Bollywood movies everyday, they cannot directly be classified as “whitewashed,” or “uncultured.” There is no list of attributes one must meet to be Indian enough, or even Asian enough.

The term fresh off the boat (FOB) is often used to refer to immigrants or international students who have yet to integrate or assimilate into U.S. culture, or any other culture in question. Though the term may not inherently be an insult, it is often used with a mocking or judgmental tone. This word culturally distances international students from this new culture, and indirectly pressures us to conform to the culture of the country or place we have moved to.

Since I came to Georgetown University from abroad, I have also been called FOB once. During my first month here, when I was confused about some elements of U.S. culture like paying tips, I was called a FOB by some domestic U.S. students. I appreciated, however, that my friends were very willing to help me through the process of adjusting to a new culture.

Using the aforementioned terms may sow doubt or shame in the minds of these international students or third culture kids. This is why some of my ethnically South Asian friends feel ashamed when they cannot handle spicy food or don’t know how to dance garba. This is why I feel awkward when I realize I don’t know as many mainstream Bollywood songs as mainstream English pop songs.

No student should be held back because they feel judged by others or a pressure to conform to certain aspects of a new culture. Rather than resorting to such terms, we should focus on both celebrating one another’s diversity and helping each other achieve their full potential at Georgetown University. We must understand that those who grow up in different countries and cultures will adopt and retain different parts of their communities. It is truly a beautiful thing to be immersed in a multitude of cultures. At the same time, that may naturally result in a breadth rather than a depth of understanding and experience. However, it is not necessarily our place to judge someone else’s cultural immersion or to what extent they belong to their culture. Instead, we can learn to appreciate each person’s unique makeup since Georgetown is truly a melting pot of so many different cultures.

Through conversations with my friends and South Asian events, I have started to become more familiar with Bollywood and South Asian music, elements that I did not grow up paying much attention to, but something that I am interested in diving into. Tapping into one’s own culture, while also appreciating other cultures, will allow us to become more open-minded and respectful individuals. International or not, our cultural and personal makeup is not up for judgment by other people.

Priyasha Chakravarti is a sophomore in the College. International Voices appears in print and online every third Friday.