In my estimation, a fair number of the students dedicatedly reading The Hoya these first weeks are eager freshmen.

Some want to better know the campus they’ve stepped onto, while others are just itching to join the flagship of Georgetown’s journalistic efforts. Admittedly, others read just so they don’t appear to be eating alone in Leo’s.

For some freshmen, taking the time to read the paper is a sign that they have lost their mojo. No longer the queen bee of a small hive, they are now part of what can feel like a chaotic atmosphere overflowing with activity. These students suddenly find themselves with no court to hold, alone, reading the paper.

For these students, I encourage you to embrace the challenges that come with being a part of this place, and to channel the impressive qualities you know you possess in order into to create something truly worthy of pride.

The first few weeks of Georgetown can come with a lot of rejection. An absurdly high percentage of your classmates are former valedictorians, class presidents or both. For all but five students entering a Georgetown class (barring the case of a tie), neither of these honors will be awarded again at the end of four years.

Even the first weeks can be depressing, as job after club after unpaid service group chooses not to let you participate in their activities. It can sometimes feel like a supersized version of “Mean Girls” where you are dismissed from the table, making the community feel, for a time, like an incredibly daunting place.

I challenge freshmen to reject rejection and to use these weeks as a time of discernment. Seek how God is interested in using your four years on this Hilltop. Perhaps beyond that, seek how God will shape your time on this Hilltop and allow you to be his hands while shaping the world.

Perhaps this perspective shift alone will allow you to change the way that you are able to experience your time here. Rather than feeling discouraged by the lack of attention you are receiving, focus your vantage point outside of yourself and attempt to see, externally, how you can be of service to this school and its community.

In my first weeks at Georgetown, I made a sort of agreement with God. I would throw myself fully into the paths he opened to me if only he would make paths appear.

Time and again during my two years on this campus, new paths have opened. A truly dedicated professor recruited me to leave biology and pre-med for a major far better suited to my interests and designs. A Jesuit priest helped me to challenge my conceptions about what it meant to live up to my God-given potential and to be a leader in faith.

This past summer, living in Washington D.C., working constantly during days and moonlighting at a club at night, I couldn’t believe how much my life had changed in a short year. However, through it all, I felt incredibly blessed by the friendships I formed and the true purpose I felt in the work I had achieved.

Class of 2018: I plea for a similar arrangement to be made between you and God as you enter this campus. Georgetown truly is a community of faith. We find God in many forms, but this school actively encourages a dialogue with the Almighty in a way that few other campuses dare. It would be a shame to pass up the opportuni ty to engage on this campus and engage with your faith throughout your four years here.

In everything you do over the next eight semesters, seek to absent yourself from the conventional and to throw yourself at the opportunities that God presents. Take these opportunities in ways grounded in spirituality and intentional service to others. I am confident that your class has the opportunity to be among the greatest to have walked through our gates, and I look forward to see how you will channel this campus’s unique spiritual energies in setting the world on fire. 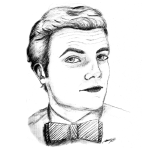 Tim Rosenberger is a junior in the College. The Church and Statesman appears every other Tuesday.