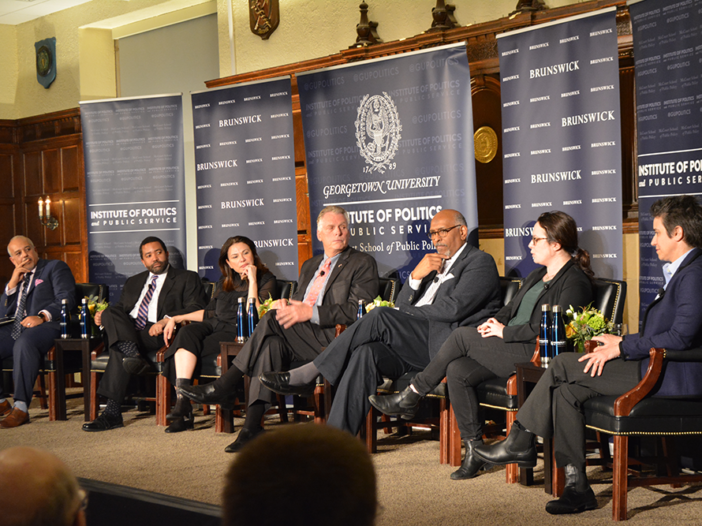 Changing political dynamics like a rise in candidate-centered campaigns and a more engaged electorate will shape the 2020 presidential race, political experts said at a panel event Wednesday.

The event, titled “Road to 2020,” was hosted by Georgetown University’s Institute of Politics and Public Service and the Brunswick Group, a strategic consulting firm. At the event, panelists discussed strategies implemented by President Donald Trump and his campaign that ultimately led to his victory in the 2016 presidential election.

The event comes as the Democratic primary contests for the 2020 presidential nomination have intensified. Most recently, the Democratic Party hosted its 10th scheduled debate in Charleston, South Carolina, ahead of the state’s primary election Feb. 29. Fourteen more states are set to hold their primaries March 3.

Trump succeeded as a presidential candidate because of his ability to increase his name recognition among U.S. citizens, according to panelist Michael Steele (LAW ’81), former chairman of the Republican National Committee.

“Over the prior 15 years, he had a relationship with the American people, officially known as an audience. He built a brand; he built an identity that they latched onto and they liked,” Steele said. “He created this reality television identity presence and people were sucked into it. The essential thing Trump did was he took his viewers and made them voters.”

Trump’s rhetoric and persona have dominated much of the national political discourse, according to panelist Amy Walter, national editor of The Cook Political Report.

“In the 2020 election, there is one thing that matters, and it’s Donald Trump,” Walter said. “It’s been the entire focus of the political ecosystem for the last four years and will continue to drive 2020.”

The shift in the political landscape over the last four years has also been accompanied by a change in voter demographics, according to Doyle.

Through the rise of social media platforms like Facebook and Twitter, public participation in political discourse has increased, Haberman said. As individuals are now able to discuss and express their own opinions on large platforms, the media’s power to shape public opinion has decreased, according to Haberman.

“The press is no longer the gatekeeper,” Haberman said. “We are just covering what’s in front of us and the voters are going to do what they’re going to do with it.”

While Trump leads the Republican primaries with 86 of the 87 delegates that have been allocated so far, voters and politicians have expressed uncertainty over who will become the Democratic presidential nominee after the results of the first three contests. Currently, there is a 51% chance that no candidate receives a majority of pledged delegates for the nomination, according to FiveThirtyEight’s Democratic primary probability model.

McAuliffe said he predicts the race will quickly pare down to a contest between former Vice President Joe Biden and Sen. Bernie Sanders (I-Vt.).

“It’s hard for us right now to really go after Trump because everybody is trying to get delegates. I think a week from today we’re going to have a pretty clear idea,” McAuliffe said, “It’ll probably be down to a two-person race.”