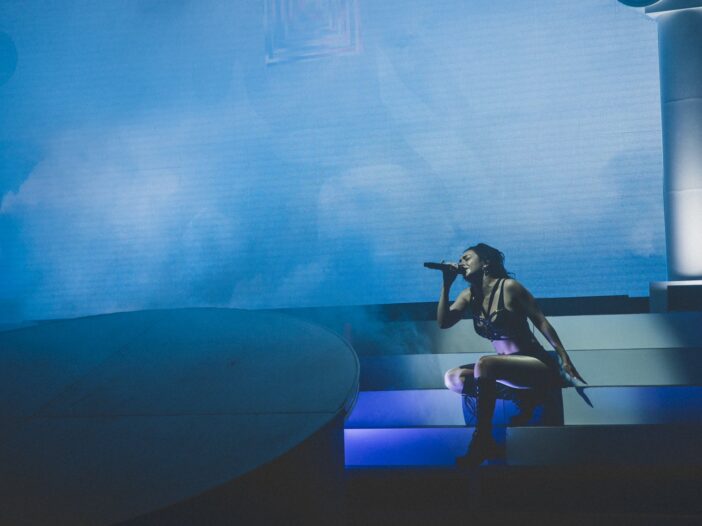 In her final album under Atlantic Records, “Crash,” Charli XCX makes an ambitious attempt to reintegrate into traditional pop music in the English singer’s own distinct musical style, producing a spectacular album in the process.

Charli XCX, born Charlotte Aitchison, rose to fame providing vocals for the 2012 song by Icona Pop, “I Love It.” Following her 2013 debut album, “True Romance,” she moved her sound into pop subgroups, like her acclaimed 2019 album “Charli,” which showcased more electropop and alternative pop.

With “Crash,” it becomes clear that Charli intends to cater to the more traditional style of radio pop, and she greatly succeeds. With dance beats and lyrics perfect for screaming in the car or dancing alone in your room, “Crash” proved the right formula for all listeners. The album has reached No. 1 status in both the United Kingdom and Australia, a first for the artist. Her mainstream-pop approach didn’t sacrifice the integrity of her works, and she manages to beautifully combine the classic elements of pop with her own subtle infusions of her alternative pop sounds and themes.

“Crash” features 12 tracks, all with electric rhythms and catchy melodies that will linger in the listener’s head for days. “Constant Repeat,” for instance, is exactly what it sounds like, featuring Charli repeating the line “Got me on repeat” 16 times. And the line “Yuck, now you got me blushin’ / Cheeks so red when the blood starts rushing,” from the song “Yuck,” is sure to echo through everyone’s head for weeks. The dance beats are just catchy enough without becoming tiresome.

The album relies on synthesized beats to support the tracks, with influences from 1980s pop, disco and modern hits. Her song “New Shapes” has the instrumentation of a classic 80s hit while “Used To Know Me” easily fits into the electro-pop repertoire of college students today.

The style is reminiscent of The Weeknd, harnessing nostalgia mixed with modern beats to entertain all ages. Despite the variety of influences present, the album blends together seamlessly and does not feel uninspired, instead easily standing on its own as a unique body of work. She infuses the classic themes of sex, relationships and break-ups throughout to bring an element of relatability to her tracks.

Throughout the track list, Charli is seeking to appeal to all radio listeners. Her past works have been more stylistically niche, but “Crash” aims to retain the edginess her fans adore while introducing newcomers to the sleek new form of her work. The instrumentation is less aggressive than previous albums and instead opts for smooth, synth-backed tracks alongside catchy hooks.

Within this structured pop framework, Charli makes clear that this album is far from a sell-out only designed to control the Billboard charts. Her lyricism is catchy, but also well-designed. “Lightning” has the groovy instrumentals to play at the beach or at a barbeque, but retains the Charli XCX edge with lines like “There’s danger in the dark of your eyes / But something ’bout you breathes me to life.” Charli marks her transition back into mainstream pop without sacrificing the lyricism that contributed to her rise. She manages to explore cliche topics with a sense of humor and universality that doesn’t dilute the value of her tracks.

“Crash” sets up Charli XCX for an incredibly successful tour later in 2022. Her discography has only grown stronger with this new release and marks the end of an era with her time at Atlantic Records. The eyes of pop fans everywhere will anxiously await her next move, whether it be a return to niche genres or a further commitment to mainstream pop.

Whichever move she chooses, “Crash” has set a high expectation for success.