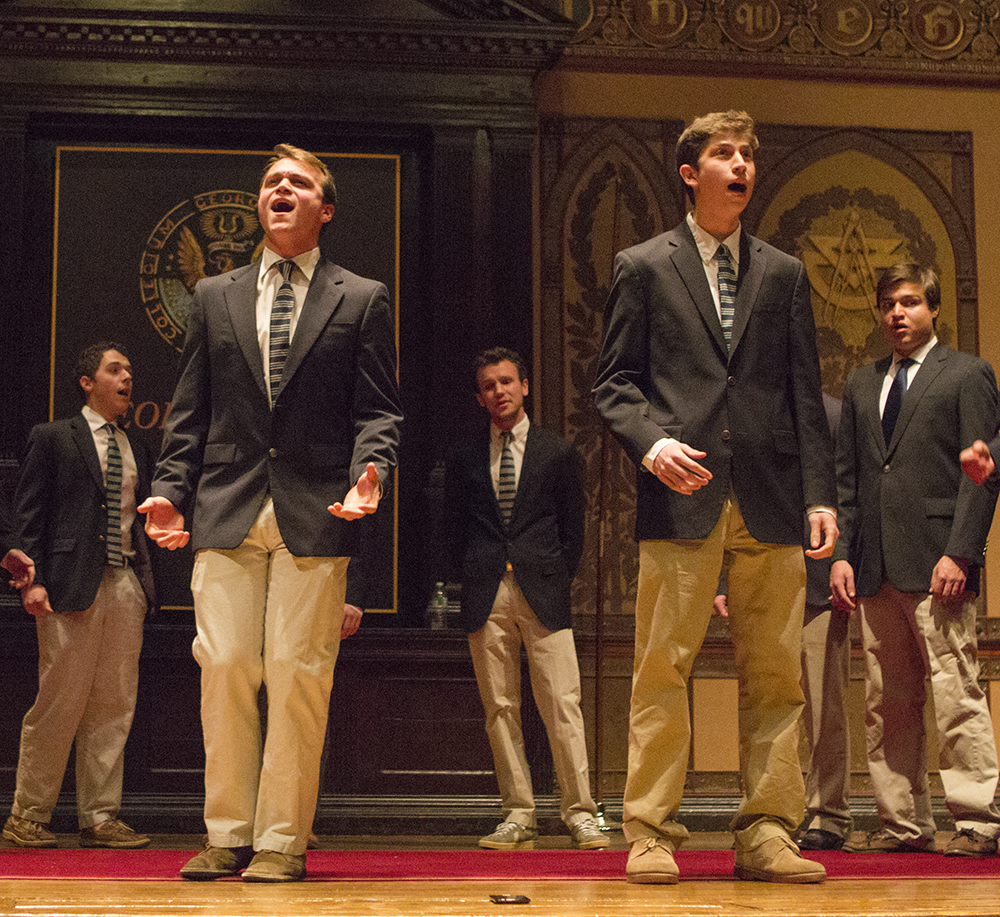 The stoic and hallowed space of Gaston Hall will be filled with music as Georgetown’s a cappella singers gather to share the stage and kick off the 42nd annual Cherry Tree Massacre on Jan. 30. Hosted by the Georgetown Chimes, the Cherry Tree Massacre has become a university tradition, a piece of history that continues into the present for three weekends within the open doors of Healy this January and February.

With different sets of performers each night from Georgetown’s finest singers, this is the perfect opportunity to slip away from the cold winter nights and thaw yourself beside a collection of musical classics, favorites and a cappella twists.

Since its conception, the Chimes has hosted this show, the largest collegiate a cappella festival on the east coast.

“It was started by a neophyte of the Chimes who realized that the Chimes had this tremendous amount of debt incurred that they needed to pay on their bar tabs, and so they decided to have the Cherry Tree Massacre,” Chimes #243 Connor Joseph (COL ’16) said.

What began as a fun way to raise money for spirituous debt has since turned into one of the most important and loved traditions at Georgetown, a way to raise actual spirits and provide a short escape from the realities of papers and exams.

“Sometimes at Georgetown it can be really easy to get caught up in assignments and day-to-day tasks, and singing is a respite from that. There’s something transcendental about music, and it’s great that we can come out and escape from that really stressful Georgetown experience,” Joseph said.

The Cherry Tree Massacre is a chance to come together as a community and appreciate the immense talent that Georgetown has to offer. Nestled between the stained glass windows, with John Carroll keeping watch out front, these four shows will offer a shared connection for all students to a legacy that was created here on campus and has only grown with each passing decade.

To all involved, the show is far more than a one-way performance; it’s an interaction between the singers and the audience as they enjoy each other’s company and appreciate the wealth of creativity that thrives on the Hilltop.

“I’m always excited to see the audience’s reaction; I like putting a smile on people’s faces when it all comes together. It’s great to see that people are enjoying what we actually do, and to watch them clap and smile,” Chimes #238 Charlie Plissner (COL ’15), the Ephus, said.

The intimate setting and familiar faces already make this event special, but realizing that it has been going on long before any one of us crossed through those crested gates and stepped foot on campus is almost unbelievable. So what gives the Cherry Tree Massacre its ability to remain strong year after year?

It is the dedication of future Chimes that keeps this tradition alive and thriving in the heart of Georgetown.

Preparations for this year’s performances began as far back as November. The amount of work that has been going on behind the scenes for months, which includes the creation of set lists, in-house arrangements, budgeting and financing and, of course, resiliently tabling out in the freezing cold, is the Chimes’ way of ensuring the preservation of a past that is central to their identity and to the history of a cappella at Georgetown.

“It’s a commitment to the tradition and to the alumni before us. They’ve given a commitment to come back every year with their families to support us, and there’s still an entire section of Chimes in the top of Gaston, because no matter what there’s still a connection between us,” Chimes #245 Ben Manzione (SFS ’15), the business manager, said.

To honor such commitment and longstanding tradition, the last night of the Cherry Tree Massacre is known as the Alumni Show, and the performances will close with the present alumni and current Chimes sharing the stage. It’s a tribute to the group’s individual history, but also a promise that this annual performance under the glowing lights of Gaston’s chandeliers won’t stop any time soon.

“Music really is a way to communicate and express emotion; it might be one of the best ways to express emotion that people have. When you speak and have a conversation you can get a connection, but singing and music provides another dimension to that. When you say a picture is worth a thousand words, music is worth even more,” Manzione said.

With a set list as diverse as the one planned for this year’s event, including first-time performances by Georgetown GraceNotes and Georgetown R.E.L., as well as the Boston College Heightsmen and UNC Loreleis, there’s definitely something to be enjoyed for everyone attending.
Beyond being a tradition, Cherry Tree Massacre encompasses a history of friendship, of a large group of people coming together to celebrate what they love.

“If you’re downstairs at Leo’s a couple hours before the show, you might catch [the Chimes] there; we always get a team dinner at Leo’s right before the show. It helps us not lose sight of the fact that we’re putting on this show as friends first, before anything else,” Tim Lyons (COL ’15) said.