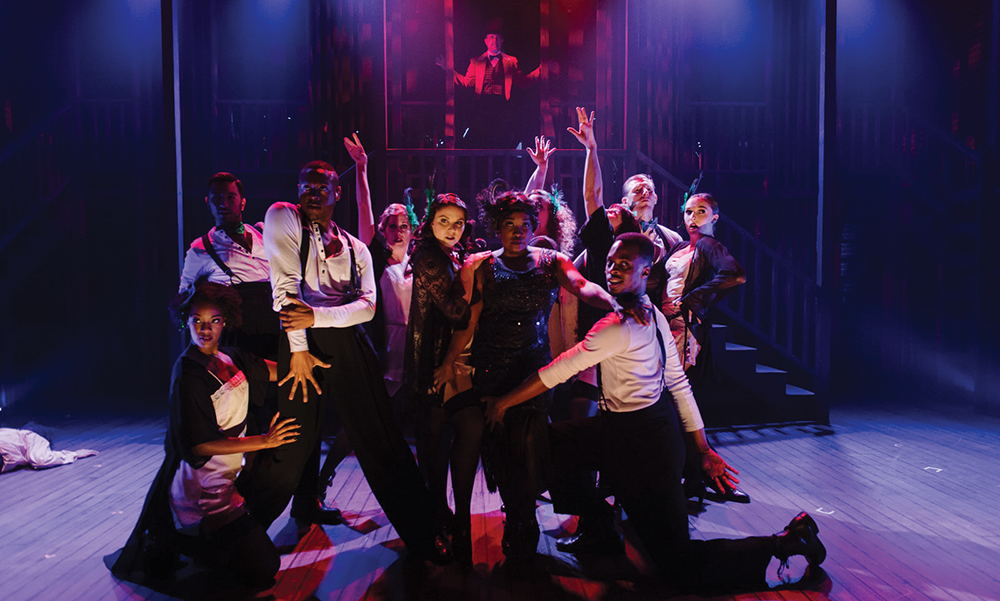 Clad in silky lingerie and fishnet tights, Velma Kelly, played by Jessica Bennett, opens the show with “Chicago” classic “All That Jazz.” Her smooth alto and sultry dance moves strikingly portray the unapologetic boldness of the iconic character. She exchanges quick kisses and flirtatious twirls with her accompanying male dancers, perfectly introducing the playfulness, high energy and mischief of “Chicago.”

On March 10, the American musical “Chicago,” directed by Susan Marie and Mark Rhea, came to Keegan Theatre, First performed in 1975, “Chicago” has won six Tony awards, one Grammy award and two Olivier Awards, and tells the story of a murderous seductress’ attempts to outwit the law and her rivals. The talented cast at the Keegan Theatre did more than live up to the musical’s legacy — they captivated audience members with their charismatic performances.

The show’s plot unravels quickly as the extramarital affair of Roxie, played by Maria Rizzo, goes south when her lover tries to leave her. As the situation deteriorates, the scene transitions into Roxie’s captivating performance of “Funny Honey.” Jumping between a range of emotions — fury, frustration and frenzy — Rizzo strikingly conveys Roxie’s overwhelming fear of incarceration. Throughout the show, Rizzo skillfully portrays Roxie’s growing hysteria, with frantic body clutches and subtle eye twitches reflecting her overwhelming hunger for fame.

During this number, the audience laughed along as Roxie mocks doe-eyed husband Amos, played by Michael Innocenti. Though he is initially portrayed as a stock character and a source comical relief, Innocenti successfully adds depth to Amos in his solo number “Mister Cellophane.” His slow, dragged-out voice creates an endearing and sympathetic performance as Amos solemnly despairs over being “invisible” and “inconsequential.”

Yet, lightheartedness is never far: Amos’ seeming invisibility is humorously reinforced when he asks the orchestra to play his exit music and is met with silence, eliciting a roar of laughter from the audience.
The actors use song and dance to highlight comical character interactions and witty quips. In one example, a tap dancer mockingly trots around Roxie as she metaphorically “tap dances” around asking her husband for money.

“Cell Block Tango” is undoubtedly a standout number with its dramatic musical backdrop and villainous themes. As Velma and the seven other murderesses sadistically recount how they end up in jail, the energetic beats of the orchestra’s drums, trumpets and trombones emphasize their deep scorn and fury.

Another noteworthy number, “When You’re Good to Mama,” features soulful deep tones from the prison’s matriarch Matron Mama Morton, played by Rikki Howie Lacewell. Amusing, boisterous and unapologetically self-serving, Mama quickly make the audience warm to her. Holding hands and gazing intensely at each other, she and Velma demonstrate their striking chemistry as they bemoan the society’s universal lack of etiquette in “Class.”

Billy Flynn, the murderesses’ lawyer, played by Kurt Boehm, comes out dancing from amid the audience in “All I Care About.” Though his entrance to the show lacks the level of energy and pizazz expected from this showbiz-crazed character, he becomes increasingly charming and believable with each cheeky wink to the crowd and suave dance move.

News reporter Mary Sunshine, played by Chris Rudy, is another fascinating character. Sweet and shrill, her theatrical persona is further emphasized by her platinum blond wig, overdrawn lipstick and smudged eyeshadow, all of which captivate the audience’s attention each time she appears on stage.
The hilarious, enchanting performance of “Razzle Dazzle” by Billy, Roxie and their dancers — filled with feathers, flapper dresses, sparkles and theatrics on every corner of the stage — encompasses the eccentricity of the Roaring Twenties era when “Chicago” is set.

Bennett is undoubtedly the star of the show, with sass and confidence pouring from her tasselled dresses and sparkly heels. She commanded the audience’s full attention with every number and often overshadowed Rizzo in their duets as a result of her powerhouse vocals and unbeatable energy.

In a charming final dance, donning tailcoats over their identical embellished dresses, Roxie and Velma skillfully balance top hats on their heads and twirl batons as they shimmy across the stage. The rest of the cast joins them for the finale, which includes an especially animated musical performance from the talented orchestra. Filling the theater with a potent energy and buzz, the show comes to a lively end with the same flair the ensemble has brought to the entire performance.