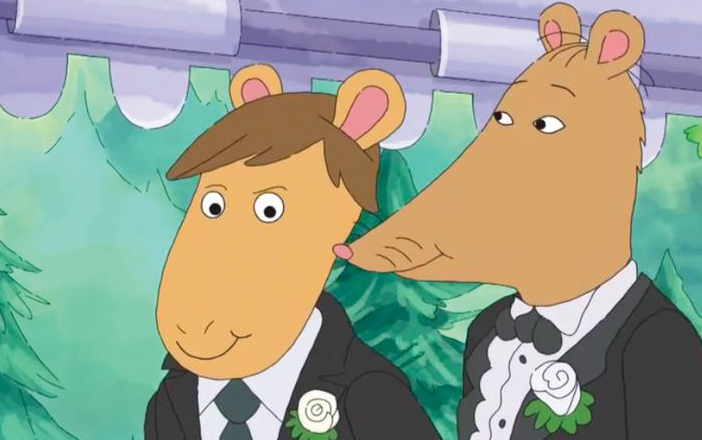 When ABC’s “Modern Family” introduced an LGBTQ family as a regular feature of the series 10 years ago and became one of the first shows on broadcast television to do so, only 3% of scripted characters on broadcast shows were LGBTQ. Since then, LGBTQ representation has grown and continues to grow, and the percentage of series regulars who identify as LGBTQ has reached an all-time high of 8.8% in the past year, according to a 2019 GLAAD report.

Next week, Netflix will mark another milestone for LGBTQ representation on the small screen, as the animated children’s series “She-Ra and the Princesses of Power” debuts its first nonbinary character, a shapeshifting mercenary named Double Trouble. “She-Ra” follows in the footsteps of several other children’s programs that have recently sought to diversify through the inclusion of openly gay characters and age-appropriate LGBTQ romances.

The recent uptick in LGBTQ representation in children’s entertainment signals an increasingly inclusive culture and media landscape. Nevertheless, a deficit remains in the representation of people of all marginalized groups with fairness and nuance.

Representation of LGBTQ people in popular media has advanced greatly over the past several years, in part because of a greater social acceptance of diverse network programming.

The last five years have seen an increase in LGBTQ representation in television and in the diversity of stories being told, according to April Sizemore-Barber, a professor in the women’s and gender studies program.

“Things have definitely improved in the past five years, especially, just measured on how many different representations and genres depict LGBTQ stories and how many different types of stories are told,” Sizemore-Barber wrote in an email to The Hoya.

Public response to LGBTQ representation in children’s media has generally improved but has historically been a flashpoint of disapproval. In 2005, PBS was met with backlash over an episode that was planned to air from “Postcards from Buster,” a spinoff of “Arthur.” In the episode, Arthur’s best friend Buster visits a diverse array of live-action families, including a lesbian couple. PBS decided not to air the episode from airing after then U.S. Secretary of Education Margaret Spellings requested PBS return public funds used for the episode.

Fourteen years later, however, the season 22 premiere of “Arthur” in early 2019 featured the same-sex wedding of Arthur’s teacher Mr. Ratburn and saw much more positive reception from the public, especially on social media. PBS-affiliate stations in Alabama and Arkansas, however, refused to air the episode, citing concerns that parents would not be aware of the episode’s content beforehand.

Along with Arthur’s inclusion of LGBTQ characters, other programs have also received acclaim for their treatment of LGBTQ storylines. Both “Steven Universe” and “Andi Mack” have received the GLAAD Media Award for Outstanding Kids & Family Programming, which recognizes media with particularly inclusive representations of the LGBTQ community.

“Steven Universe,” an animated program produced by Cartoon Network that began running in 2013, focuses on the adventures of a young boy named Steven and the all-female team of superhumans called the Crystal Gems.

Throughout its run, “Steven Universe” has depicted multiple lesbian romances, as well as a nonbinary character who uses they/them pronouns. In 2018, an episode of “Steven Universe” featured the wedding of Ruby and Sapphire, two of the show’s central female-presenting characters, becoming the first animated program in history to depict a queer wedding.

Such progress produces far-reaching effects for people both inside and outside of the LGBTQ community, according to Sizemore-Barber.

“Until very recently, LGBTQ people would look to media and not have any representation or would only have a negative stereotype to identify with,” Sizemore-Barber wrote. “This absence of stories leads to ignorance among members of the general public (who don’t see LGBTQ stories represented) and isolation for those who identify as LGBTQ and are implicitly told that they don’t exist.”

The lack of LGBTQ representation for children creates a struggle common to the LGBTQ community, according to Jenny Xu (COL ’21), communications director of Georgetown University Pride. (Full disclosure: Xu previously served as a member of The Hoya’s editorial board.)

“I questioned for so long, and it was such a difficult process of struggling with that within myself because I didn’t have any representation when I was younger,” Xu said. “I just thought it was wrong. If I never saw this, how could I be it, you know?”

Early exposure to media can significantly affect childhood development. Media is one of the primary ways children are informed about the world around them, and studies have estimated that children under the age of 8 spend an average of 2.25 hours immersed in digital media daily, a figure that only grows as technology becomes more ubiquitous, according to a 2017 report from Common Sense Media.

Children generally approach media in search of figures they can relate to, according to Sandra Calvert, a Georgetown psychology professor who specializes in children’s media exposure. As early as preschool, children may be sensitive to gender norms represented in the media they consume, Calvert said.

“Boys especially are looking for more boy-like characters, you know, who are adventurous and superheroes, and girls are a little less likely to only go for one gender as their favorite than boys are,” Calvert said in an interview with The Hoya. “This kind of shifts around ages three, four to becoming more gender stereotyped and where kids are looking for somebody like them.”

Media can strongly influence the development of identity and understanding of other people’s identities, according to Sizemore-Barber.

“From childhood, we are exposed to media that tells a particular type of (age-appropriate) story—think Disney movies and rom-coms—which normalizes particular relationships and identities,” Sizemore-Barber wrote.

The development of a healthy self-esteem and a strong sense of identity are closely tied to viewers’ ability to see people from their own backgrounds represented in a positive way, according to Sizemore-Barber.

“Wanting to see yourself represented and your stories told and affirmed is one of the most basic ways people come to understand their value and place in the world,” Sizemore-Barber wrote.

Public attitudes toward the LGBTQ community have evovled rapidly since “The Ellen DeGeneres Show” became the first broadcast television show to feature a gay series regular in 1997; many attribute this rise to the large increase in LGBTQ representation in popular media.

The increased positive representation of the LGBTQ community has the potential to affirm the existence of members’ identities and help audiences attain greater understanding of LGBTQ identities, according to Isabel Janovsky (COL ’23), a deputy of GU Pride.

“It would also help parents to come to terms with their kids being different from how they expect them to be. If you diversify children’s media — because parents also watch a lot of that — that’ll make it maybe seem like straight isn’t the only option,” Janovsky said.

While representation particularly in television has progressed greatly over the last several years, diversity in children’s media still has a ways to go. The stories children are told feature characters overwhelmingly white, cisgender and heterosexual, which can reinforce ideas that people who are not white and straight are not worthy of being talked about.

A 2017 study from Tufts found from a sample of 1,500 animated characters on children’s television that just 11.6% were Asian or Asian American, 5.6% were black and 1.4% were Hispanic or Latinx. The same study found that under one-third of characters in animated television are female.

A 2015 GLAAD report also found that, even as queer representation increased, the majority of queer characters on broadcast television were still white and male.

Although an increase in diverse representation is essential to creating parity in media, the quality of the representation also matters. LGBTQ storylines are still often stereotyped and used as plot devices, even in adult media, according to Sizmore-Barber.

“A few years ago it seemed like every show with a lesbian character killed her off, often to support the ‘growth/storyline’ of a straight male protagonist,” Sizemore-Barber wrote, referring to a trope that has commonly been referred to in pop culture as “Bury Your Gays.”

Bisexuality in particular is commonly handled without nuance and in ways that contribute to bisexual erasure, the notion that sexualities outside the binary of gay and straight do not exist, according to Sizemore-Barber.

“Bisexual women’s sexuality is still used as a titilating minor plot point,” Sizemore-Barber wrote. “Bisexual men are generally not portrayed at all or are portrayed as gay and in denial.”

Despite current flaws in LGTBQ representation, many shows have created complex queer characters whose identity is more than their queerness and who play substantial roles in narratives, which is an important milestone, according to Xu.

“That is a really great step because when you have the gay sidekick who just says a few funny lines — yeah, sure, that’s representation, but it still kind of makes a mockery of the identity; it still tokenizes the identity,” Xu said.

Representing LGBTQ characters who are important to the plot and who have identities outside of their sexuality is key to achieving parity in media, according to Xu.

“If people exist in our world, and people identify as LGBTQ, there’s more to them than that,” Xu said. “So that should be reflected in the media, and I’ve been seeing that in more and more shows and movies.”