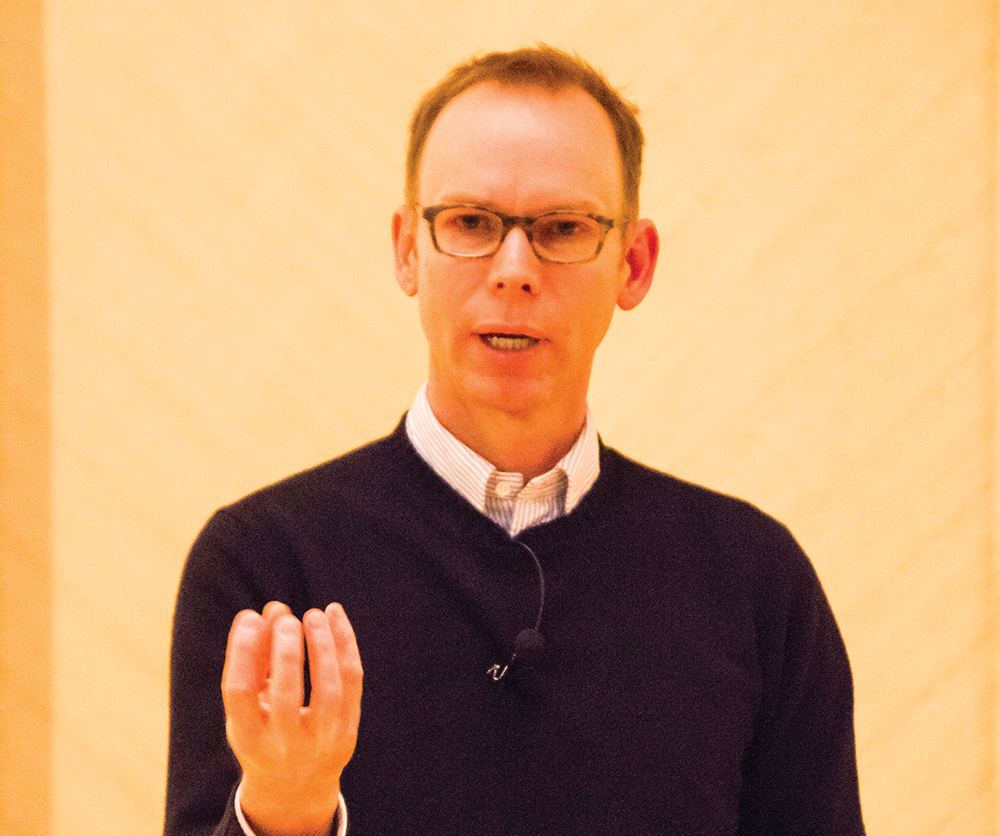 Steve Ells, the founder and CEO of Chipotle Mexican Grill, highlighted Tuesday evening in Lohrfink Auditorium the importance of changing the way people think about and eat fast food.

Throughout the event, sponsored by the McDonough School of Business and the Lecture Fund, Ells outlined the history of Chipotle, which he founded in 1993 after attending the Culinary Institute of America and working at Stars restaurant in San Francisco. While living in San Francisco, Ells frequented a taqueria where big burritos were served in tinfoil wrappers.

Originally, Ells desired to own a restaurant to make a quick profit. Today, Chipotle has over 1,500 locations in over 43 states, and every week four new Chipotle restaurants open. Ells did not anticipate the immense success of his spontaneous decision.

“I’m not a good planner. I didn’t have this grand vision for doing all these things in a very linear progression,” Ells said. “One thing that is a commonality in all of these decisions is that they felt like the right decisions.”

Chipotle made its name through its mission, which aims to change the way customers think about and eat fast food. Ells founded the restaurant with the hopes of providing a fast food service with fresh ingredients from sustainable sources and preparing the food in a natural, transparent way.

“Fast is not the problem with fast-food, it’s the food. It’s how the food is raised, how the food is processed, how it’s cooked, or not cooked, but re-thermalized,” Ells said.

Ells’ passion for selling a quality product led him to visit farms around the country, which inspired him to provide his customers with only the best tasting meat and best treated animals.

“The brutality in this confinement hog operation was really transformative for me. It was very, very uncomfortable, and I knew at that moment that I didn’t want my success or Chipotle’s success to be based on the kind of exploitation that I saw,” Ells said.

The emphasis on no exploitation of animals and all around transparency raised several questions about other ingredients on the Chipotle menu. Currently the company plans for all food to be free of genetically modified ingredients by the end of the year.

“The food with integrity journey is never going to be over. … [It is important] to people who are concerned with the environment and animal welfare, but also just concerned with the taste of their food and to have good taste and a fun restaurant experience without the kind of exploitation that goes on with a lot of fast-food places,” Ells said.

While Ells opened two new restaurants, ShopHouse, with four locations, and Pizzeria Locale, with two locations, his approach to dining throughout all remains similar.

However, the types of cuisine the new restaurants offer differ from Chipotle’s. ShopHouse borrows flavors from traditional cuisine in Southeast Asian countries, while Pizzeria Locale is not your typical pizza place.

“The first thing you see is this dough room with this big marble slab. We’re mixing flour and water and starter and salt–the four ingredients that should be in pizza dough,” Ells said. “[There are] beautiful California tomatoes and fresh mozzarella. … It then goes into a really special high temperature oven and two minutes later the pizza comes out.”

After Ells’ lecture, the floor opened to a question and answer session. One student asked Ells about President Barack Obama’s current push for an increase in minimum wage and the effect it would have on Chipotle employees.

“If minimum wage were raised, it would not negatively affect us perhaps like it would affect other people,” Ells said. “I think about opportunity more than minimum wage. I would rather give people an opportunity to avail themselves of leadership positions and positions that are a long-term career, and I think by offering this kind of thing you are attracting a higher caliber of person who is not going to stand for a minimum wage.”

Many students who attended the event felt pleasantly surprised that Chipotle emphasizes food with integrity. Many students enjoyed Ells lecture, as well as the free gift cards for one burrito and one ShopHouse bowl each attendee received. Some students even asked for Ells’ autograph, with Nick Oki (COL ’14) receiving a signature on his burrito.

“I didn’t know anything about the business or history of Chipotle before I went tonight, but the way he spoke about changing the reality of fast food culture really inspired me,” Jessika Brenin (COL ’17) said. “The business model of Chipotle is such a smart and effective way to both promote healthy, local food and motivate a thriving workplace environment.”

Chipotle’s focus on transparency with customers also resonated with students.

“I think it’s important to have transparency because we do live in a society where most of the food we get we don’t know where it comes from and where it’s made. … We get to see it made in front of us at Chipotle and it’s a step in the right direction to eating right,” Jake Maxmin (COL ’17) said.