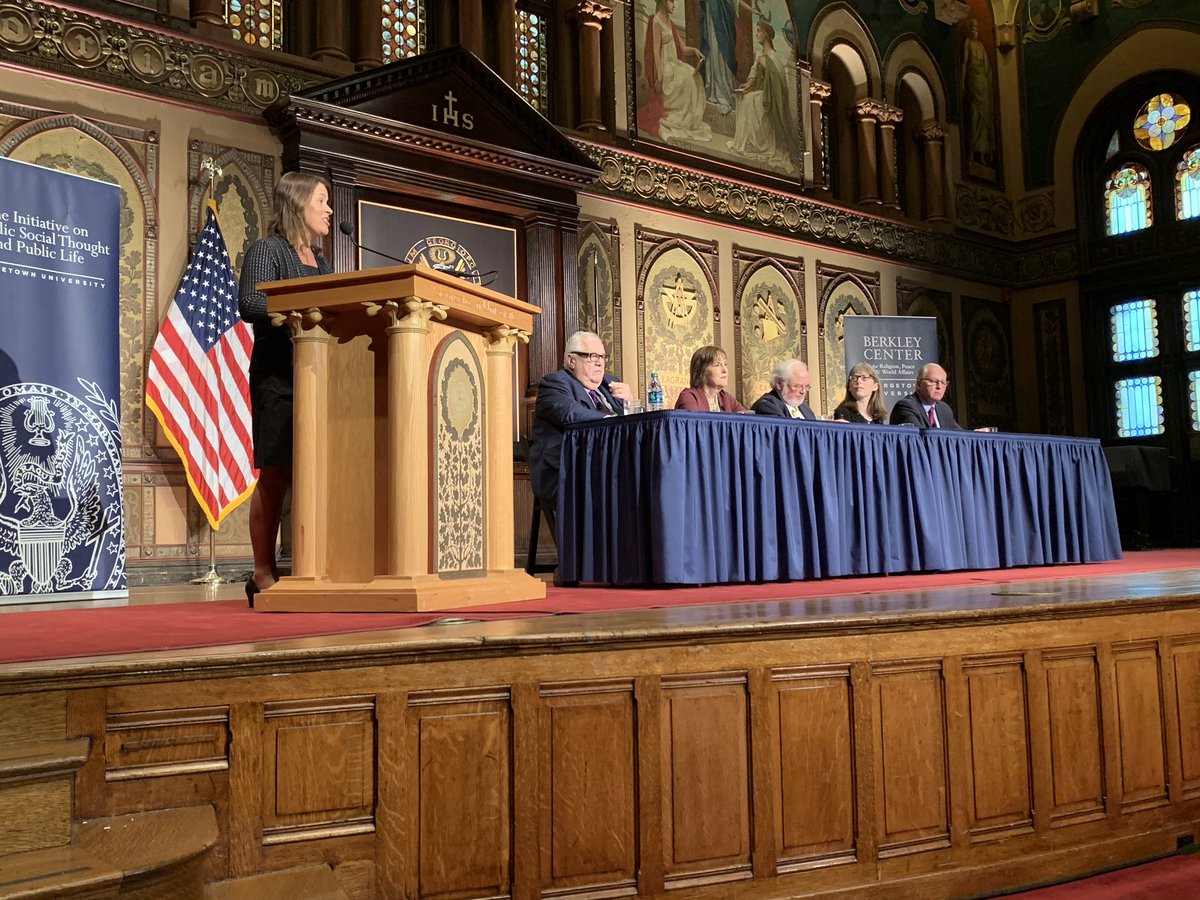 Catholic clergy cannot be trusted to initiate meaningful reforms combatting widespread clerical abuse, leaving the responsibility to lay people, former federal prosecutor and original member of the National Review Board for the Protection of Children and Young People Robert Bennett (CAS ’61, LAW ’64) said at an event in Gaston Hall on Tuesday.

The Initiative on Catholic Social Thought and Public Life hosted an event titled “Confronting a Moral Catastrophe: Lay Leadership, Catholic Social Teaching, and the Sexual Abuse Crisis,” at which Bennett sat on a panel of lay people, members of the church who are not clergy, sharing their reactions following revelations of clerical abuse this summer.

The panel also featured Kevin Byrnes, a former criminal trial attorney and survivor of clerical abuse; Karen Tumulty, a columnist for The Washington Post; and Dawn Eden Goldstein, a theologian. John Carr, director of the Initiative on Catholic Social Thought and Pubic Life, moderated the discussion.

Former Cardinal and Archbishop Emeritus of Washington, D.C. Theodore McCarrick resigned this summer amid mounting allegations of sexual misconduct, which an investigation by the Archdiocese of New York found credible. Less than a month after McCarrick’s resignation, a Pennsylvania grand jury report released in August detailed seven decades’ worth of sexual misconduct in Pennsylvania churches and the Catholic Church’s efforts to cover up the potential scandals.

Bennett said the leadership of the Catholic Church simply will not change unless it is forced to change.

“Until the laity takes on the hierarchy, there’s never ever going to be a change,” Bennett said. “What I found was an attitude on the part of the bishops of ‘Well, we’ve been around for a thousand years, and this too will pass.’”

Tumulty said that she does yet believe the church is even willing to take full responsibility at this time for the ‘moral catastrophe’ it has created.

“I’m just not sure yet that the leadership of the church is ready to, first of all, share power with the laity as much as they give lip service to that, and, second of all, really themselves confront the damage they have done to our church,” Tumulty said.

Bennett said the hierarchy of the church, especially in its higher levels, will protect itself against efforts to enact reforms necessary to stop clerical abuse.

“It’s a very selective men’s club, mostly all white, mostly old,” Bennett said. “They resist change. They have some sort of an inherent dislike of women, except for the blessed mother maybe.”

Tumulty said that she also doubts the ability of church leadership to handle the crisis but that she does not have faith the hierarchy will allow lay people to receive greater authority.

“I’m not sure that the church leadership is really going to do that because that means giving up power, which seems to be a very difficult thing to do,” Tumulty said.

Tumulty explained that frustration with the church stems in large part from its failure to take significant punitive action against abusers within the Catholic Church.

“Most lay people, they don’t want to hear about canon law, until we feel that the church is doing the first thing, which is dealing with the kind of law that puts people in jail,” Tumulty said.

Byrnes, speaking of his own experiences of clerical abuse, said it represented a massive betrayal of the faith.

“In Catholicism, we call our priests fathers,” Byrnes said. “Any father that will not protect his children or will abuse them has no right to wear a collar.”

Byrnes said it permanently altered his life, contributed to self-destructive behaviors and irrevocably damaged his faith.

“I’m just not sure I can convey to you what a horrible experience it is to wake up in the middle of the night, thinking one thought and one thought only from the Bible,” Byrnes said. “‘My God, my God, why have you forsaken me.’”

Still, Goldstein said she, a survivor of sexual abuse, converted to Catholicism believing both in its teaching and in the church’s ability to change.

Goldstein said she converted, despite the scandals, because she had faith in the church’s potential to grow.

“Only on the inside, with that faith and strengthened by the sacraments, could I be part of the solution,” she said.

Bennett echoed that change is not impossible, but that action must occur from outside the church hierarchy.