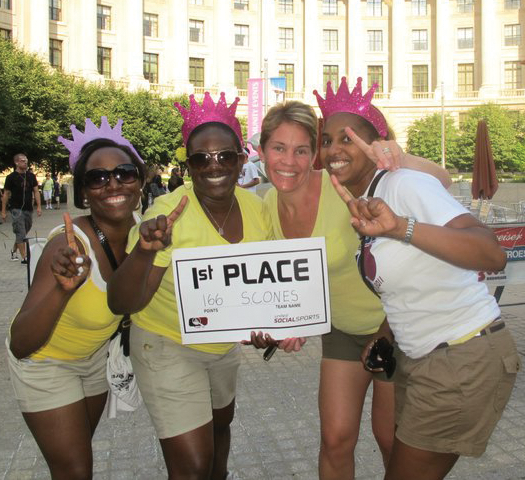 With the arrival of spring in Washington, D.C., come warm weather and the cherry blossoms — and this year, at least, Hunt D.C., the largest scavenger hunt in the city. Sponsored for the third time by United Social Sports, this event combines the best that D.C. has to offer with the added rush of travelling around the city, solving clues and competing with over 2,500 people for prizes.

“We’re hoping to take people sort of on a blind date with D.C.,” Casey Willis, the event organizer, said. “People are in the city every day, coming in for various things, but a lot of times, things that are right underneath your nose go unexplored, and so our goal is to get people out and about and exploring things that they may pass by on a daily basis.”

On Saturday, April 13, participants will have four hours to find as many items and visit as many of the 30 locations on the official Hunt list as possible, based on what they can figure out from the clues given.

Points are scored based on completion of tasks, of which teams notify Quizmasters — the people who created the Hunt — by uploading photos of themselves to a Hunt-specific software system.

“If we tell you to go to one location, once you get there you’ve got to do a certain task and take a picture of yourself or your team completing that task at the location, which is kind of fun,” Willis said. “So in real time, you can actually look at all the other contestants and change up your strategy based on what you see other people doing.”

Some of the clues are relatively easy, but many of them require originality and problem-solving skills.

Shank, who participated in the event last year, gave the example of having to take a picture with a man with a gun.

“Police weren’t allowed, [so] you had to be creative, to find a statue with a gun, take a picture with that or find different flyers,” he said.

Hunt D.C. aims to bring awareness to places off the beaten path that the Quizmasters think are worthy of more attention.

“I can’t give away the exact locations because that’s part of the fun,” Willis said, “but it will take you from anything from gyms and restaurants and parks to national monuments … or tourist locations that possibly you wouldn’t have known about previously.”

Participants can score additional points by wearing costumes on the day of the event or completing challenges when they arrive at a location. Activities range from trivia to spinning the wheel for prizes to karaoke.

“We’ve got all kinds of fun different challenges,” Willis said. “Our goal is to have each location be very different and have its own character and personality while sort of exposing people to different things the city has to offer.” The Hunt is unique in that many of the funds raised, including part of the registration fee, go toward local nonprofit organizations that reach out to Hunt D.C. or that the Quizmasters want to highlight.

“We are working with about a dozen nonprofits, so the goal for the event is that some of the stops that are on our hunt are actually different nonprofit associations,” Willis said. “We try to do all we can to build awareness that they’re right here and definitely worth exploring and visiting.”

Although this year’s nonprofits are a secret, Hunt D.C. has previously worked with Move for Hunger, a D.C.-based organization that delivers unwanted and non-perishable food items to food banks from people who are moving. Last year, participants visited a rooftop garden that Bread for the City, an organization that provides D.C. residents in need with such resources as food and medical care, built to promote dialogue about food justice in Washington.

The nonprofits, as well as the other locations, are spaced out throughout D.C., including a few in Georgetown.

“A couple of things might take you into the Georgetown area, which would be kind of cool,” Shank said. “[Georgetown students] might know about that ahead of time, or, being in that area, they might know a clue a little bit quicker.”

Because the locations are so well-spread throughout the city, participants can use any form of public transportation to travel around as quickly and efficiently as possible.

“This time, we’re going to have a little bit more of a destination appeal to it — we’re going to have it scattered all throughout the city,” Shank said. “We’re allowing you to use the Metro … and stuff like that so you can get to places faster [and] find more clues [so] people learn how to get around in a different way that they might not have known.”

Hunt D.C. is one of the many events organized by United Social Sports, which primarily sponsors casual social sports leagues for adults in the Washington area, ranging from shuffleboard to sand volleyball. The idea for Hunt D.C. originated four years ago with the owner of the company, Robert Albrecht, after his experience with other scavenger hunts in the area.

“A lot of those other scavenger hunts tend to have one overall winner and it becomes just a race to the finish, rather than a fun activity or something [that allows you] to … take your time [and] have fun with some people,” Shank said. “[Albrecht] thought that there was a way to make scavenger hunts that would be more inclusive to allow everybody getting a chance to have fun and everybody to have an opportunity to win.”

At Georgetown, the Big Hunt operates in a similar spirit to Hunt D.C. The Big Hunt, which held its seventh event last October, aims to get freshmen and transfer students acquainted with the city.

“Your first month on campus is spent trying to find your way around and get accustomed to the area. After that month though, you are so used to Georgetown that you never leave,” Amanda Wynter (COL ’14), the chair of the fall 2012 event, said in an email. “The Big Hunt forces you to get on the metro/bus/take a cab to those places that you only hear upperclassmen talk about.”

For the Big Hunt, points are awarded for visiting destinations, answering questions and completing additional tasks. Much like Hunt D.C., the accumulation of these points determines the winner.

“The beautiful thing about the Hunt … is that everyone gets a prize. We fundraise and get donations of over $5,000 every year to buy prizes like basketball tickets or dinner at 1789,” Wynter said. “Everyone, down to the last-place team, gets an awesome prize, along with their newly found knowledge of the district.”

The Big Hunt itself is so popular that the Georgetown Program Board is sponsoring an “Amazing Race: Monuments Edition” on April 13. This year, Georgetown Day will also feature a scavenger hunt for everyone — not just freshmen.

“The Georgetown Day Scavenger Hunt will take place all within campus,” Georgetown Day Chair Andi DeBellis (MSB ’14) said in an email. “Tasks will be obscure and fun and incorporate the list of the 101 Things You Should Do While on the Hilltop.”

Much like Hunt D.C., all teams have the chance to win this hunt. “It’s going to be based on a point system. The list is going to be extensive, so it’s going to be a who-can-get-the-most-tasks-done sort of deal,” DeBellis said. “Proof of task completion will be submitted by tweeting a photo.”

The popularity of scavenger hunts in the District can be attributed to the size and diversity of the city, according to Wynter.

“D.C. is many things: beautiful, historical, lively — but most of all, it is huge. Well, it is not that big, but it covers a lot more ground than many people ever know,” she said. “There are so many different neighborhoods with different personalities and different vibes. D.C. is perfect because you can tailor a scavenger hunt to the various neighborhoods and really treat them as separate ‘destinations’ instead of one uniform area where you run around searching for the same kinds of things, as on typical scavenger hunts.”

Shank, who participated in Hunt D.C. last summer, spoke highly of his experience.

“We had a chance to do it on a beautiful day, got to interact with a number of different people, got to meet a lot of different teams and people on those teams,” he said. “It’s really entertaining to rush around [and] go to different parts of the city… [and] we actually learned a few things about D.C.”

For this year’s Hunt D.C., teams of at least two can register on the United Social Sports website, https://unitedsocialsports.com/huntdc/register. The registration fee is usually $59 per person, but, using the promo code “GHunt,” Georgetown students can save $20 off the price. The registration fee includes a T-shirt, the possibility of winning prizes and a ticket to the afterparty downtown.

The only other requirements are a creative team name and at least one member who is 21 to complete challenges requiring entry into bars.

“It’s really going to be an all-around good time, and there’s going to be a ton of people out there,” Shank said. “It’ll be a great way to meet people and get out into the city.”