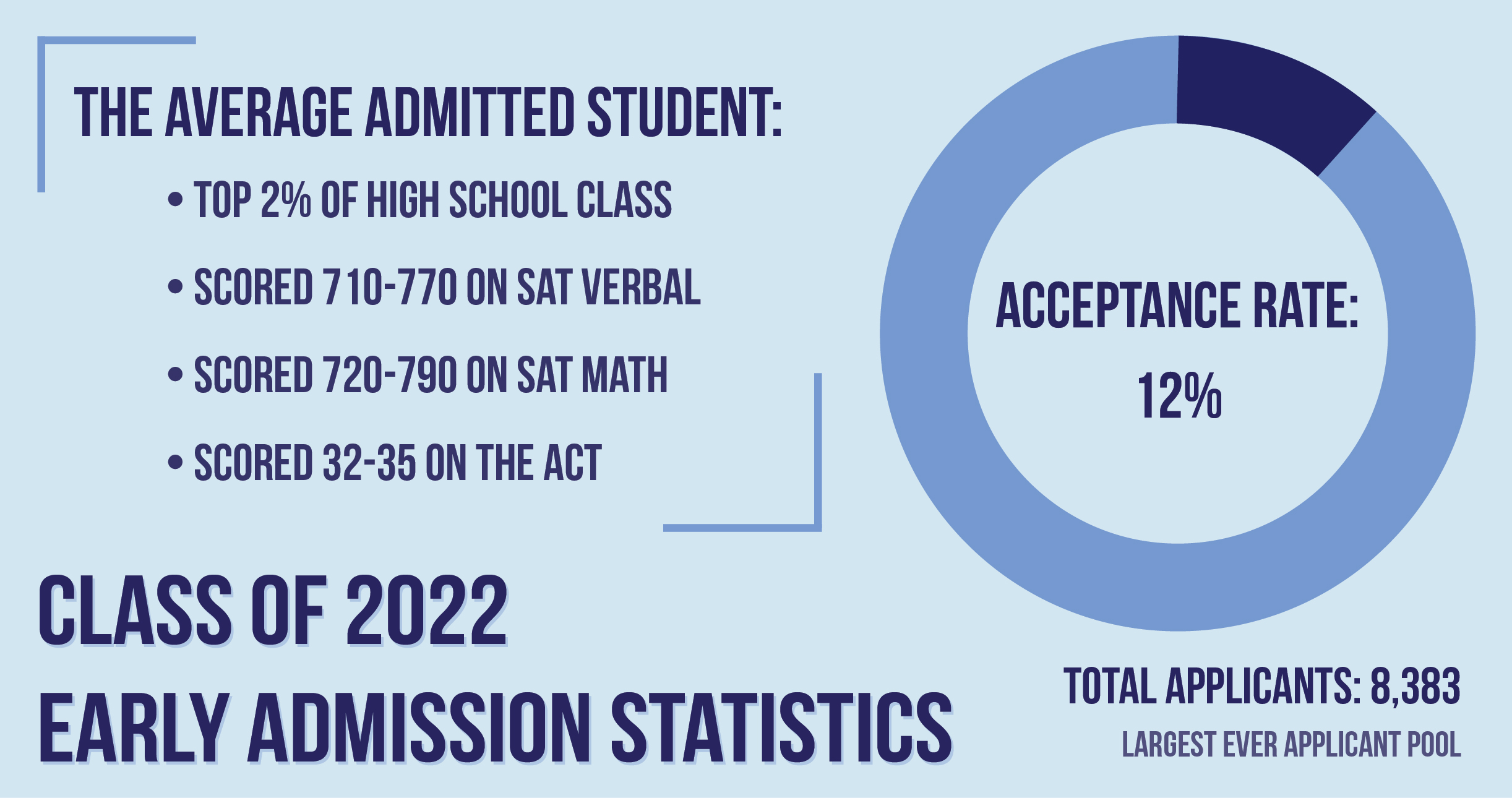 This year’s early action applicant pool was Georgetown’s largest ever, leading to an early action acceptance rate of 12 percent — a near-historic low — for the second consecutive year.

Georgetown admitted 1,002 of 8,383 early applicants to the Class of 2022, according to records provided by Dean of Undergraduate Admissions Charles Deacon (CAS ’64, GRD ’69). As the last of this year’s response letters arrive at applicants’ homes this week, the early admissions data show a two-year surge in applicants for reasons unexplained except by conjecture.

The Class of 2022 early applicant pool was 67 percent white, 10 percent black, 15 percent Asian-American and 11 percent Hispanic or Latinx, rates comparable to the previous year. Some applicants identified themselves by two or more races and are counted in more than one category.

Admitted students came from 49 states — all except Idaho — and the District of Columbia, as well as Puerto Rico and the Virgin Islands despite Hurricanes Irma and Maria ravaging the Caribbean islands in September. The university also admitted students from 39 foreign countries.

The state with the most applicants was California, followed by New York, Maryland and New Jersey.

The application pool was not only the largest, but also one of the highest-achieving, according to Deacon: The average admitted student was in the top 2 percent of their high school class with SAT scores ranging from 710-770 in reading and 720-790 in math.

If the regular application pool mirrors the trends in early action as it has in past years, the Class of 2022 is on track to be among the most selective in the university’s history, with the largest overall application pool and one of the lowest acceptance rates. The 15.4 percent overall acceptance rate into the Class of 2021 was the lowest ever and a full percentage point lower than the previous six years.

All but one of Georgetown’s four undergraduate schools saw an increase in applications compared to last year: Applications increased to 4,765 from 4,415 to the College, to 1,717 from 1,618 to the School of Foreign Service and to 652 from 526 to the School of Nursing and Health Studies. After a relatively modest increase in 2016, applications to the McDonough School of Business levelled off in 2017, decreasing slightly to 1,253 from 1,263.

Application numbers had been relatively stable at around 6,700 to 7,000 for at least five years until the dramatic spikes in 2016 and 2017. The reasons for the recent surge are unclear, according to Deacon.

“It’s really hard to pinpoint precisely why. We haven’t done anything unusual to make that happen,” Deacon said.

Deacon suggested that Georgetown’s location in the nation’s capital and its popular programs in government, public policy and foreign service may be heightening its appeal in a politically galvanized climate following President Donald Trump’s election.

External factors tend to correspond with the number of applicants to each of Georgetown’s undergraduate schools, according to Deacon. For example, SFS applications slowed in the 1990s after the end of the Cold War eased tensions in international affairs. Meanwhile, applications to the MSB boomed in the 1990s with the expansion of global business, then rose and fell during the 2000s alongside major trends in the stock market.

Many prospective students have, according to Deacon, evidently been inspired by recent dramatic political shifts to try to “make a difference in the world,” even as opportunities in public service appear less promising to some. Many applicants’ essays, for example, alluded to intense political debates over climate change, immigration, diplomacy and the role of the United States in international affairs, according to Deacon.

“Particularly in the last two years there’s been an awful lot going on in the political world, and there’s been this question of what are millennials going to do,” Deacon said. “In many ways, I think some of the things in the last few years have been a wake-up call, particularly recently as people may need to be thinking about public service again or even running for office.”

Yet, while application rates spiked in nearly every demographic group over the last two years, they have stagnated among non-U.S. citizens, a group that includes many international students. Compared to 565 last year, 539 non-citizens applied this year. Deacon said the more tepid interest among non-citizen international students parallels a global decline in favorable views toward the United States.

The non-U.S. citizen group also includes “Dreamers,” immigrants without documentation brought to the United States as children. “Dreamers” were protected from deportation under the Obama-era Deferred Action for Childhood Arrivals executive program until it was rescinded by the Trump administration in September.

Georgetown administrators, including University President John J. DeGioia, have lobbied extensively over the last three months for a legislative replacement to maintain protections for DACA students.

While the application numbers indicate Georgetown’s “brand” is strong and strengthening, Deacon said the university is not seeking to maximize applications or tout a lower acceptance rate. The university still does not use the Common Application platform, which streamlines the application process for students applying to multiple colleges, to dissuade less-interested students from applying.

If application numbers continue to climb, the university may have to consider hiring non-Georgetown staff to read applications, a move it has resisted so far.

“It’s not something we’re pushing, because we don’t want to have to be a bigger admissions staff than we already are. As the pool grows, somebody’s got to read the applications,” Deacon said. “We’re happy it’s going up, but we’re not aiming for 25,000 or anything.”