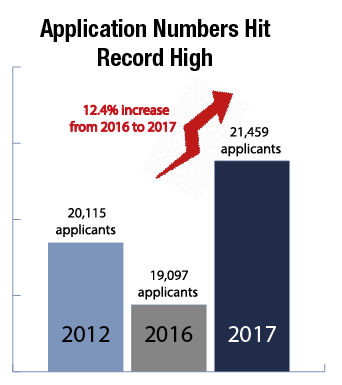 After receiving a record number of total applicants for this year’s application cycle, Georgetown’s admissions department anticipates accepting about 15 percent of 21,459 regular decision applicants to the Class of 2021, down from last year’s acceptance rate of 16.4 percent.

Georgetown accepted a record-low number of early action applicants this year, down to 11.9 percent of the 7,822 applicants from last year’s 13 percent.

This increase is expected to reduce the number of transfer students accepted this year from 170 to 150 admits.

According to Dean of Undergraduate Admissions Charles Deacon (CAS ’64, GRD ’69), the incoming freshman class is expected to increase slightly from 1,580 to 1,600 students.

Deacon said based on the 1600 SAT score scale, the average critical reading score and math score for the applicant pool rose by about 16 points, translating to a more competitive applicant pool.

The number of first-generation college students who submitted regular decision applications increased this year, making up 11 to 12 percent of total applications.

The Office of Undergraduate Admissions plans to send out decisions for the regular decision cycle beginning the week of March 27 for applicants to receive their letters by April 1.

Deacon said the College received a bump in applicants, while the number of prospective students in the School of Foreign Service, the McDonough School of Business and the School of Nursing and Health Studies remained similar to last year. Deacon was unable to provide specific numbers as of press time.

According to Deacon, these trends suggest a greater interest in the liberal arts and an improving job market.

“The trend that had people going toward business or the [School of Nursing and Health Studies], which gives you a concrete outcome with a job — maybe people are getting less worried about getting a job on that end and more worried about following their academic interests,” Deacon said. “It’s a good sign for the liberal arts that people are going back to it.”

Deacon noted the role of the Georgetown Scholarship Program as a contributing factor of the rising number of first generation students submitting applications.

“We have the GSP program, which is a great program. We don’t recruit for that — people get invited to join from the admissions committee selecting people they think would be good for it,” Deacon said. “But the word of mouth is out about it, which holds up our first-gen, lower-income pool.”

Deacon said this change in admissions rates reflects a trade-off between the number of incoming freshmen and transfer students admitted.

“We’re taking slightly more freshmen and slightly fewer transfers, which is what the deans want because the freshmen [class] is the strongest pool already,” Deacon said. “We still have a good transfer pool, which comes in April.”

Deacon also said the increased number of first-generation students is a positive sign for socio-economic diversity, though it foreshadows competition between elite schools to retain these students.

“For us, with first-gen kids, the problem is, with all the socio-economic circumstances of their lives, not that high of a percentage have the academic record that puts them in a range for a school like a Georgetown or an Ivy League school,” Deacon said. “Essentially, a number of the most competitive schools are sort of competing for the same pretty small pool of people with a sufficiently strong background.”

Deacon also indicated the various factors behind the high number of applications, such as the new SAT exam, Georgetown’s independent application system, an increase in the number of high school graduates applying to colleges, the national political climate and Georgetown’s location, which all bolster the university’s brand.

“Washington, D.C., is an interesting place to be, particularly in a political year. President Trump wanted to drain the swamp, but he filled it back up with everybody,” Deacon said. “Washington is a political power center, as opposed to a financial one, or an entrepreneurial one. It’s a political power site.”

The 2016-17 admissions cycle was the first to use the new SAT format, which transitioned back to the 1600-point scale from the previous 2400-point scale and was administered for the first time in March 2016.

The change did not affect the way Georgetown analyzes standardized test scores, since the admissions committee only calculates the combined critical reading and math scores. However, Deacon said the College Board, the organization that administers the SAT, has suggested there might be more students scoring higher than they would have on the old test.

Deacon said this trend could have hurt students who preferred to submit ACT scores instead of the new SAT scores they received because they considered it to look more impressive.

“A lot of people are advised by their high school counselors maybe to take the ACT, which we don’t think is great advice, because the ACT was unchanged but the SAT came out higher, so that could have had an impact,” Deacon said.

“Almost all of the increase was from people who are in the top 10 percent of their high school class. What you see going on there is that as you become more competitive, people begin to weed themselves out. People with lower scores say, ‘Why bother?’ If they are high, they say, ‘Maybe this is a school I should be applying for,’” Deacon said.

Deacon also said that despite the men’s basketball team’s performance this year, the university’s reputation is growing and attracting more students.

“Put basketball aside,” Deacon said. “The Georgetown brand has been stronger and stronger.”