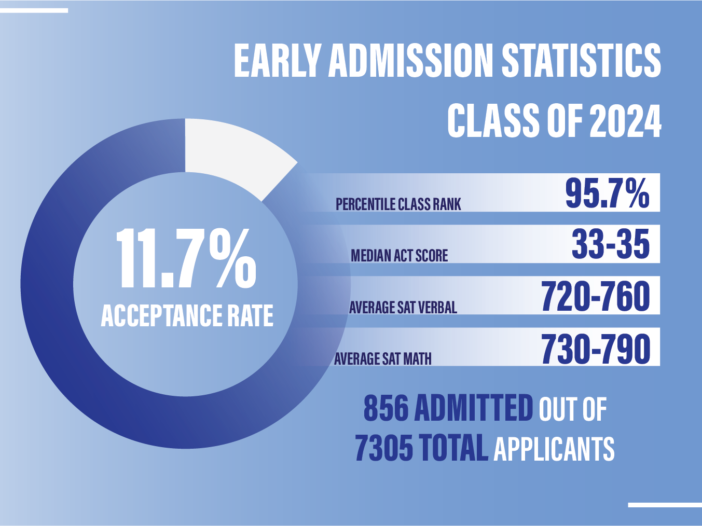 Georgetown University offered admission to 11.72% of early action Class of 2024 applicants, a record low despite the number of applications falling for the second year in a row.

Georgetown accepted 856 students from an applicant pool of 7,305, a 6% decrease from last year’s 7,802 applicants. Early action applicants were notified by mail with either an acceptance or deferral to regular decision Dec. 15.

The College may appeal to potential applicants due to its curricular flexibility, offering the largest selection of majors out of the four schools, according to College Vice Dean Sue Lorenson.

“It doesn’t surprise me that the College has the lowest admit rate,” Lorenson wrote in an email to The Hoya. “For many students, parents, and high school counselors, when they think about ‘Georgetown,’ they’re really thinking about Georgetown College.”

“We see this as a larger reflection on the continued pressure many applicants are feeling to commit to an Early Decision school, as opposed to a reflection on interest in Georgetown,” Deacon wrote in a letter to The Hoya.

Boston College and the University of Virginia both adopted an early decision program for the first time this admissions cycle. BC and UVA are two of Georgetown’s significant overlap institutions, according to Deacon.

Early action rates have hovered around 12% for the past four years, while the general admissions rate, in its most competitive year, was 14%. The admission rate for early action is purposely kept lower than the general rate to give regular decision applicants a fair chance, Deacon said in an interview with The Hoya.

“We keep the early rate below the overall rate so that we don’t over-admit from the early pool,” Deacon said. “The early pool historically is a little bit more affluent and a little bit more majority students, because students who are lower income, students of color, are usually later in the game, so the larger pool will come later during regular decision.”

This year’s application pool continued to see a growth in applicants from minority groups. Twelve percent of the applicants self-identified as Black/African-American, 14% as Hispanic/Latinx, 20% as Asian-American and 1% as Native American.

Admitted students came from 49 states and 31 countries. The state from which the most applications came was California, followed by Maryland and New York.

The university has continued to offer a non-binding early action program over single-choice early action and early decision alternatives in order to not restrict a student’s options, Deacon said.

“We don’t think that helps anyone, because you can only pick one school,” Deacon said. “That means you only get one financial aid reward, and you have to accept that, and we’ve not felt that was a good plan. You’re only going to get one offer, and it’s not going to be a particularly generous one.”