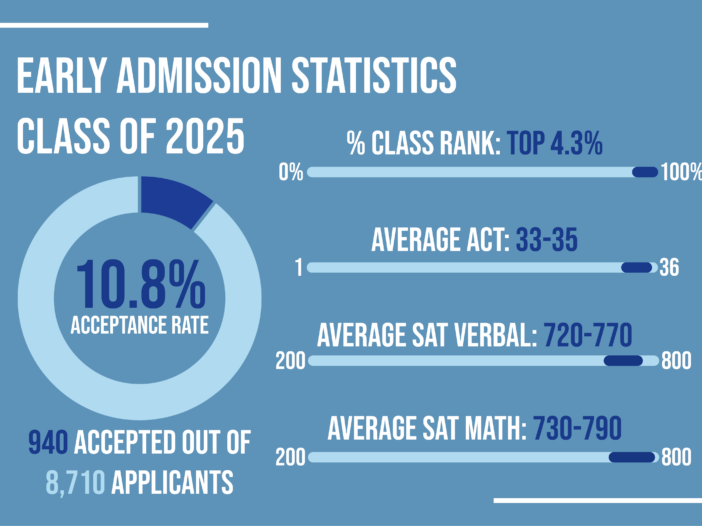 Georgetown University accepted early action applicants for the undergraduate Class of 2025 at a record low admission rate, with a nearly 20% increase in applications from last year.

The university admitted 940 students from a pool of 8,710 applicants at a 10.79% acceptance rate. The number of applications saw a 19% increase from last year, according to Dean of Undergraduate Admissions Charles Deacon (CAS ’64, GRD ’69). Early action applicants were notified of their decisions Dec. 13 when letters were posted to students’ online admission portals.

This year’s increase in applications may be a result of new online college admissions resources and Georgetown’s global name recognition, according to Deacon.

“No matter where in the U.S. you are or around the world, you know about Georgetown,” Deacon said in an interview with The Hoya. “I think that there was a large pool of people who may not have had that normal access, you know, who went online and virtually to schools they knew about.”

“The early pool tends to be more of the ‘haves’ as opposed to the ‘have-nots.’ First-gen and low-income kids tend to apply later and so we don’t want to give away a disproportionate number of spaces early,” Deacon said.

The enrollment cap for the Class of 2025 is 1,600 students. In addition to considering demographic differences between application pools, the Office of Undergraduate Admissions must take into account spots reserved for students who chose to defer matriculation. Approximately 115 students who were admitted as part of the Class of 2024 decided to defer enrollment until fall 2021, according to Deacon.

For the first time, the admissions office offered a flexible standardized testing requirement in which students were asked to submit ACT or SAT scores but were still considered for admission if they were unable to submit scores because of complications related to the COVID-19 pandemic. Of the early action pool, only 7.34% of applicants who did not submit standardized test scores were admitted.

Deacon said the increased volume of applications for the Class of 2025 may require his office to admit fewer transfer students as opposed to reducing the number of spots available for incoming first-year students.

“If the numbers are an issue, probably the transfer numbers are more likely to be impacted than the freshman number,” Deacon said. “We really feel it’s important to keep a steady first-year class coming in.”

The admissions office made several changes to its operating procedures to help accommodate student needs during the pandemic, according to Deacon. Georgetown offered daily virtual information sessions to applicants and made virtual recruiting visits to high schools, while Georgetown graduate interviews were also conducted via video call.

Deacon said the virtual environment allowed Georgetown to conduct outreach to students of color, first-generation and low-income students despite the increased difficulty of applying to college during a pandemic. The admissions office created several new internet resources, including a website and student panels, to provide a glimpse into the student experience.

“A lot of those things we actually did because we could do them virtually and we’d never tried to do that in person because you would have to bring people to campus,” Deacon said.

The number of admitted students who are Black, Hispanic/Latinx and Asian American and Pacific Islander all increased from last year’s early action cycle, according to Deacon.

“One thing that we’ve been most happy about is, to a fairly significant degree, the number of applicants, even in all of the issues we’re facing, did hold up among students of color and first-gen, and actually increases even there as well,” Deacon said.

However, according to Deacon, the number of first-generation and low-income students who filled out the Free Application for Federal Student Aid this year has decreased from past admission cycles.

Some of this year’s virtual programming will continue in application cycles after the pandemic, according to Deacon.

“We will merge virtuals and kind of meetings into our regular activities starting next fall,” Deacon said. “So we’ll continue the interpersonal work but enhance it by putting these virtual things in its place.”

This article was updated Dec. 31 to clarify the description of admission statistics.