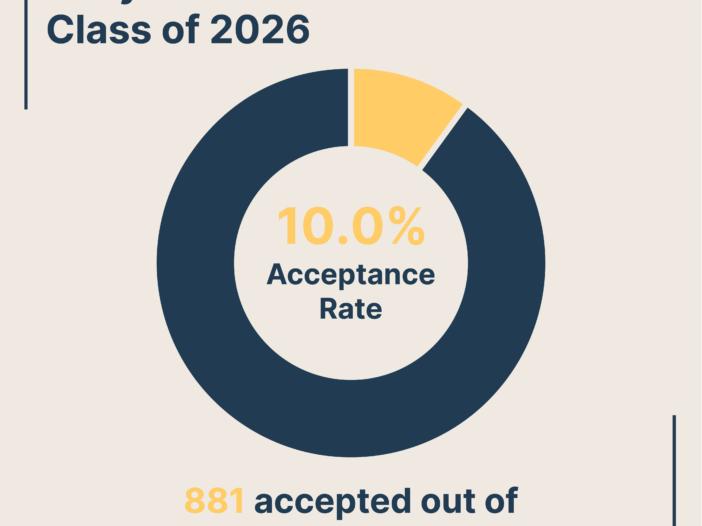 The university admitted 881 students from a total of 8,832 applicants for an early action acceptance rate of 10%, according to Dean of Undergraduate Admissions Charles Deacon (CAS ’64, GRD ’69). The number of applications increased by 1.4% from last year, while the acceptance rate dropped by .79%. Applicants received a notification of their application result via an online portal Dec. 13.

The university expected to see a large number of early action applicants, considering the increasingly competitive nature of college admissions in recent application cycles, according to Deacon.

“The general belief is that more seniors would apply early this year since the admit rates at the most selective colleges were so low,” Deacon wrote in an email to The Hoya. “Right now, our overall applicant pool is about 5% behind last year’s record increase which confirms that thought.”

The increase in early action applicants is likely due to the university’s offering of tours for prospective students throughout the summer and fall, according to Deacon.

“The only other noticeable trend is that many of the selective schools (Ivy, etc) have not welcomed high school visitors to campus this year while we have done so since late June,” Deacon wrote.

Despite the increase in early action applicants, the growth this year was more modest than last year, in which the overall applicant pool increased by 30%, according to Deacon.

Admitted students hail from 49 U.S. states, Washington, D.C., Puerto Rico and 28 other countries, and the states with the most applicants were California with 920 applicants, New York with 692 applicants and New Jersey with 652 applicants, according to Deacon.

The percentage of admitted students who are Black, Hispanic/Latinx, Asian, Native American, Native Hawaiian or Pacific Islander increased from 44.4% last year to 45% for the class of 2026 early action cycle, according to Drew Allen, associate vice president of Institutional Data Analytics in the Office of Assessment and Decision Support.

The university admitted 8.4% of all first-generation applicants, students whose parents do not have bachelor’s degrees, who applied during the early action cycle, according to Deacon.

While 75% of four-year colleges and universities decided to make standardized tests optional for this year’s admissions cycle, Georgetown retained its application testing policies.

Standardized test results must be submitted as part of the application, according to Deacon.

“We are requiring either the ACT or SAT this year and will continue to do so as the test becomes readily available again,” Deacon wrote. “SAT subject tests are no longer offered but we welcome, but do not require, students to send us whatever AP results they have instead.”

The number of applicants at highly selective schools increased significantly throughout the COVID-19 pandemic, and Georgetown is no exception, according to Deacon.

“We are 25-30% higher than two years ago which is a surprise given that the high school graduation pool has not grown,” Deacon wrote. “It appears that the biggest brand name schools are doing well in this new environment while the rest not so much.”