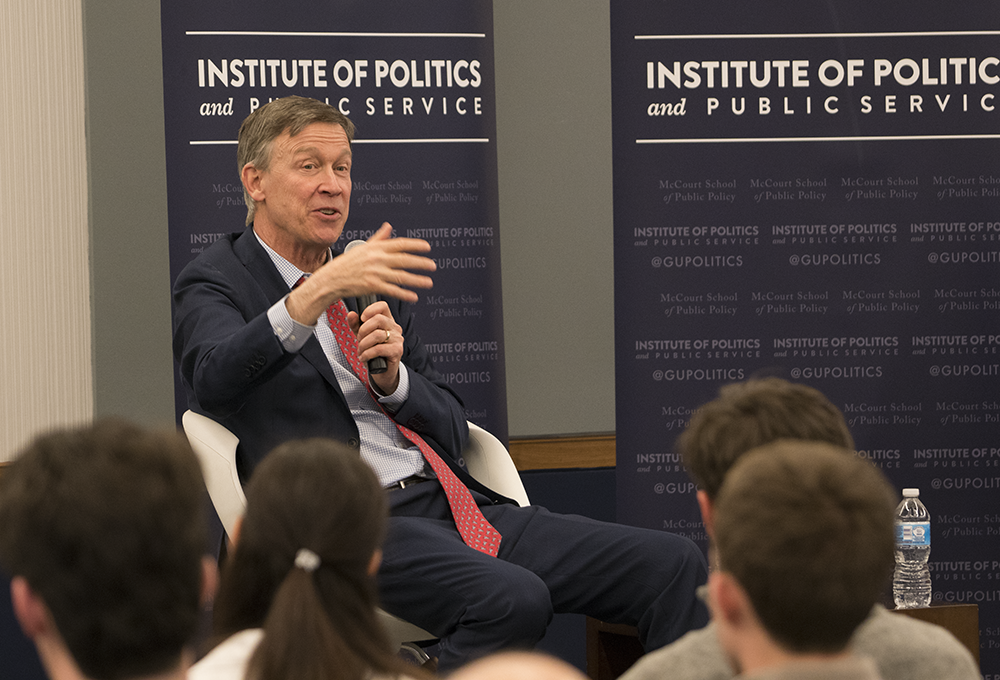 Colorado’s positive political climate should serve as an example to national politicians who rely on negative and combative rhetoric during their campaigns, according to Gov. John Hickenlooper (D-Colo.) at an April 5 event, “The Possibility of Politics: A Conversation With Governor John Hickenlooper.”

The event, which was hosted by the Institute of Politics and Public Service, featured a conversation between Hickenlooper and moderator Jackie Kucinich, Washington bureau chief for The Daily Beast and a former fellow for GU Politics. Previously a geologist and entrepreneur, Hickenlooper began his political career when he became the governor of Colorado in 2011.

Hickenlooper discussed campaign advertisements that attack the other candidates, saying they ultimately negatively affect the nature of politics in the country, which is especially prevalent in today’s political climate.

Hickenlooper said that the use of negative ads encourages ad consumers to pay less attention to politics, as the negative rhetoric clouds the message of the politicians who are running.

“Those attack ads make people just tune out, and not read the newspapers, not pay attention to podcasts, not get involved in the details of policy,” Hickenlooper said. “American democracy is the best form of government that has been invented yet, but also one of the most fragile forms.  It’s completely dependent on people listening to each other and getting involved in the real issues of the day.”

Hickenlooper drew on the political campaign climate in Colorado, which employs consensus-oriented strategies to govern, to show the positive impacts that ads of this nature can have. Hickenlooper cited a 2004 sales tax increase in metropolitan Denver to highlight the cooperative nature of Colorado’s politics.

“In this metropolitan area, 34 municipalities, every single mayor — Republican and Democrat — all 34 unanimously supported the four-tenths of a percent sales tax increase,” Hickenlooper said. “Try to imagine that happening almost anywhere else.”

Hickenlooper described his efforts to bring Colorado’s spirit of cooperation to the national political stage in his 2017 partnership with John Kasich (R-Ohio). The pair led a bipartisan task force of governors that sought to halt Republican efforts in 2017 to repeal the Affordable Care Act.

“We needed a Republican governor, and we needed to sit down and find a bipartisan set of compromises that we could both agree on that would stand the test, that we could go out publicly and say, ‘Here’s what we’re both willing to live with,’” Hickenlooper said.

The Republican Kasich and Democrat Hickenlooper even considered entering the 2016 presidential election on a “unity ticket,” demonstrating an alliance of candidates that have different political ideologies. The idea was ultimately discarded because of concerns over how practical the ticket would be.

“In terms of real political possibilities, it just won’t happen,” Hickenlooper said, referring to the prospect of a two-party ticket.

Hickenlooper, who was an entrepreneur in the brewing industry before entering politics, joked that to fix the divisive quality of today’s national politics, every major politician should be required to work in the fast-paced world of the restaurant industry to learn the value of collaboration.

“When you’re in a restaurant and you’re in the weeds, when there’s a big rush and people can’t get the food out of the kitchen fast enough, you learn that it doesn’t matter whether you’re tall or short, black or white, straight or gay — everybody’s a part of the team,” Hickenlooper said “Everybody’s the same. Everybody is equally valuable.”