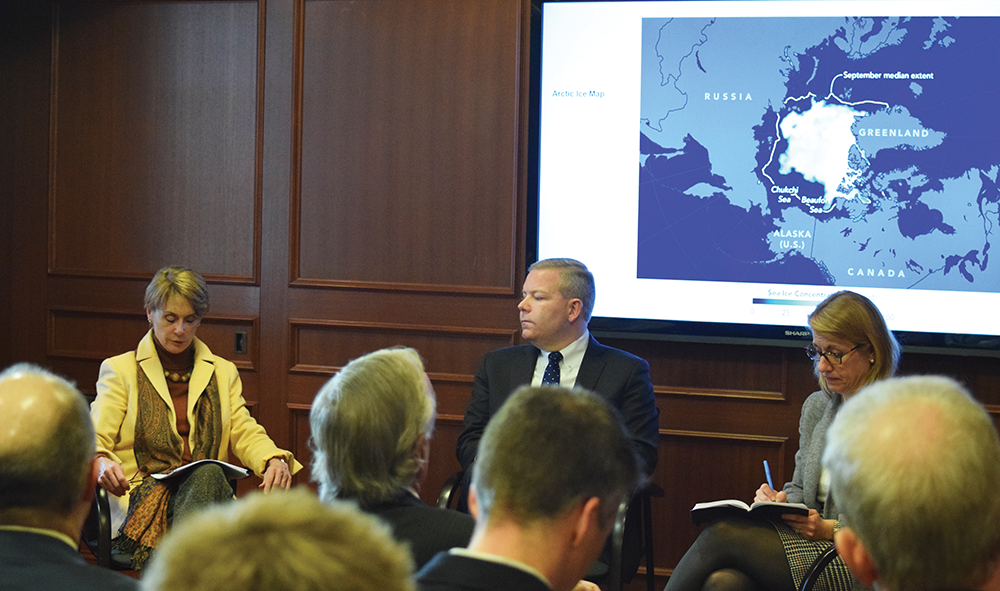 Climate change will have drastic economic, political and military consequences worldwide because of its effects on the Arctic, members of a university working group on the Arctic said at an event on Wednesday in the Mortara Center.

The panel included Director of the Institute for the Study of Diplomacy Ambassador Barbara Bodine, professor of environmental policy Jeremy Mathis and Director of the Europe Program at the Center for Strategic and International Studies Heather Conley. The working group released a report in July entitled “The New Arctic,” detailing the changing environment of the Arctic.

The report studied the long-term effects of climate change, including the effects it will have on indigenous populations. The changes in the Arctic cannot be reversed, and they will have lasting political and economic impacts on the entire world, Bodine said.

“The Arctic is drastically changing and there is no turning back at this point,” Bodine said. “And there’s probably nowhere where the effects of climate change and what it means for economics, trade, the environment and security all comes together and is more pronounced than in the Arctic.”

Climate change directly relates to the increased incidence of major storms, droughts and threats to the livelihoods of indigenous communities within the Arctic, according to Bodine.

The global threat of climate change is physically more pronounced within the Arctic Circle, according to Mathis, who said that the Arctic is warming at twice the rate of the rest of the planet.

“We know that the permafrost is thawing, we know the glaciers are melting, we know all these physical changes are happening,” Mathis said.

The landscape of the Arctic is undergoing unprecedented and massive changes, evident in the form of melting ice, Mathis said.

“We’re running out of adjectives to describe what’s happening in the Arctic,” Mathis said. “Every year we think, ‘This can’t change faster than it’s changing now,’ and then we step into a new reality that we didn’t quite predict and understand, and then it gets worse the following year.”

The Arctic is emerging as a future focal point of economic competition because of its accessible resources such as oil and natural gas. Infrastructure is needed to support these emerging resources, Bodine said.

“The U.S. geologic survey estimates that the Arctic contains 1,670 trillion cubic feet of natural gas, and 90 billion barrels of oil,” Bodine said. “This, however, is not going to happen overnight. It’s going to take at least 20 years for these minerals and these resources to come onto the market. The reason for this is that there is scant infrastructure in the Arctic region.”

The management of the newly accessible resources needs to be addressed multilaterally, according to Bodine.

The United States lacks a significant policy towards the Arctic, but will need to develop one to protect its national security, Mathis said.

The working group hopes that producing this report will help educate the public about the Arctic’s importance as a region, Bodine said.

“We need to make a much better effort to communicate with and inform and educate the American public … on what is going on in the Arctic: that it is not the land of Santa Claus and reindeer; it is not a frozen inhospitable wasteland,” Bodine said. “It is the new global commons and what happens there will and is already affecting us. We need to be prepared to take steps.”