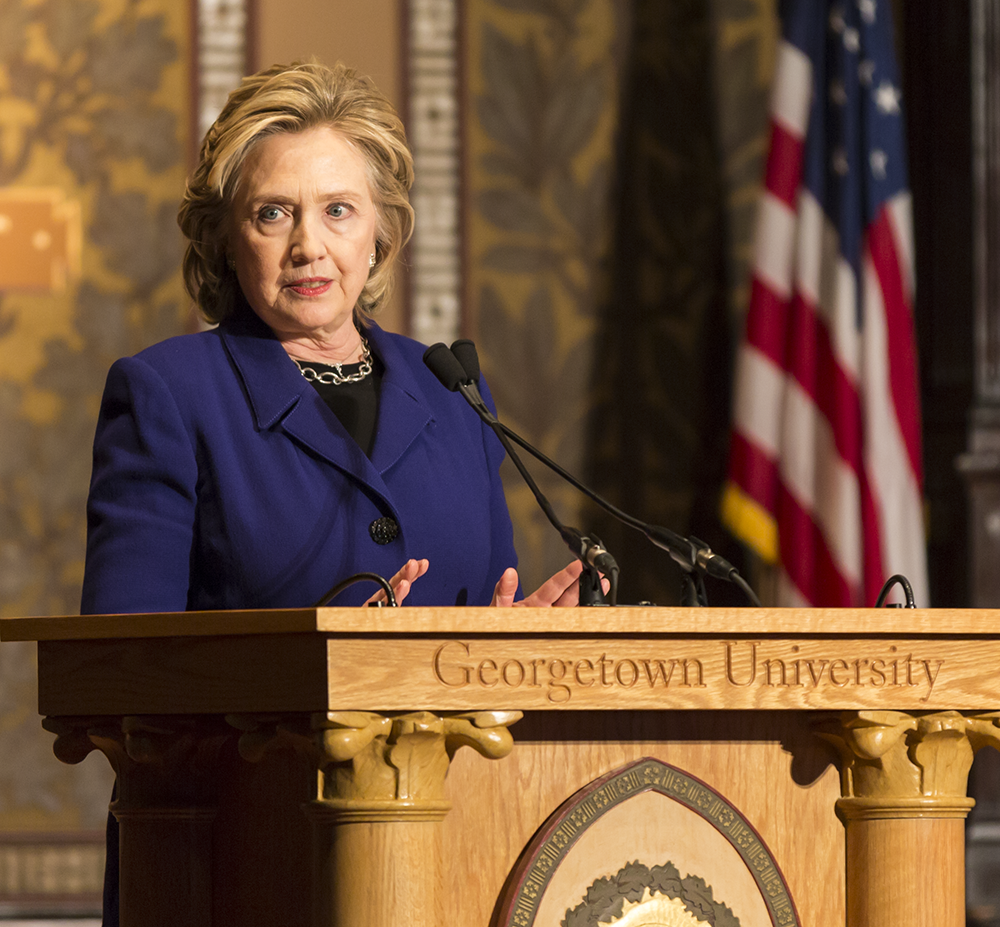 Presidential candidate Hillary Clinton pledged to address sexual assault on college campuses during a “Women for Hillary” meeting at the University of Northern Iowa on Monday, making her the first 2016 contender to formally discuss the issue at a campaign event.

“As president, I’ll fight to make sure every campus offers every survivor the support she needs and will make sure those services are comprehensive, confidential and coordinated,” Clinton said at the event. “It is something deeply important to me to try to work together with everybody to bring about the changes that are necessary in behavior and attitude.”

Clinton’s plan, which remains nebulous, included three broad goals: to increase accessibility and transparency of support resources for survivors, to develop fairer treatment for both accusers and the accused and to improve preventative programming.

“Rape is a crime wherever it happens, and schools have an obligation — I think it’s both a legal obligation and a moral obligation — to protect every student’s right to get an education free from discrimination, free from fear, particularly as to one’s safety,” Clinton said.

Although Clinton did not provide concrete policy plans or methods of implementation, she recommended improving education in high schools to create a safer college culture.

“There are the issues of responsibility and respect that start long before students arrive on campus. I don’t think it’s enough to try and get a better response once an assault has happened,” Clinton said. “We need to stop sexual assault from happening in the first place, and we need strong prevention efforts to change attitudes associated with violence.”

Clinton’s speech came in the footsteps of President Barack Obama’s “It’s On Us” campaign. Launched in September 2014, the campaign aims to raise awareness of sexual assault on college campuses. Nearly one year after its launch, the campaign has thousands of members, including notable corporate partnerships with companies like MTV and Snapchat.

Take Back the Night President Maddy Moore (SFS ’17) said she is optimistic about other candidates creating platforms that look at sexual assault on college campuses as well.

“It’s really important that Hillary Clinton is bringing this topic up, and I think there’s a lot to how student activists have built momentum around the issue throughout the last years, so I think it will continue to be an issue that is brought up by the other candidates and hopefully candidates will create really strong platforms around the issue,” Moore said.

Amanda Shepherd (SFS ’18), campus lead for Hoyas for Hillary, a Georgetown student organization of Clinton supporters, also praised Clinton for bringing the issue of sexual assault into the presidential race.

“I am very happy to see Secretary Clinton take a stance on the important issue of campus sexual assault, but more importantly I am happy to see her propose ways to change the way in which college campuses support survivors,” Shepherd wrote in an email to The Hoya. “Hillary Clinton prioritizing this conversation and stating her dedication to aiding universities in addressing this debate brings it to the forefront of the political world and gives me hope that with her in the White House, survivors of sexual assault will receive the support they deserve on campuses and nationwide.”