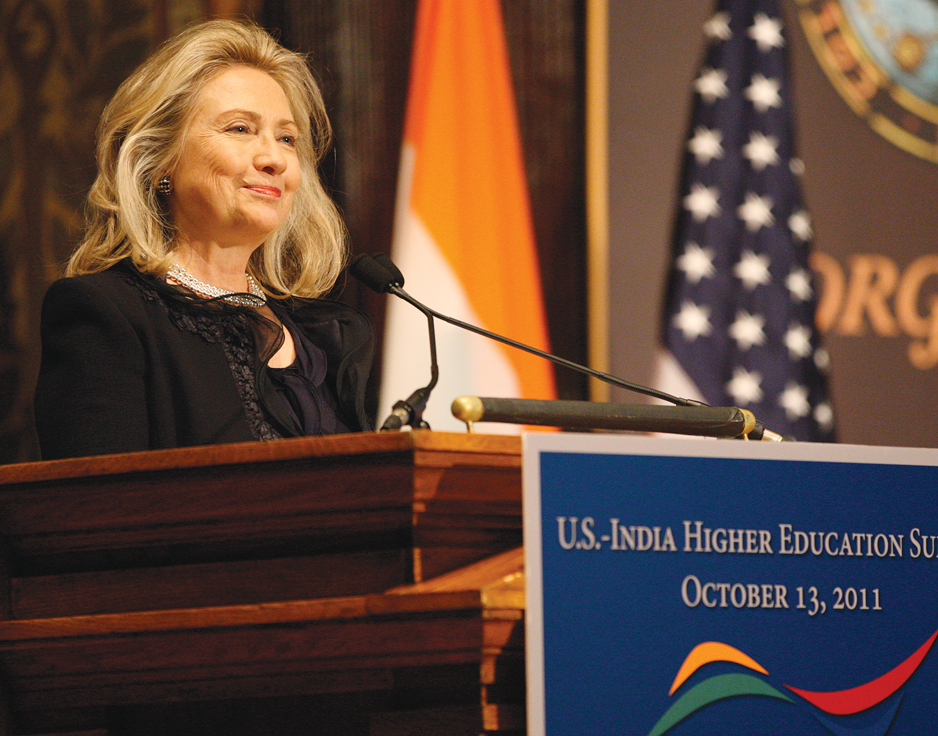 U.S. Secretary of State Hillary Clinton directly challenged the throng of students crowding the upper floor of Gaston Hall this morning to work toward improving the system of higher education in India.

“A democracy depends on education and an educated citizenry. At the highest levels of government, we are committed to this, but the success of these efforts will be determined by you, those outside government,” Clinton said.

Speaking for about 10 minutes to a packed crowd of Indian and U.S. government officials, university faculty and staff and about 150 students, Clinton recounted her own college years.

“When I first started out at Wellesley, I wanted to win a Fulbright to India. Unfortunately, due to political reasons that program was suspended,” she said. “But now, [years later], I see higher education as an even greater passport to opportunity and understanding.”

While she began with a quip encouraging students to join the foreign service, she proceeded to emphasize how they can also make a tremendous impact through exchanges, internships and service projects.

“We want to see more students enrolling for credit at Indian institutions. I’m asking you to develop direct connections.”

Clinton’s keynote address set the tone for the summit, which is the result of collaboration between President Barack Obama and Indian President Manhoman Singh. She outlined the partnership between the two leaders, which has provided millions of dollars for development between the two countries. She added that the United States has more faculty exchange programs with India, the world’s largest democracy and one of the most rapidly growing economies, than any other country. She emphasized, however, that the burden of improving the quality of higher education in India will fall on the private sector.

“I’d like to challenge all of us to jumpstart these kinds of connections. There is no better way to do it than brainstorm in sessions this afternoon. How can our universities deepen collaboration, work on research and set goals we can work on meeting?” she asked. “What institutional barriers can we and should we break down?”

This partnership is the way of the future, according to Clinton.

“For those of you watching the great rise of India, I hope you are as excited as we are,” she said, before highlighting India’s plurality and potential. “We want these two great democracies to be as interconnected as possible.”