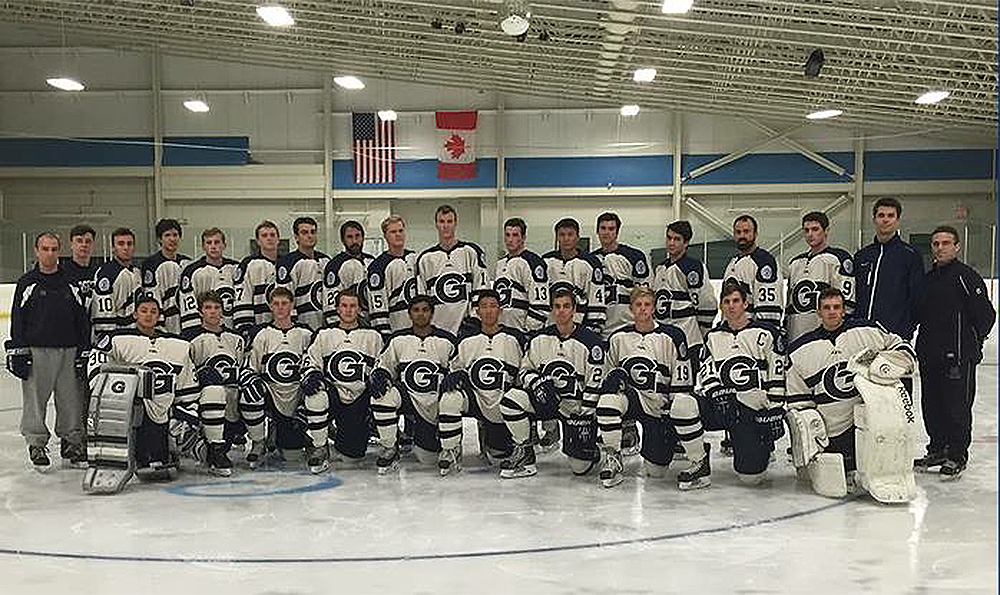 Georgetown lacks a varsity Division I ice hockey team, but a group of 28 players and three alumni coaches are keeping the sport alive on campus.

The team practices twice a week, once on dry land and once at Cabin John Ice Rink in Rockville, Md., 13 miles from campus. In the last 12 seasons, the Hoyas have claimed six league championships, their most recent in 2014. They play teams in the Atlantic Coast Collegiate Hockey League including George Washington, Navy and St. Joseph’s.

“It provides relationships with upperclassmen … keeps me busy and gives me a break from work during the week,” freshman forward Peter Hagerty said.

Senior forward Dan Shea and freshman forward Chris Nolan have been playing hockey since they were kids, starting at five and three years old, respectively. Their lives revolved around hockey, and both said they wanted to continue to play the sport in college.

“[I’ve] always been playing hockey and I wanted a good group of guys to hang out with,” Nolan said. “I knew some kids on the team already and they made me want to join it because they talked about how great it is.”

Shea, one of the team’s senior captains, said the coaching staff has been an integral part of the team’s success. All of the coaches — Adam Willner (COL ’09), Alex Yale-Loehr (COL ’12) and Connor Brogan (COL ’14) — are Georgetown alumni who played for the team. All three coaches declined requests for comment.

Shea appreciates the fact that the coaches are able to handle aspects of the game such as playing time and line combinations, allowing him to focus more on his responsibilities as a team captain.

“We are able to play hockey while letting our coaches take care of our lines and who is or isn’t playing,” Shea said.

As captain, Shea communicates with the school to receive funding for the team, collect dues from the players, create the schedule, make sure the team gets ice time for home games and practices and register with the ACCHL.

“[The coaches] realize that there is more to life than just hockey, which is definitely a good thing,” Shea said.

Nolan said he believes that because the coaches have been in the players’ position before, they put less pressure on the players.

Even though it is a club team, the Georgetown ice hockey team has developed rivalries with other schools.

“Our biggest rival is probably George Washington. Just the fact that we are so close makes it fun, and we have gotten fans to come to our recent GW games, which just brings a great environment to the game,” Shea said.

As a freshman, Nolan is excited to play in his first Georgetown-GW game.

“We want to finish strong in conference play, especially against our rival schools in our division, [specifically] GW; we want to smoke them both times,” Nolan said.

Considering the successful history of the club ice hockey team, Nolan said he hopes the team has the opportunity to compete against Division I teams and get the recognition those athletes receive.

“Everyone wants to play DI hockey,” Nolan said. “A disadvantage [of playing club ice hockey] is not playing against DI teams all the time and get the glory they get, but it’s still pretty fun. It would be nice to have the funding there for a DI team.”