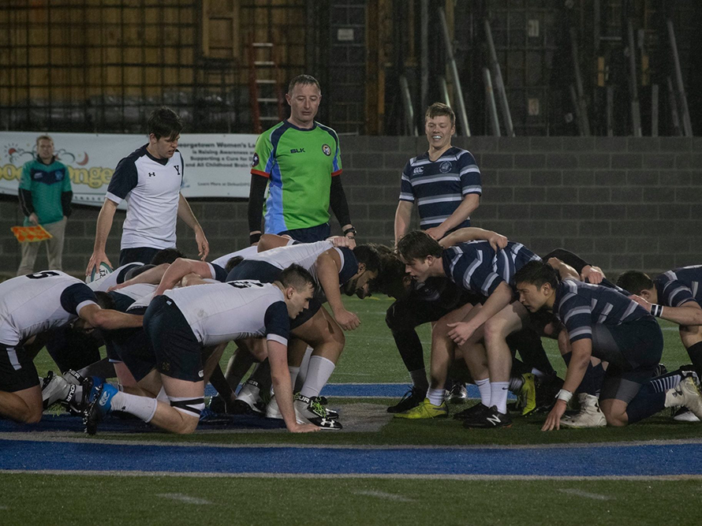 When Sarah Watson (SFS ’23) came to Georgetown University this fall, she was excited to join the university’s Club Rock Climbing team. The high fee to try out for the team, however, forced her to change her decision.

“I was disappointed and embarrassed that, when I first went to tryouts, I realized it would cost over $100 to participate in the initial tryout period,” Watson said. “Having just gotten on campus, not having secured a job yet, I just wasn’t able to even try out.”

Watson’s experience is similar to those of other Georgetown students, as significant budget cuts to all club sports’ funding have led to higher fees associated with teams like Club Rock Climbing.

In March 2019, the Georgetown University Student Association released its intended budget plan for the 2019-20 academic year. The Advisory Board for Club Sports, the second-largest advisory board funded by the university, faced the largest cut from its requested funding at $84,755.

The GUSA finance and appropriations committee received $1,092,000 from the $84 student activities fee for the 2019-20 school year. FinApp divided the $1,092,000 among nine bodies, including seven advisory boards: ABCS, Georgetown Program Board, the Georgetown University Lecture Fund, the GUSA executive, Media Board, Performing Arts Advisory Council, Campus Ministry Student Forum and the Center for Social Justice Advisory Board for Student Organizations.

The initial FinApp draft budget cut ABCS funding by 27.36% — the second-largest budgetary cut of all advisory boards, proportionally speaking. While budget cuts were made to all nine funded bodies, Performing Arts Advisory Council had the largest proportional cut, with 33.33%  — $25,000 — of its requested budget being cut.

Despite appealing the draft budget in March, ABCS was allocated a final budget that was $84,755 less than its proposed budget of $309,755 to run more than 30 club sports. The allocated money for ABCS was $10,000 less than the previous year’s budget.

Budgetary cuts occur for many reasons, but FinApp may not approve of an advisory board’s full budgetary request if the proposed budget does not match the previous years’ spending patterns and is not in accordance with the club’s needs, according to GUSA FinApp Chair Juliana Arias (SFS ’20).

“A lot of boards have a tendency to inflate their request, and we can see from the allocation of past years that they inflate those requests,” Arias said. “We cannot truly satisfy boards when they are requesting budgets that are not reflective of their needs.”

FinApp members expressed similar concerns during deliberation on the proposed budget for the CSJ ABSO, which requested $180,042.96; however, concerns about the leftover $37,000 of unused funds from the previous year led to CSJ ABSO receiving only $156,517.16 for the 2019-20 school year.

ABCS Chair Emily Jonsson (COL ’20) disagrees with the notion that advisory boards and clubs inflate their budgetary requests. When budgets are cut, ABCS only has the funds for basic club sports operations and is unable to allocate funds for new initiatives to build healthier social environments within club sports, according to Jonsson.

“Our request to FinApp last year reflected this need,” Jonsson wrote in an email to The Hoya.  “Any funding we receive unfortunately cannot go towards new initiatives surrounding community building or addressing issues that appear differently in a sports context, such as sexual assault.”

ABCS works internally with all club sports to ensure allocated funds are properly used. At the end of each fall semester, ABCS requests that each club sport submit a budget update. Teams that are not in compliance with ABCS policy are not given a budget for the upcoming fiscal year, according to Jonsson.

In addition to coping with decreased funding, ABCS struggles with internal communication issues that exacerbate budgetary concerns, according to Club Equestrian co-captain Katherine Sargent (COL ’20). Ali Stowe served as the interim ABCS director from the start of the academic school year until Sept. 25, leading to both confusion and a lack of stability within ABCS, according to Sargent.

“The main issue is that there has been a lot of turnover in the club sports board. For a while there was an interim ABCS director, and so it was really difficult at the start of the semester to handle logistics because she didn’t understand how the program was run,” Sargent said.

Funding cuts to ABCS put pressure on club sports to increase dues and remove access to adequate coaching, leading to undue financial and physical strain on nearly all students involved in club sports.

The budget cuts have impacted membership accessibility in club sports across the board, including Club Rock Climbing. A reduction in funding from the university has caused the rock climbing team to increase its dues, limiting socioeconomic diversity within the group, according to Rachel Angle (COL ’20) and Brendan Clark (COL ’20), co-presidents of Club Rock Climbing.

“We understand the financial burden Georgetown has, however, recent cuts have forced clubs to increase dues, leading to underrepresentation of less economically privileged students in club sports,” Angle and Clark wrote in an email to The Hoya.

Financial barriers to club sports participation is a common challenge among club teams. Georgetown’s Club Equestrian team has faced heavy budget cuts in recent years, causing dues to rise from $550 per semester for competing members to $825, according to Club Equestrian co-captain Elsie Coen (COL ’20). (Full disclosure: Coen previously served as a Copy assistant for The Hoya.)

The ABCS also imposed a 15-member cap on the club, which has created further barriers to participation, Coen said.

“This is the first year we’ve had to do tryouts,” Coen said. “We had around 20 or 25 people interested in the team, and we did have to cut a handful of those because we cannot accommodate that many.”

Dwindling membership and high dues are not the only consequences of budget cuts, as students’ health can be impacted due to a lack of funds for trainers and bus services.

Men’s Club Rugby no longer has a trainer at all team practices or games, a shortage that has increased the risk for serious injury, according to Mark Ingram (COL ’20), captain and former president of Men’s Club Rugby.

“As a high impact sport, if our players don’t get the practice reps they need, they get hurt in games,” Ingram wrote in an email to The Hoya. “This has actually translated into more injuries than we’ve ever had this season with 3 different players breaking their collarbones.”

Men’s Club Rugby plays in a competitive Division I AA conference, in which other teams have budgets as high as $40,000, according to Ingram. Georgetown’s team, however, receives about one-quarter of that amount. The team’s budget took about a $3,000 budget cut this year compared to last year, which has made it impossible for the team to hire buses to travel to games, according to Ingram.

“Driving buses for as much as we have to is a threat to our safety because we have to drive 5 hrs to get somewhere, play up to 120 minutes of a physically strenuous and possibly dangerous sport, then drive 5 hrs back to Georgetown,” Ingram wrote.

From Club to Varsity

For teams like Club Equestrian, becoming a varsity sport could be an option to increase the budget. Varsity sports at Georgetown yield a significantly higher budget compared to their club counterparts: $39,908,405 for the 2017-18 academic year.

Universities like Dartmouth College, Brown University and Cornell University all have an equestrian varsity team, and the latter two are in Division I of the National Collegiate Equestrian Association. Georgetown’s club team does not currently compete in the NCEA but competes in a league of the Intercollegiate Horse Show Association, an intercollegiate equestrian organization.

Georgetown Club Equestrian’s biggest competitor in its IHSA league is Goucher College, a private undergraduate school in Baltimore that has a varsity equestrian team, according to Coen. Becoming a varsity team could allow Club Equestrian to remain competitive, Coen said.

However, the process of becoming a varsity team is complicated, as it requires intense communication and negotiation with the university, according to Coen. Transitioning to being a varsity sport would be difficult for Club Equestrian because of the lengthy and complex process that the adjustment would entail.

When it comes to introducing new varsity sports, increasing the number of varsity sports beyond the current 29 offered at Georgetown remains a possibility, according to university spokesperson Meghan Dubyak.

“We also have more than 1,000 students who are participating in recreational sports through more than 30 club teams,” Dubyak wrote in an email to The Hoya. “As a University, we continue to pursue additional varsity sport offerings to expand opportunities that are in alignment with our mission and resources.”

Moving forward, receiving varsity funding for Club Equestrian would significantly expand the opportunities available to the team, according to Coen.

“This season and last year have been our most successful for sure,” Coen said. “Even without varsity funding, Club Equestrian is able to perform well against varsity teams like Goucher. With varsity funding and all the benefits that it brings, like owning a ranch and being able to host competitions at it, the club’s level of success has to potential to escalate greatly.”