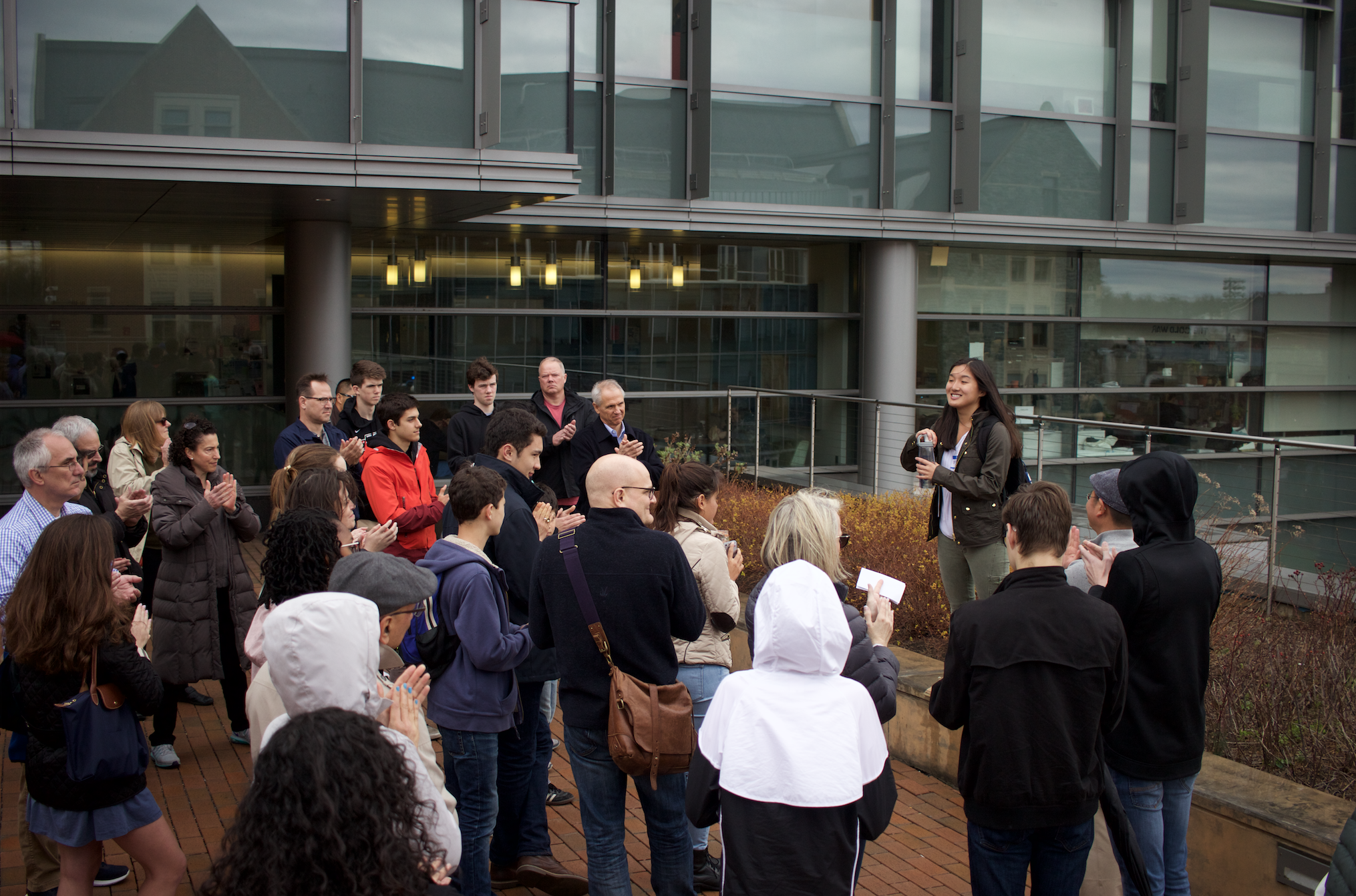 Every Hoya could most likely recite some version of the following: Without the traditional social structure of recognized Greek life, clubs become the hub for your social life.

Yet Georgetown’s club culture is a double-edged sword. Fueled by a desire to meet the right people and find lifelong friends, students swarm to sign up for countless clubs, only to be faced with an application process where acceptance rates for some clubs are rumored to be lower than the university’s.

Unfortunately, the pace of college life and sheer volume of applicants makes feedback a rarity in these processes, leaving students wondering what they did wrong to be deemed unsuitable for a club.

In recent years, the Georgetown community has recognized the negative implications of club culture and has taken steps to alleviate the pressure. This semester, the Council of Advisory Boards followed its standard fall fair with a second fair, which solely hosted clubs without applications.

To further combat the perceptions of exclusivity and superiority, many of the largest organizations on campus, such as Students of Georgetown, Inc., commonly referred to as The Corp, stopped releasing acceptance rates two years ago. Prior to this freeze, The Corp had an acceptance rate of 18 percent in the fall of 2015.

The Corp CEO Alex Gong (SFS ’20) hopes the change will counter the perception that club exclusivity is linked to social capital.

“A consensus among the club leadership community in recent years is that by releasing acceptance numbers or interview numbers, you perpetuate the idea that exclusive clubs are the ones you want to get into and that it is some kind of accomplishment if you get an interview or got in,” Gong said. “The reason The Corp hasn’t released its application numbers in recent years is we don’t want to be categorized by that metric in any way, shape or form.”

This fall, The Corp took more steps to help applicants better understand what they are looking for, releasing a handbook to explain the hiring process and how applicants are evaluated.

“We tried to be a little more forthcoming about what to expect because it is kind of an enigma to a lot of incoming freshman especially,” Gong said.

Like The Corp, the Blue & Gray Tour Guide Society has adapted its application process in recent years. Two years ago, Blue & Gray began offering first round interviews to all applicants, in an effort to account for applicants who may fare better in person than in writing, according to Blue & Gray recruitment coordinator Aidan Fallon (SFS ’19).

The latest update to Blue & Gray’s hiring policy, enacted for the fall 2018 cycle, excludes first-semester freshmen from the applicant pool. This new policy aims to improve the readiness of incoming tour guides, according to Fallon.

“These considerations include ensuring the ability of applicants to speak from personal experience on tours, allowing freshmen students a full semester to transition to college before diving into the application process, and the comfortability of applicants in navigating the campus prior to leading tours,” Fallon wrote in an email to The Hoya.

While these changes aim to have an immediate effect on club culture at Georgetown, other organizations have taken more long-term initiatives.

The Lecture Fund plans to review their applicant pool in the future by compiling data to address trends and maximize outreach to underrepresented groups, according to Chair of Lecture Fund Nicole Heitsenrether (SFS ’19).

To be more inclusive in the short term, Lecture Fund announced last fall that it would start dialogues with the community through general member forums.

“Several times a semester, we will host these open general body meetings for students to come and voice their opinions and ideas because central to Lecture Fund’s mission is making sure that we are engaging students from all across campus,” Heitsenrether said.

For Georgetown University Eating Society, the club’s operational budget determines the number of students accepted each semester, according to GUES co-founder Brittany Arnett (COL ’19). As an unrecognized club,  GUES receives no funding from the university, according to Arnett.

“GUES has applications, which I know may sound a bit weird because we are an eating society,” Arnett said. “The reason we have applications is we aren’t recognized by the university, so we can’t use the university’s name and we can’t get any university funding.”

Blue & Gray bases its hiring numbers on the number of guides needed to give tours. Historically, their hiring classes have averaged between 20 and 30 new guides per semester, and approximately 15 new guides for the summer cycle. The capacity to train new guides is another factor that impacts hiring rates, according to Fallon.

“Specifically, we seek to ensure that we have sufficient mentors, with corresponding availability, to act as liaisons in the training process and the availability of tours throughout the semester to train during,” Fallon wrote.

For Hilltop Consultants, the size of each hiring class, typically ranging from eight to 15 students, is based on the number of active projects and clients, usually around six or seven, according to Director of Operations Clyde Shepherd (SFS ’19). This semester, Hilltop Consultants hired 12 new student consultants, Shepherd said.

“We don’t have a strict limit on how many people we are going to hire in any given semester,” Shepherd said.

For the Lecture Fund, membership is capped to enhance productivity. However, Lecture Fund does reserve spots for the spring, to ensure there is a continual cycle of new people.

“On the associate board, we are capped constitutionally at 30 students,” Heitsenrether said. “Once you get beyond that point, discussions tend to be less productive because there are so many voices in the room.”

A Method to the Madness

Whether you want to make coffee, consult on social issues, bring prominent speakers to campus or simply eat food with friends, the core of the application process is essentially the same. All six of the clubs consulted for this article require a written application component followed by a possible interview — an unsurprising revelation, as the steps to join a club on campus mirror the professional hiring process, alluding to Georgetown’s pre-professional culture.

In response to concerns about the structure of students selecting other students, many clubs on campus, including Blue & Gray, The Corp and Hilltop Consultants, have taken steps to combat subconscious biases.

At The Corp, all applicants must answer the same core questions, with supplemental questions specific to their service of choice, Gong said. For example, applicants to Corp Marketing must submit a portfolio or answer marketing-strategy related questions.

“We try to get a sense right off the bat about who you are and what you’re interested in,” Gong said. “Then, every service has their own set of questions that attempt to gauge the specific skills or capacities that an individual would have coming into the service.”

For the Lecture Fund, each candidate is interviewed individually by a small panel of associate board members, then in a group, with the goal of shaping a diverse hiring class to limit bias in the event planning the organization does, according to Heitsenrether.

“What we are really looking for is sourcing a diversity and uniqueness of viewpoints that will enhance our discussion as an associate board, making sure we don’t have blinders on in terms of types of events,” Heitsenrether said.

For the Georgetown University Alumni and Student Federal Credit Union, the most important aspects of the hiring process are getting to know each applicant and making sure each applicant has a clear sense of why they want to join the organization, according to Graham Ritter (MSB ’19), GUASFCU’s Chief Communications Officer.

“It is really important to us that we spend more than 15 minutes with each person we are giving an interview because there really is a lot to learn about people,” Vogelzang said.

While the club application process may seem daunting, organizations hope that regardless of the outcome, candidates walk away having learned something or made a new connection.

“This year we have done group interviews of six people because we want to mimic a dinner event and see how people interact,” Arnett said. “Our hope with the group interview is regardless of if you get into the club or not, hopefully at least you’ve made a friend through the application process. At the end of the day, that’s our goal, that everyone meets new people.”

Gong said he hopes increasing transparency about hiring processes and the limits on club resources will create a shift in the overall culture.

“It is not an issue of them personally excluding people, it’s an issue of the community as a whole ascribing too much social capital to a given number of organizations,” Gong said. “Even before students get on campus, they have a sense of what the major organizations are, which I think is really damaging.”