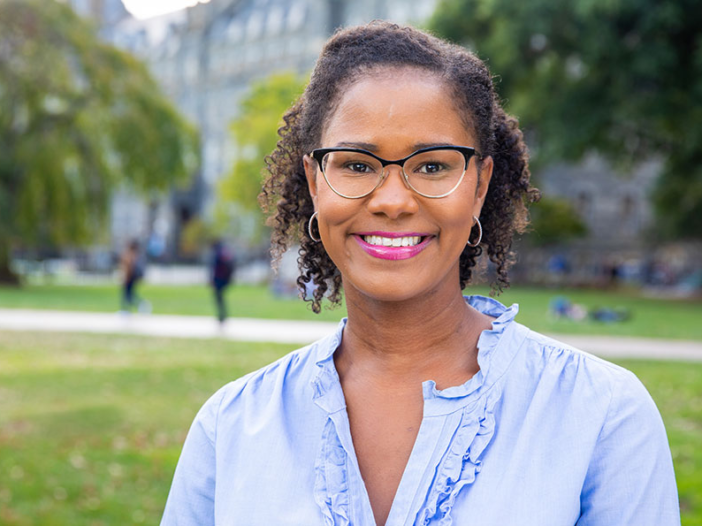 The university announced the appointment of Director of Theater and Performance Studies Soyica Colbert (COL ’01) as a vice dean of faculty in an email to the community Oct. 11.

Colbert will join a team of four other deans, including two vice deans of faculty, the vice dean of graduate affairs and diversity and inclusion, and the vice dean for undergraduate affairs. While Colbert will begin her new role in the spring, current Vice Dean of Faculty Deborah Phillips will continue working with the office until the end of her term in June 2020.

Even though Phillips and Colbert will overlap terms in the spring, Colbert will share the role with professor David Edelstein, the other current vice dean of faculty.

Vice dean positions are a two-year commitment with an optional additional year, according to Georgetown College Dean Christopher Celenza. Celenza and his team began their search process last spring in preparation, he said.

“All of us on the team knew that there were going to be some changes going on and so we all talked about it together,” Celenza said in an interview with The Hoya.

While ultimately Celenza’s decision, the choice to add Colbert to the vice dean team was a group effort, according to Phillips.

“We all sat around and thought about who would be really ideal for this position. It’s a challenging position that really draws on a lot of personal capacities,” Phillips said in an interview with The Hoya. “We all felt that Soyica would be an ideal person and we’re all absolutely thrilled that she has accepted the position.”

Hamza Atumah (COL ’20), who has taken two courses with Colbert, hopes that her approachability and accessibility to students will continue in her role as vice dean.

“I think she really goes out of her way to push the limits of what students see in themselves as well as to hold them to higher expectations so they don’t at least lose that within themselves,” Hamza said in an interview with The Hoya. “She’s good at doing that, especially for students who are trying their hardest to take an initiative.”

Colbert attributes many of her successes to her desire to work across many fields.

“Throughout my career, working collaboratively has been key to my development.” Colbert said in a university news release. “In my new role, I look forward to working with colleagues across the arts and sciences to realize our visions for a justice centered College of the twenty-first century.”

Colbert and the other vice dean of faculty are responsible for overseeing the College’s 16 departments and 12 interdisciplinary programs and managing department hirings throughout the year. Since Colbert will share her role with Phillips until June, their exact responsibilities have not yet been determined, Celenza said.

Phillips hopes her shared semester with Colbert can be a helpful learning experience for both professors, Phillips said.

“My goal for the spring, as I said, is to make sure she’s fully equipped to hit the ground running when I’m no longer in the office,” Phillips said. “And I feel very, very fortunate that she’s willing to spend a semester working alongside me.”

One of the many reasons that Celenza wanted Colbert as a part of his team was her experience as chair of the department of performing arts, he said.

“It’s a very diverse department and it’s a very important department and the fact that she chaired it so successfully was really important on that front,” Celenza said. “They combine theater and music, as well as public speaking, and dance, but they also combine a lot of different types of things that are in some ways unusual and helped her flex more muscles as a chair.”

Because the arts are a central part of the College, Colbert can use her experience to create new collaborative opportunities and develop a joint performance lab with the School of the Foreign Service, according to Celenza.

“One of the things we really need, and that she would be positioned to do very well, would be a vision for the arts at Georgetown,” Celenza said. “Most of the arts are situated within Georgetown College, and I am convinced that the arts are really good here and they’re better than sometimes that reputation gives us credit for.”