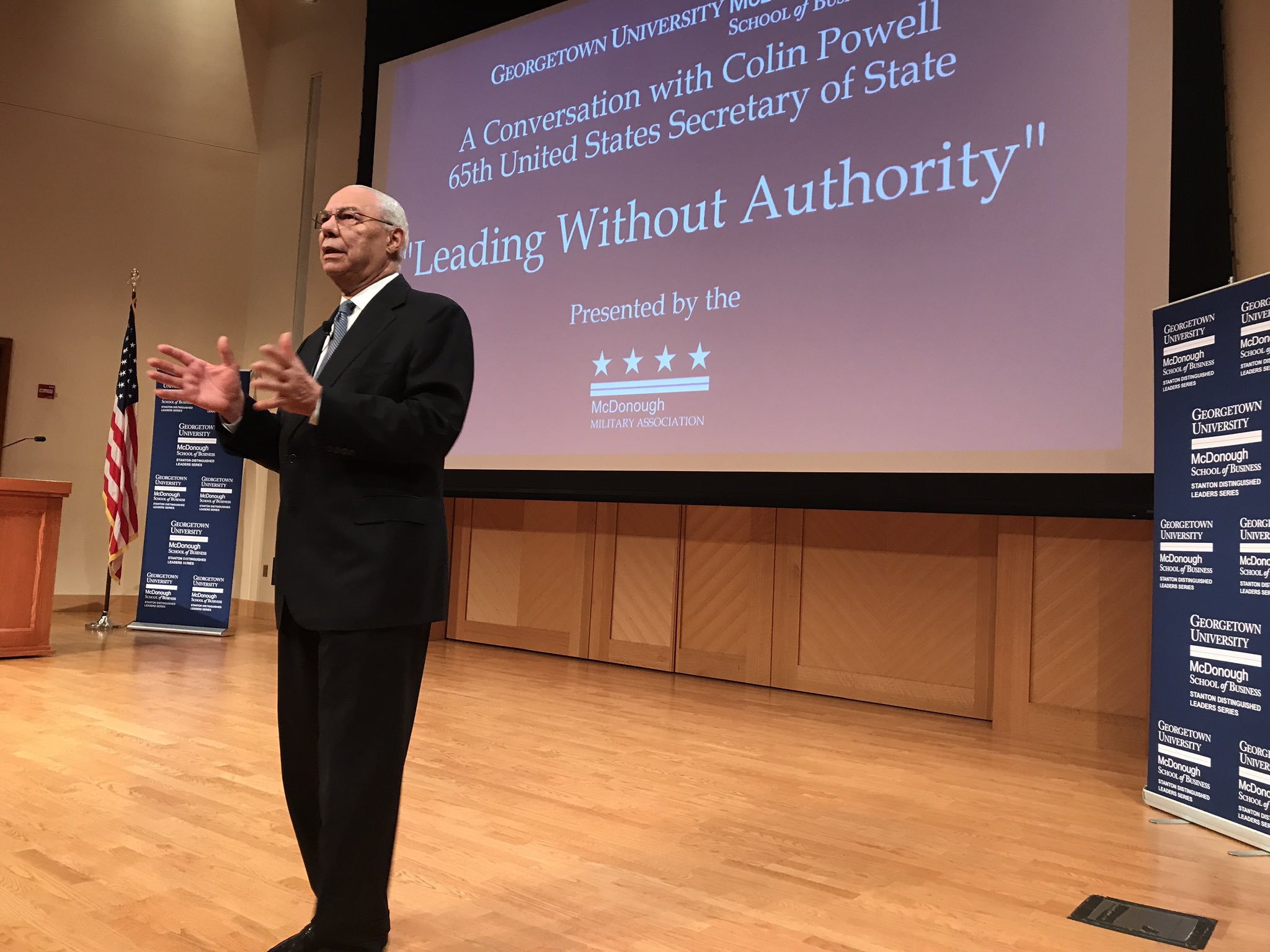 Colin Powell, former secretary of state under President George W. Bush, said the United States will “come through” its struggle to fully accept immigrants in a speech in the Fisher Colloquium on Wednesday.

“Right now we’re having some diversity problems because of certain political issues we can go into, but we’ll come through that,” Powell said in the speech covered exclusively by The Hoya. “We are a nation of immigrants. We are a nation of diversity. And we’ve had trouble with diversity over the years, and we still have trouble.”

He added that political circumstances will not stem the tide of an increasingly diverse society.

“Whether the political system likes it or not, it’s happening. It’s going to continue to happen. We are a vibrant economy because of immigration,” Powell said.

He also alluded to problems with U.S. immigration policy by comparing citizenship requirements in the United States to the strict policies in Switzerland and Sweden.

“You can go to Switzerland, and it’ll take you forever to become a citizen, and you probably won’t make it. Same thing with Sweden: Look at the trouble they’re having with their immigrants. We have trouble with our immigrant policy, and I wish we could get an immigration policy that makes sense,” Powell said.

Powell’s remarks came in response to an audience question at an event titled “Leadership Without Authority,” the first in a McDonough School of Business speaker series of distinguished leaders. His speech included anecdotes from his 2012 book, “It Worked for Me: In Life and Leadership,” and tips on effective leadership that he learned through decades of public service.

A retired four-star general who served in the Reagan, Clinton and Bush administrations after 35 years of military service, Powell was commissioned as a second lieutenant in the Army in 1958 as a member of the first generation of recruits to serve in a fully desegregated army.

Noting America’s complex historical relationship with immigrants, Powell told the packed crowd that his own personal story is a testimony to the American dream. Born in Harlem to Jamaican immigrant parents who first arrived through Ellis Island, Powell went to school in the South Bronx and attended the City College of New York, a public university where 84 percent of students are nonwhite.

“Most people were the first in their family to go to college, or even finish high school,” Powell said. “There ain’t no legacy students they have to take care of.”

In 2013, the college opened the Colin Powell School for Civic and Global Leadership in Harlem. Powell said he was proud to start as a “street kid” and achieve as much as he did. When he visits his alma mater, he tells graduating students not to send their own children there, too.

“Go find somewhere else to send them,” he recalled saying. “This school is for the Ellis Island kids.”

On leadership, Powell said good leaders do not gain authority through titles or formal powers, but through building relationships of trust.

“You don’t get authority from above, you get authority from the people whose lives you control. You can’t be a good leader if your followers don’t believe in you,” Powell said. “If you’ve created that bond of trust, they’ll do anything you ask of them.”

According to Powell, these bonds of trust give leaders power up and down the chain of command, whether they have formal authority or not. He shared an anecdote from his time as national security adviser to President Ronald Reagan, when he was in the Oval Office briefing the president about a troubling situation. As Powell expounded on the complexities of the issue, the president remained silent, irking Powell, who expected the president’s input.

Then, finally, the president hopped up out of his chair.

“And then he said, ‘Colin, Colin, look: The squirrels came and got the nuts I put out in the Rose Garden,’” Powell said. “He was telling me he trusted me, he hired me, he knew I could handle it.”

To work effectively with followers, Powell said strong leaders must first discover what their deputies are capable of handling on their own.

“Your job as a leader is to make sure you’ve identified that range, and then give it to them,” Powell said. “Trust them.”