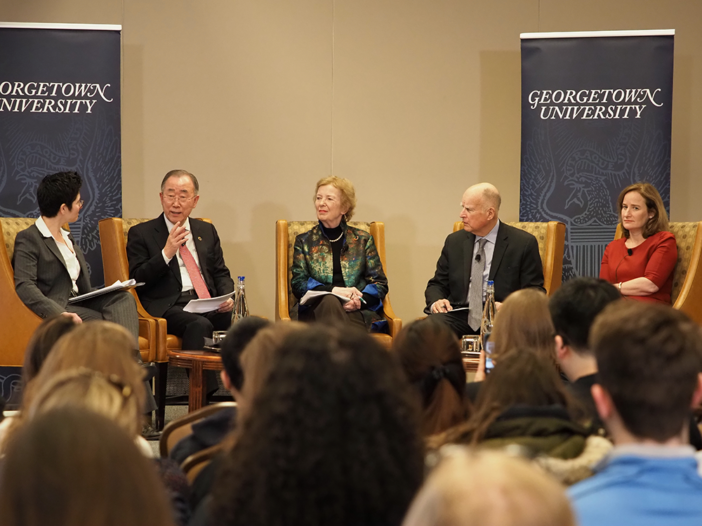 A panel including former United Nations Secretary-General Ban Ki-moon discussed the move of the Doomsday Clock to 100 seconds to midnight at an event Jan. 23, attributing the updated time to the increasing threats of climate change, nuclear war and a reactionary media climate.

The Doomsday Clock was established in 1947 by the Bulletin of Atomic Scientists and the Elders, a nonprofit organization that analyzes international security issues. The clock serves as an indicator of global threats. As the minute hand approaches midnight, the world metaphorically approaches apocalypse. The Bulletin and its Security Board updates the minute hand of the clock on an annual basis based on the severity of global crises.

To remedy these crises, concerned global citizens need to approach current events through an international perspective, according to Ban.

The event was hosted by Georgetown University’s conflict resolution program in collaboration with the Bulletin of the Atomic Scientists and the Elders. Joining Ban were former Irish President and United Nations High Commissioner for Human Rights Mary Robinson, former Governor of California Jerry Brown and Bulletin of the Atomic Scientists President and CEO Rachel Bronson. The panel was moderated by conflict resolution program Director Desha Girod.

The pushing of the clock closer to midnight comes as global political institutions have struggled to reach resolutions to modern international crises, including climate change and nuclear proliferation, according to Bronson.

“As our board was putting that together, what they really focused on was the worsening challenge but really the capacity to deal with these problems is deteriorating,” Bronson said. “The multilateral environment that is required to solve these big global challenges is being dismantled before our eyes. We are going to need to find ways to collaborate across the globe to tackle these huge challenges that we face.”

Recent nuclear tests by North Korea and the dismantling of the Iran Nuclear Deal have brought the issue of global nuclear proliferation to the forefront. In 2011, the New START treaty, a nuclear arms reduction treaty, was ratified by the United States and Russia.

The New START treaty must be renewed by the U.S. House of Representatives to prevent nuclear disaster, according to Brown.

“No START, no budget,” Brown said. “Force the House of Representatives to vote no on the budget unless Trump signs the extension of New START.”

International governments also need to take action to prevent climate change and citizens should hold their elected officials accountable for failing to address the climate issue, according to Robinson.

“On the climate issue, every country should be taking its responsibility and those more responsible should be taking more responsibility. Until we make it uncomfortable for governments not to act, they won’t act,” Robinson said. “We have governments with elected representatives, and elected representatives have a big desire to be reelected, and therefore they’re not going to make hard decisions in the meantime.”

“The media only report what they call ‘news of the day.’ That’s a tweet from Donald Trump, a scandal, an accident, but these big questions like thermonuclear war, that’s not news,” Brown said. “It’s very hard to get these kinds of large ideas as news because if you don’t hear it every day, it doesn’t seem as real. We’re in a type of unreality that is engendered by all media communications who provide information. Our first step is that we have to break through that.”