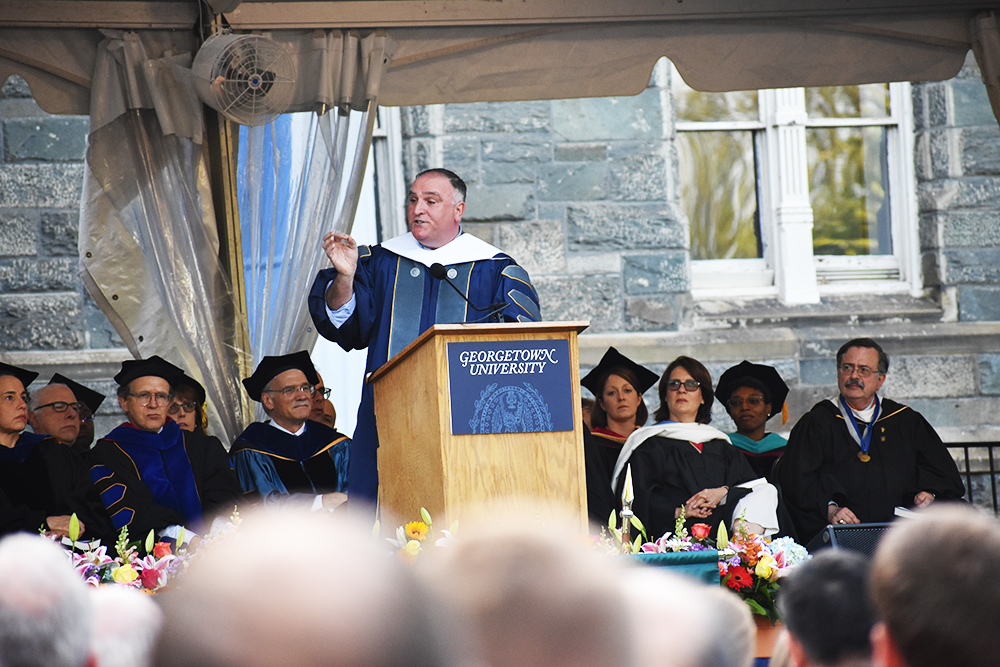 Internationally recognized chef and humanitarian José Andrés extolled the value of collaboration between insiders and outsiders in the public policy world at the McCourt School of Public Policy commencement May 16.

Andrés, an immigration reform advocate and founder of the nonprofit World Central Kitchen, which aids hunger relief efforts, described the value of public policy both historically and in his own life. Addressing the over 170 graduates assembled on Healy Lawn, he described their futures as public policy “insiders,” those with access to the conventional ways of accomplishing change.

Andrés spoke about his experiences as an “outsider” in public policy and humanitarian work, given his background as an immigrant from Spain and nontraditional emphasis on philanthropy in his career as a chef.

“Immigrants like me, we are outsiders, and outsiders see things differently,” Andrés said.

This different perspective is beneficial, he continued, because in situations like the 2010 earthquake in Haiti, for which Andrés’ team provided relief, outsiders may be the ones to act decisively. In the aftermath of the earthquake and other disasters, public policy experts may find themselves caught in bureaucracy. In life or death situations, Andrés said, spreadsheets and meetings are not going to provide immediate solutions, and decisive action from outsiders like himself is necessary.

Andrés relied on an item he knows well as a chef—the “humble tomato —to describe the significance of public policy. Holding up a ripe tomato, which he would later toss into the crowd, he chronicled its trajectory and the role of politics through it.

Tomatoes are botanically fruits, Andrés pointed out. An 1893 Supreme Court case, Nix v. Hedden, however, is what led tomatoes to be considered vegetables under official U.S. government classification. In 1893, vegetable imports carried a 10% tariff, but fruits had none.

John Nix, a produce wholesaler, sued on the grounds that tomatoes are technically fruits, and should not be taxed as vegetables. However, the Supreme Court disagreed, since tomatoes are prepared and eaten like vegetables. This case was only the beginning of the tomato’s spotlight in national policy, Andrés showed.

He alluded to the infamous 2011 Congressional decision that allowed one-eighth cup of tomato paste, a key ingredient in pizza sauce, to continue to be considered equal to one-half cup of vegetables in school lunches. The controversial move echoed a similar proposal from the former President Ronald Reagan administration in 1981 that could have allowed ketchup the same latitude.

“How can pizza be considered a vegetable without the help of some very bad-intentioned policy experts,” Andrés said.

In 1996, Andrés had moved to Washington, D.C. three years prior, and Jaleo, the first of his current portfolio of 31 restaurants around the country, became one of the first restaurants to legally donate its leftover food to feed the hungry after the passing of the Good Samaritan Food Donation Act. Jaleo donated tomatoes, he said.

Andrés recounted the history of migrant tomato pickers in Immokalee, Fla., where farm workers organized for improved wages and working conditions, bringing the conversation about social justice to public policy.

This common thread of tomatoes continues through 2018, when Andrés saw a tweet from Sen. Lamar Alexander (R-Tenn.) that said Alexander brought Tennessean Grainger tomatoes to D.C. Andrés replied to the tweet, and the senator personally delivered a box to the restaurateur. During the visit, Andrés asked Alexander to support a bill for Tennessee school districts to purchase local produce, again making tomatoes a policy tool, Andrés said.

“What is important is that we speak truth to our leaders at every opportunity,” Andrés said. “Public policy itself can turn tomatoes from our biggest challenge to its greatest opportunity.”

While Andrés career and work has been often defined by his position as an outsider, the graduates of the McCourt School will be insiders in the policy world, according to Andrés. Thanks to their Georgetown University education, they will be familiar with the politics and procedures of enacting change. Working with nontraditional characters like himself, however, allows policy makers to combine their skills to find innovative solutions to the world’s difficulties.

“You get to be in the room where it happens,” Andrés said. “Our world needs thinkers and doers that can adapt their skills to tackle humanity’s greatest challenges. Insiders like you, working to make it happen with outsiders like me.”