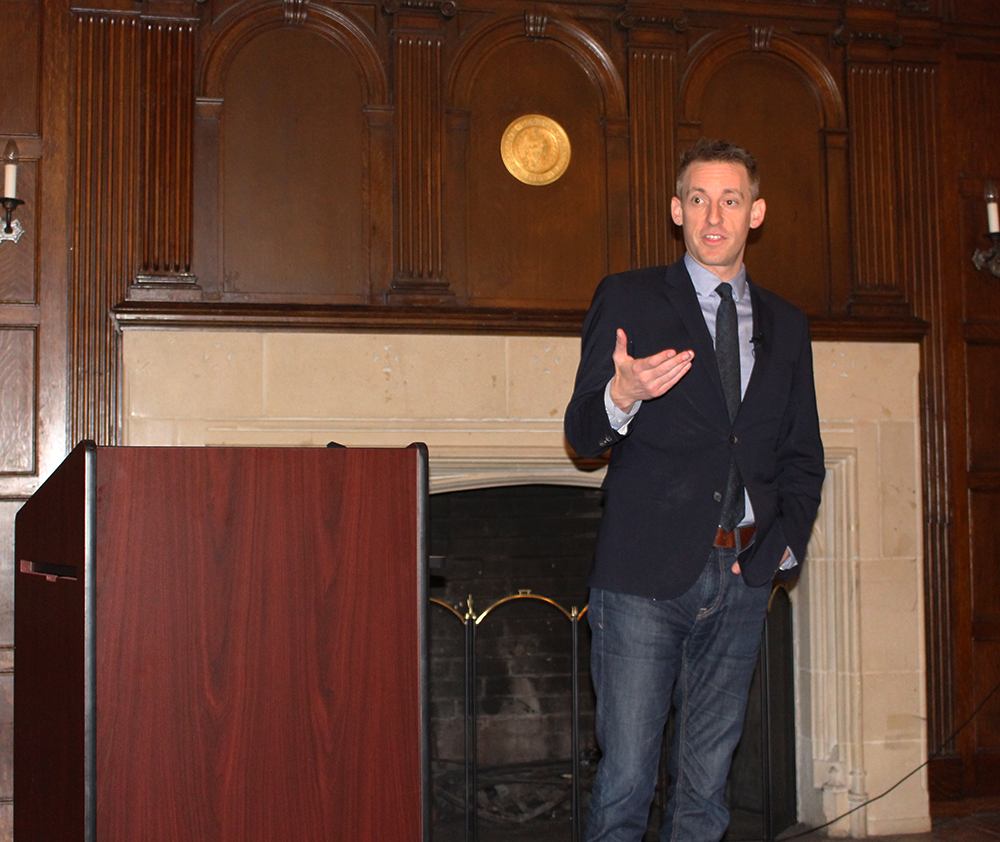 Jason Kander (LAW ’05), former Missouri secretary of state and current president of Let America Vote, received the Alumnus of the Year award from the Georgetown University College Democrats on Monday evening for his advocacy work on voting rights.

After earning his J.D. from Georgetown University Law Center in 2005, Kander served in the Army National Guard and volunteered to serve a tour in Afghanistan. He has also served in the Missouri House of Representatives from 2009 to 2013 and as Missouri secretary of state from 2013 to 2017. After an unsuccessful senate campaign against incumbent Sen. Roy Blunt (R-Mo.) in 2016, Kander founded Let America Vote, a political organization working to protect voting rights around the country.

Kander founded Let America Vote in an effort to protect voting rights and ensure that all eligible voters have equal opportunities to vote, he said at Monday evening’s event.

Contemporary infringements on voting freedoms are attacks on civil rights, according to Kander, who characterized his advocacy efforts as an extension of the civil rights movement.

“We are fighting the same fights. People were marching across the bridge in Selma in order to be able to register to vote,” Kander said.

Let America Vote is a unique political organization, according to Kander, because it is a nationwide lobbying machine for voters, as Big Tobacco is for tobacco firms or Big Pharma is for pharmaceutical companies.

“Until we created Let America Vote, there was nothing you could characterize as Big Voter. So that’s why we created it.”

Kander also emphasized the importance of authenticity in politics. He said Democrats, and particularly students in Washington, D.C., too often take stances they personally oppose, believing there is a perfect “formula” to attract voters, rather than presenting their own views.

“One of the big things that gets emphasized — particularly if you’re a political science major — is what I refer to as trying to ‘crack the code,’” Kander said. “How is it that you’re going to talk about these things or do these things to where it’s going to open up this big can of voters all over the country? What’s the secret formula? There isn’t one.”

Being authentic in politics means remaining committed to the issues that matter to constituents because voters can tell when a politician is not authentic, Kander said.

“They’re winning over a bunch of people who a poll tells them believe in something. What they don’t realize is, those people see bad acting and it makes them uncomfortable, and they know it when they see it, and they’re not buying it,” Kander said. “Authenticity in politics is just knowing what you believe and then going out and actually, honestly making your argument, because the thing is, voters can tell the difference.”

As a politician, it is less about cracking the code to gain voters and more about trying to effect real change for constituents, according to Kander.

“When you get into this line of work, and you’re a candidate, or advising candidates or helping candidates, one way or another, in making a political argument, it has to be based in what you actually believe,” Kander said. “It can’t be based in trying to crack the code.”

Kander also spoke about the future of the Democratic Party, noting that the party aims to provide tangible opportunities for voters.

With Democrats hoping to make big gains in the 2018 midterm elections — and with a crowded potential field in 2020 lacking a clear standout — the future of the party remains an open and important question.

Kander argued that the goal of providing the next generation with a better quality of life than their parents should be a top priority for the Democratic party.

“What we’re all really looking for is for our kids’ lives to be an upgrade over our own, and then for our kids maybe to be able to afford that life near us,” Kander said.