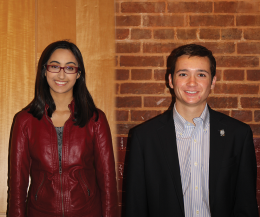 College Democrats and College Republicans will transition their leadership in the coming days, with Chandini Jha (COL ’16) and Patrick Musgrave (COL ’16) winning the chair positions, respectively.
Musgrave, elected Tuesday, ran uncontested and will take over for outgoing chair Alex Cave (COL ’15).
“I was just lucky enough that no one else wanted to throw their hat in the ring,” Musgrave said.
Jha’s election, which took place Nov. 19, was contested, as Kyle Rice (SFS ’16) also ran for the chair position.
Outgoing GUCD Chair Trevor Tezel (SFS ’15) had also run a contested race, against two other candidates. He said there has been an increase in competition since he joined GUCD his freshman year, which he characterizes as a good omen for the club.
“I think that says a lot about our club and the desire to kind of take on a true leadership role within it. It shows we’re an organization that’s important to our members,” he said.
While both the GUCR chair and vice chair positions were uncontested, other positions within the club saw increased competition.
“It was a really great election because we had a lot of people running – some spots had like five people running for them – and I think they were the most contested elections in GUCR history,” Musgrave said.
Musgrave interpreted this heightened interest as indicative of the evolving political makeup of campus.
“Campus is more Republican than one may think, but definitely I think that the Democrats are more active and vocal, and a lot of people when they think politics at Georgetown, they think liberal Democratic politics,” Musgrave said. “And I think this is a good sign that the conservative, and especially conservative young people, are gaining a following on campus.”
GUCD’s elections, unlike GUCR’s, take place online via HoyaLink, which Jha said was more efficient and manageable. The campaigns also took on a distinct online presence this year, particularly on Facebook, but not at the expense of face-to-face time with the candidates. Jha held office hours on the second floor of Lauinger Library to allow members to address concerns and provide suggestions.
“When we have more people, there will be even more people contesting elections next year, so we’ll need to go to HoyaLink elections,” Musgrave said. “That was a good idea that the Dems had.”
Musgrave said that another one of his goals for the term is to further improve GUCR’s relationship with the College Democrats. The two clubs already collaborate on the freshman debate, which is sponsored by College Republicans, College Democrats and Hoyas for Liberty.
“We had [the debate] this semester, and it went very well, as it always does,” Musgrave said.
Jha also said she looks forward to strengthening the clubs’ relationship in the future.
“There are common goals that we have to get people involved in the political process regardless of where their ideology puts them,” Jha said.
Tezel said that GUCD fostered cooperation with GUCR during his term by holding events for the two clubs. However, he said the key to inter-club cooperation was also fostering a personal relationship between the chairs.
Musgrave and Jha will be sitting down in a meeting with outgoing chairs Tezel and Cave, who could not be reached for comment, to discuss the upcoming year, a customary practice that has been happening for years.
“Chandini is going to run a great organization,” Musgrave said. “I’d like to think my organization is going to be very well run too. So I think we’re going to have a very good year of GUCR and GUCD relations.”